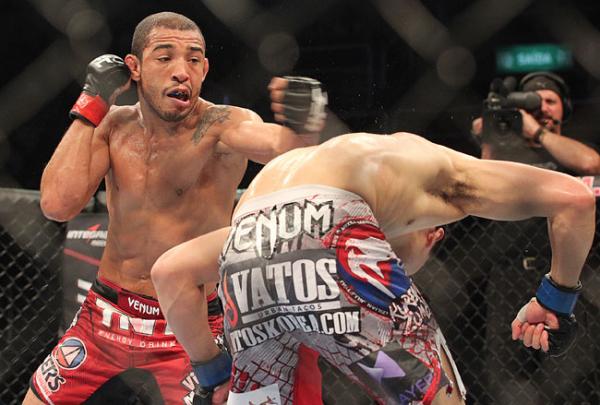 
The world of mixed martial arts never fails to impress the viewer, both in the skill level of the competitors and in the injuries they may suffer.

During the UFC 163 main event on Saturday at the HSBC Arena in Rio de Janeiro, Brazil, Chan Sung Jung threw an overhand right that appeared to catch behind the shoulder of featherweight champion Jose Aldo. Soon after, “The Korean Zombie” winced in pain and held up his right arm at the elbow. Recognizing something was wrong, Aldo immediately turned up his attack. Moments later, referee Herb Dean separated the fighters and declared Aldo the victor, while Jung lay on the mat holding his shoulder in agony.

The vastly more common injury is a separation of the acromio-clavicular joint, which is the connection between the clavicle, or collarbone, and the acromion -- the bump you feel on top of your shoulder. You can actually only feel the ball of the shoulder joint when you go past the acromion, either in front or on the side of the shoulder. When this injury occurs, a large bump appears to pop up under the skin near the clavicle. Since the injury is at the AC joint and not at the ball-and-socket joint, the shoulder is not dislocated and can move freely.

While Aldo was finishing “The Korean Zombie,” a large bump was visible over the top of Jung’s shoulder. In addition, he was moving it around just prior to being taken down after the injury occurred. Both of those signs pointed towards an AC separation and not a shoulder dislocation, which happens when the ball jumps out of the socket. However, as we have since learned, the shoulder was put back into place in the locker room, which means it was a shoulder dislocation; AC separations cannot be put back into place without surgery since ligaments need to be repaired.

The shoulder is held in its socket by the rotator cuff and by ligaments that span the bones. When a shoulder dislocates, it tears off ligaments in the front of the shoulder and, in older people, usually part of the rotator cuff. If only the ligaments tear, sometimes with a piece of bone attached, many people will do just fine without surgery. In fact, many of them can take off their sling and begin moving their shoulder just a week or two after the injury. However, if athletes continue to experience instability episodes in which the shoulder comes out of its socket, they may opt for surgical treatment. In that case, they will need to be held in a sling for a long period of time, and they will have a long, slow course of rehab; the doctor will not want to stress the repair or allow the shoulder tissues to stretch out, resulting in looseness again.

Given Jung’s young age, it is possible he could escape surgery. However, he has already put a lot of mileage on his shoulders -- he has had surgery for a torn left rotator cuff -- and he may have had previous injuries that can all be addressed at the time of surgery. If he sees an orthopedic sports medicine specialist, he will be presented with both options. Should he elect to undergo surgery, it is unlikely we will see Jung stalking his way across the Octagon for at least six months. Until then, the MMA world may be safe from another “Zombie” attack.

Want your question answered by The Fight Doctor? You can contact him by email at [email protected] or find him on Twitter @fightmedicine. You can also read more about MMA injuries at FightMedicine.net.