It’s hard not to be in awe of Tito Ortiz’s head. So imperious in its shape and proportions. So defiantly unbowed. So … well, frankly, so unbelievably mammoth.

If a strangely enlarged cranium doesn’t provide a fighter with infallible protection against knockouts, the so-called “iron chin,” what does? What allows one fighter to absorb a man-killing blow to the face and dooms another to crumple before it? The answer is straightforward and multi-syllabic: the sternocleidomastoid muscles.

The sternocleidomastoids (SCM) -- one on each side of the neck -- are paired muscles, composed of the sternomastoid component that runs from the sternum to the mastoid process of the skull, immediately behind and below the ear, and the cleidomastoid muscle that runs from the clavicle to the mastoid. When flexed, the SCM rotates the head toward the opposing side. Flexing both SCMs in alternation shakes the head “no,” as one might if waving off an overly concerned ringside physician. Flexing them simultaneously flexes the neck forward and extends the head -- in the right circumstance resisting the force of a blow to the face. It’s why fighters often seem to be ducking into a punch.

One can look in a mirror and flex his SCMs, looking a bit like Lou Ferrigno after someone has seriously pissed off Bruce Banner. The muscles are prominent. Unfortunately, they are also isolated; no other significant muscle supports them in resisting backward movement of the cranium. 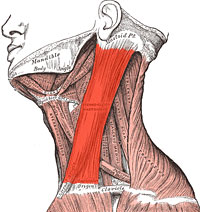 Photo: U.S. Public Domain
Moreover, arrayed against them are the muscles used in throwing a punch: calves, gluts, lats, pecs, triceps, etc. These are some of the most powerful muscles in the body. It is not surprising then that we rarely see the thrower of a well-placed punch to the head grasping his hand in pain and stumbling back in amazement as his opponent casually flexes his SCMs and smiles; the muscular arithmetic is firmly in the thrower’s favor.

When a punch of sufficient force strikes the face, it accelerates the front of the cranium back into the frontal lobes of the brain. This is the irreducible sweet science of brain injury. A gentle blow to the frontal lobes causes various degrees of central nervous system sedation -- it stuns the brain -- and a blow of sufficient force simply shuts the brain off. Seizures are not uncommon.

When a blow to the head comes from an angle, as opposed to straight on, only one of the SCMs can resist the force: The resulting acceleration of the cranium and damage to the brain are thus much greater.

Worse still, when a fighter is struck on the chin, the mandible creates leverage that magnifies the force and damage. This is the phenomenon of a fighter being hit “on the button.” Incidentally, this is an argument why, all things being equal, fighters with large heads and Cro-Magnon-like chins are at a theoretical mechanical disadvantage in withstanding blows.

Lastly, the anatomy of the brain makes blows to the back of the head particularly dangerous. The extensor muscles of the neck are far stronger than the SCMs, but the part of the brain under direct assault is more delicate. The frontal lobes injured in a frontal blow control speech, movement and thought -- all the neurologic skills we see depleted in old boxers. The back of the brain, the hindbrain or rhombencephalon, controls respiration, heart rate, swallowing, blood pressure. Fighters who sustain injuries there never grow to be old.

Matt Pitt is a physician with degrees in biophysics and medicine. He is board-certified in emergency medicine and has post-graduate training in head injuries and multi-system trauma. To ask a question that could be answered in a future article, e-mail him at [email protected].