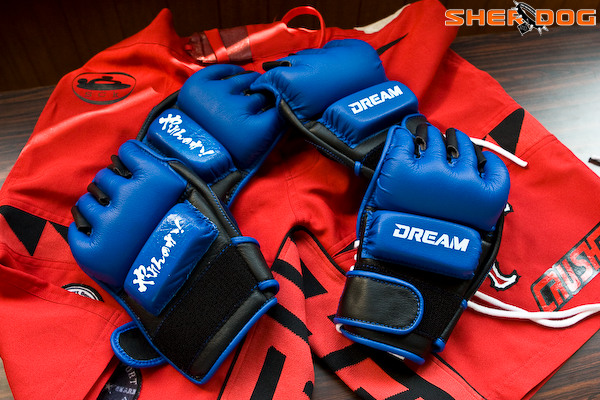 
Before we knew how good Royce Gracie was, we knew Art Jimmerson was in trouble.

As Jimmerson strode to the Octagon to test his boxer’s skill against an unknown underweight Brazilian at UFC 1, he wore a boxing glove on one hand and athletic tape on the other. His fight was lost before it began. In a sport with stiff penalties for uncertainty, fighters deserve to know the pros and cons of modern fighting gloves.

The original boxing gloves were thin strips of leather that Grecian fighters bound about their clenched fists to protect the small bones of the hand against fracture. The Romans added metal spikes and studs, converting the protective devices into weapons, and irreparably linking boxing with brutality and barbarism in the Western mind. When boxing returned to fringe acceptability, fighters quickly learned that bare-knuckle strikers had short careers and painful retirements. Art Jimmerson
In a properly thrown punch, the points of contact are the knuckles of the second and third fingers. With repeated blows the focused trauma leads to injuries to all the structures of the hand, but particularly the knuckles (metacarpophalangeal joints). Sufficiently severe knuckle injuries debilitate the hand. To protect bones, tendons and joints, fighters adopted padded gloves to cushion punch forces and distribute them across the surface of all four knuckles and proximal phalanges. Combined with hand wrapping, in which the metacarpal bones are stabilized by hand muscles flexed in a tight bandage, even minimal padding dramatically decreased hand injuries.

While boxing remained under the control of fighters, gloves remained small and simple, just enough to protect against the injuries most damaging to fighters’ hands and livelihoods.

Unfortunately, when fighting became a mainstream and -- if promoted effectively -- potentially quite profitable undertaking, power over the sport shifted from fighters to promoters. The goal of glove design shifted from preventing career-ending injuries to preventing the gory facial cuts that make fight sport distasteful to the general public. This change in emphasis, combined with the advent of bigger and stronger fighters, spurred the pathologic evolution of the modern glove.

Horsehair was the original glove padding material and, because it is cheap and plentiful, is still widely used. Beyond economics there is very little to recommend it as a padding material. Over repetitive use horsehair has a tendency to redistribute away from the prominences of the knuckles, leaving them unprotected. Also, horse hair compresses: A Canadian study on boxing gloves showed that after only 11 punches force absorption was reduced 50 percent. Lastly, hair absorbs sweat during a fight, adding to the fist/glove mass.

The price of unnecessarily heavy gloves in martial arts is paid in the coin of bodily injury. It has been argued that heavier gloves slow a fighter’s punch, but a (albeit limited) study by PK Smith showed no significant difference in fist velocities for bare hands, karate gloves, “thumbless” gloves and boxing gloves. It appears there is a plateau to human striking speed that relatively small variances in weight do not significantly affect. What did vary in the study was the momentum imparted to the target: 25 percent higher in boxing gloves than bare fists. In fighting that means 25 percent more force imparted to a fighter’s body and brain.

The second unforeseen complication of some forms of fighting gloves lies in the isolation of the thumb. When the bare hand is closed into a fist, the distal phalanx of the thumb naturally flexes at 90 degrees to lie across the second phalanges of the second and third finger: When a punch is thrown, the thumb is tucked away, neither enduring nor causing injury. With modern gloves that cover the thumb, the padding designed to protect the thumb actually leaves it exposed. A misthrown punch, where the power of the blow is borne by the thumb as opposed to the broad striking surface of the clenched fist, puts 3500 N of force -- equivalent to the weight of Carwin, Lesnar and Velasquez combined -- on a thumb ligament the breadth and thickness of linguini. If the projecting thumb strikes an opponent’s eye, that tremendous focused force can blind a fighter.

The tragedy is that it need not be this way. Science, medicine and reason should trump fighting’s hallowed traditions. An ideal glove -- one that protects the fighter’s hand, thumb, brain, eyes -- can be designed. Padding should be composed of closed-aircell foam, which has the desirable properties of being non-compressible, non-redistributive and very light. The thumb should be unpadded and left unencumbered to fold safely into the protected anatomic position. There should be no unnecessary padding around the second and third phalanges, back of the hand and wrist -- this adds mass without improving safety. Weight should be minimized.

Sherdog readers know that a model for the optimum glove design is already available: The ideal glove, the safest one for fighters in any of the myriad martial arts, looks uncannily like the modern MMA glove.

Matt Pitt is a physician with degrees in biophysics and medicine. He is board-certified in emergency medicine and has post-graduate training in head injuries and multi-system trauma. To ask a question that could be answered in a future article, e-mail him at [email protected]