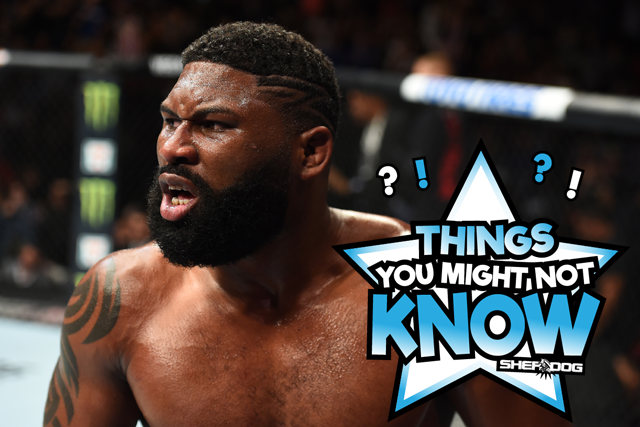 Curtis Blaydes will face the man who handed him his only pro loss. (Photo: Josh Hedges/Getty Images)


Curtis Blaydes 10-1 (1 N/C) is a heavyweight fighter who plies his trade in the Ultimate Fighting Championship. In his next appearance, Blaydes will headline UFC Fight Night 141, opposite Francis Ngannou at the Cadillac Arena, in Beijing, China, on Nov. 24.

As we approach the big day, here are five things that you might not know about the Elevation Fight Team member they call “Razor.”

When Blaydes emerges victorious in the cage, more often than not he has dispatched his opponent via TKO. Of his 10 wins to date, eight (80 percent) have been by this method. The remaining two (20 percent) have come via decision. “Razor” commenced his career with five TKO triumphs on the trot.

He was a talented collegiate wrestler.

Blaydes’ introduction to combat sports came through wrestling. He started out on the mat while studying in high school at De La Salle Institute in Chicago. During his senior year at the school, Blaydes won a state title and went unbeaten, winning 44 matches in succession. The 121 takedowns he achieved in competition during his four years remains to this day a school record. His performances on the mat earned him a scholarship to Northern Illinois University, where he compiled a 19-2 record as a freshman before transferring to Harper College. There, as a redshirt sophomore he won a coveted NJCAA National Championship. Throughout his decorated wrestling career, Blaydes lent on his strong takedown game; a skillset that he has used to devasting effect in his MMA career.

He has failed a drugs test.

Blaydes would hold a 6-1 record with the UFC were it not for the fact that he had his Feb. 2017 TKO of Adam Milstead at UFC Fight Night 104 overturned to a no-contest. This was due to Blaydes testing positive for marijuana. The United States Anti-Doping Agency (USADA) were lenient. They opted against punishing Razor because it was a first-time offence and the amount in his system was under 150 ng/ml, the limit at which sanctions are imposed. However, the win was struck from his record.

He has only lost once.

Across 12 professional bouts, Blaydes has only been beaten once. That defeat came in his first UFC appearance, an April 2016 loss to Ngannou at UFC Fight Night 86. The clash was stopped by the doctor at the end of the second round due to damage to Blaydes’ right eye. On Nov. 24, he will have the opportunity to avenge the only defeat on his record.

He loves video games and reading.

When he is not honing his skills in the gym, Blaydes can more often than not be found relaxing at home. There, he spends quality time with his long-term girlfriend, as well as indulging in some of his favorite hobbies. Razor is an avid gamer who whiles away countless hours in front of the screen. His love of gaming might go some way to explaining his displeasure at being omitted from the EA Sports UFC 3 video game, which was released in Feb of this year. Blaydes stated of his exclusion in an interview, “That feels like a big bummer. How am I not in that game?” In addition to gaming, Blaydes enjoys watching films and reading books. His preferred genres are sci-fi and fantasy.