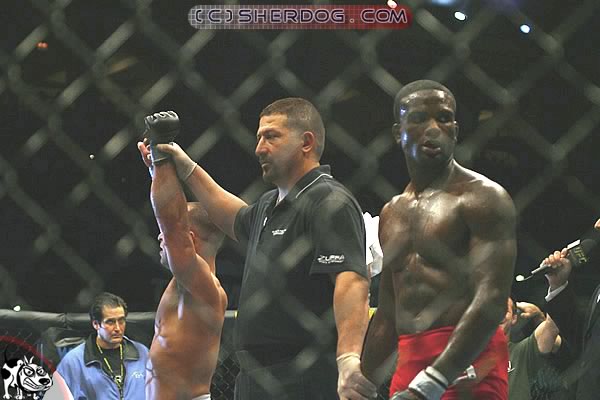 
I initially decided to check out Matt Serra vs. Din Thomas, an unaired prelim which took place at UFC 41 on Feb. 28, 2003, because it was the first fight in Ultimate Fighting Championship history—and possibly the first MMA fight, period—in which the original announcement of the winner was overturned by a commission. Originally called as a victory for Serra, it was discovered later that night that Thomas had won on the scorecards. (Think Giga Chikadze versus Brandon Davis first being called a split draw and then amended to a split decision for Chikadze at the UFC event in Copenhagen last September.) However, as I watched the fight, I realized this only scratched the surface of its unique qualities.

Though they are known today as excellent coaches, at the time Serra and Thomas were highly talented Top 10 lightweights. The UFC had created a four-man tournament for the lightweight title vacated by Jens Pulver the year before, and both Serra and Thomas had lost in the semifinals. Serra had a close, competitive fight with B.J. Penn, 28-29 across the board. Thomas had similarly held his own against largely forgotten early lightweight great Caol Uno—who had choked him out in their first meeting three years before—with all three judges seeing it 29-27 thanks to a point taken away for an illegal upkick. Incidentally, the final between Uno and Penn took place on the very same UFC 41 card, and ended in an anticlimactic five-round draw which left the title vacant.

Watching Serra-Thomas, I was impressed at how skilled both guys were for that era. While Serra had yet to fully develop his standup skills, he was already throwing solid, technical strikes, including the left hook, a punch many current UFC fighters struggle to execute properly. This was in addition to Serra being one of the best submission grapplers in the world and a fine wrestler.

Thomas, for his part, had even more evolved striking, throwing crisp, beautiful combinations that would draw praise in a battle between serious lightweight contenders in 2020, never mind back then. His grappling game was solid, but not up to Serra's level. He did, however, have good takedown defense.

The fight was an interesting tactical affair, if not especially crowd-pleasing. Serra realized that Thomas had a striking advantage and was constantly looking for an opportunity to take him down. Thomas wanted to avoid this at all costs and was thus hesitant about letting his hands go, believing it would give Serra an opportunity for a successful shot or body lock.

Thus, the fight reached a stalemate of sorts. Both fighters were waiting for the other to give them an opening, while being cautious themselves. Serra attempted takedown after takedown and was repeatedly stuffed, but there was little offense from Thomas to punish him for it due to a combination of Serra's decent defense and Thomas not wanting to overextend.

Luckily, any deficiency in fight excitement was made up for with some of the funniest commentary I have ever heard. Mike Goldberg was doing play-by-play commentary and as a special treat, Ken Shamrock was doing color! We often think of “Goldie” as the forgetful uncle of MMA commentary, sometimes completely forgetting the details of fights he himself had called, but compared to Shamrock, he was a regular encyclopedia of MMA knowledge.

Despite Goldberg continually calling Serra by his correct name and pronouncing it properly, Shamrock was insistent that his name was actually “Sierra.” Each time this happened, Goldberg would almost immediately say the New Yorker’s full name in the hopes that Shamrock would pick up on it. Luckily for the home viewer, he didn't, stubbornly sticking with “Sierra.” He kept calling him this dozens of times until late in Round 2, when Goldberg went to extraordinary lengths to emphasize that it was SER-ra—and possibly passed Shamrock a note.

With tremendous effort, Shamrock finally got out a few utterances of “Se-rra?” Not to worry, gentle viewer, as Ken regressed and began alternating “Serra” with “Sierra,” even throwing in a couple instances of “Sierra-Serra.” Only in Round 3 did Shamrock finally learn and correctly pronounce Serra’s horribly difficult surname. I would propose a drinking game where one takes a shot every time Ken says “Sierra,” but don't want to be liable for any fatalities. Alas, Shamrock would never do color commentary for the UFC again—I wonder why—and many potential classic moments of humor were lost to posterity.

With regard to scoring, Round 1 was close, although I slightly favor Serra, as his strikes in the clinch were a little more significant and effective than Thomas' strikes at distance. There was no such ambiguity in Rounds 2 and 3, however. Thomas generated a modest number of connects and damage with his punches, but it was something. Meanwhile, Serra had virtually no effective offense in either round, except for a meaningless takedown on an outside trip, his first successful takedown of the fight, with a few seconds remaining in the final round.

I scored the fight 29-28 Thomas, with 30-27 Thomas being the only other reasonable score. Goldberg and Shamrock were both largely convinced that Thomas had won comfortably, as well. However, after a noticeably long delay in tabulating the scores, the result was announced as a split decision win for Serra. The crowd booed, Thomas looked understandably shocked, and while Serra was relieved to hear his name called, he frankly looked surprised as well.

Sure enough, there had been a mistake, as one of the judges, Nelson “Doc” Hamilton, immediately got up and walked over to the commission table. His 10-9 score in favor of Thomas in Round 3 had been transposed to indicate Serra winning the round. Thus, what had appeared to be Hamilton’s 29-28 scorecard for Serra was in fact a 29-28 scorecard for Thomas, who was the actual winner of the split decision. (No transcription error can explain judge Steven Wright’s 30-28 card in favor of Serra.) The mistake was announced over the house PA during the intermission before the main card.

Serra would be invited back to the UFC in his very next fight, at UFC 46. Meanwhile, Thomas was out of the organization after this victory and wouldn't be back again until nearly four years later, when he appeared on “The Ultimate Fighter Season 4: The Comeback,” which was won by a certain Matt Serra.

Thomas vs. Serra is a curious, interesting fight that deserves to be more widely watched, not only for the high skill level of the match itself, but the bizarre, unique commentary and the historical strangeness of the result.
Next Forgotten Fights of Yesteryear: Chuck Liddell vs. Guy Mezger »