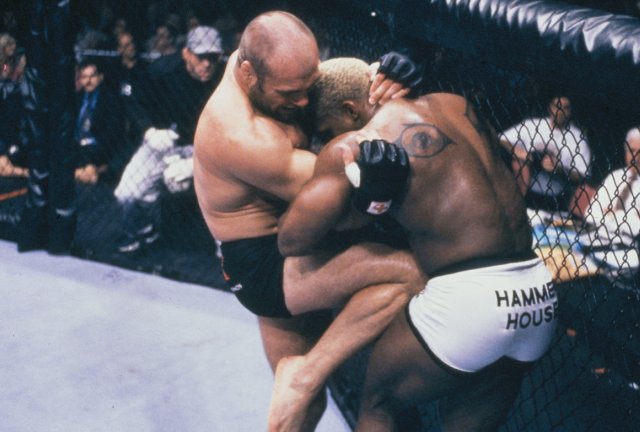 
Hard as it may be to believe, there is a heavyweight title bout that headlined an Ultimate Fighting Championship pay-per-view, yet is rarely talked about today. And it wasn't just any fight for the gold, but a match between two champions and legends that served as a major point for both men’s careers. Moreover, the match itself was spectacular and shocking. I'm talking about the showdown at UFC 28 between Randy Couture, who had left the UFC as champion without being defeated, and Kevin Randleman, who had assumed the crown in his absence. To give it modern context, the marketing for UFC 260’s Stipe Miocic – Francis Ngannou rematch frequently called it the most important fight in UFC heavyweight history. While that was silly hyperbole, I will argue that Couture vs. Randleman exceeded it in that regard. Before diving into the clash itself, let's examine its background in November 2000.


Coming into the match, Randleman was a heavy betting favorite. While officially 3-1 in the UFC, it really should have been 4-0, as he had soundly beaten Bas Rutten only to be robbed, to the relief of a UFC desperate to make the Dutchman its big star. Randleman’s record is more impressive than it looks, since three of those fights were in world title matches and the fourth, his debut in the company, was a win over recent heavyweight champion Maurice Smith.

To be fair, even as champion, the promise of Kevin Randleman's superlative athleticism, physical strength, and wrestling always surpassed his actual performances. The guy who would almost jump out of the Octagon before the fight would start and who seemed to have the perfect body for fighting had recorded four fairly dull decision victories in the organization, often simply maintaining top position and doing little else.

a GIF of KevinRandleman jumping

Nevertheless, one should credit Randleman for beating many tough foes. Randleman at the time was seen as an improvement over his close friend, mentor, and coach Mark Coleman. After all, Randleman had beaten Maurice Smith and Pete Williams where Coleman had lost. In these encounters, not only did Randleman display the same elite wrestling of the first UFC heavyweight champion, but showed much better cardio despite his massive, muscular physique, solid submission defense, and a developing stand-up game. In fact, in his last title defense against celebrated Brazilian striker Pedro Rizzo at UFC 26, Randleman had few takedowns but won the striking exchanges. Rizzo claims he was badly concussed from an accidental head-butt by Randleman and doesn't recall the bout after that, affecting his performance. However, I'm skeptical of this claim, since something very similar happened to Rizzo in an earlier fight against Randleman's coach Coleman, where the American wrestler was having significant striking success and rightly deserved a decision which instead went to Rizzo, which I've covered before.

Randleman wasn't seen as unbeatable, but he hadn't truly lost since two early fights in Brazil Open 1997. Moreover, one loss, to Carlos Barreto, was sustained in Randleman's third fight in a single night and the second, to Tom Erikson, in his second of the night. At any rate, it was unclear how Couture would defeat Randleman. He was the inferior, less athletic, weaker wrestler, and while Randleman was in his prime at 29, Couture was 37. No one back then dreamed how much longer The Natural's career would go.

As for Couture, there were significant question marks surrounding him. His only major victories in the UFC were against Smith and Belfort, both strikers, so he had yet to face another wrestler. Moreover, he had lost twice in Rings after leaving the UFC as champion. While one of those, against Mikhail Ilyukhin, was unjust, the armbar loss to Enson Inoue was absolutely legitimate. While Rings didn't allow strikes to the head of a downed opponent, eliminating Couture's best weapon, it was also the first time he had faced real grapplers in MMA, and the results were not encouraging. There were many who dismissed Couture at that time as an aging wrestler who had come along at the perfect time, facing just the right opponents, and would be exposed by the younger, better wrestler in Randleman. Moreover, Randleman was considered to be the better striker, and while that might sound crazy nowadays, it was very much borne out by the events of the fight.

However, this would not be the first nor last time that “The Natural” would prove his doubters wrong.


Couture, in what would become a signature of his legendary career, came into the fight with a brilliant strategy that he implemented beautifully, maximizing his own skills and seeking to expose the flaws of his younger, stronger, faster opponent. In Round 1, the plan was simple: survive.

Early on, the plan looked to be in jeopardy. Not 15 seconds into the fight, Couture waded forward and Randleman countered with a dynamic short left hook that left the older man wobbling. From there, Randleman clinched and easily slammed Couture to the canvas. As color commentator Jeff Blatnick noted, he had never seen Couture on his back. In fact, neither had anyone outside Team Quest. The prevailing wisdom at the time was that wrestlers were helpless there, and there was no shortage of examples.

Not Couture. He controlled Randleman's posture well from the bottom, limiting Randleman to a can-opener and unlikely attempt at a keylock as opposed to powerful strikes. Moreover, when Randleman postured up, looking to ground-and-pound, Couture threw up an armbar attempt. While he wouldn't be confused for a Mundials champion, the attempt occupied the attention of Randleman, who was forced to slam his way out of it, dropping Couture on his head, showing his monstrous strength. This, however, would begin to sap the younger man's energy. Randleman then landed some hard punches to the body and a few vicious hammerfists, as commentators Blatnick and UFC matchmaker John Peretti discussed how Randleman “can take Randy down at any time.” Clearly, they were giving him little chance at this point. The first round ended with Randleman landing the occasional strike from the top and the bout looking awfully similar to his previous ones in the UFC. Would he win another ho-hum decision?

Round 2 began in a similar manner to the first, with Randleman landing a neat, hard left hook and following it up with an overhand right, hurting Couture. Randleman's striking may have been limited, but he had a mean left hook, the very same one that would later turn Mirko Filipovic's lights out. Randleman again clinched, but this time, Couture got the 50/50 underhook position, keeping the fight standing. Rather than disengaging, Randleman gave in to his wrestler instincts and continued clinching, where Couture landed several knees to his body, further reducing his opponent’s energy tank. Randleman eventually disengaged and was immediately rewarded, landing a nice combination against the challenger: a series of left hooks and overhand rights. At this point, Randleman had displayed a massive advantage in both the grappling and striking. Randy wisely went back to the 50/50 clinch, the only position in which he had been competitive. Randleman eventually dropped down for a double-leg, but only got Couture down to his butt, not his back, while his own head was down at Couture's hips against the fence. Yet again, Randleman showed his insane strength, getting Couture fully on his back. As Randleman worked from the top, Peretti offered the opinion that Couture would fatigue quicker than Randleman. Round 2 was another stanza for the champion, who ended it landing more body punches from the top.

Now, however, is when Couture's strategy would start to bear fruit. As his teammate Dan Henderson continually told him in the corner, Randleman was tired. As tremendous as Randleman's agility and athleticism was, it had largely dissipated after two rounds. Moreover, he had fought at a faster pace and received more blows to the body than he had against either Rizzo or Williams. Couture was feeling fatigue himself, but knew he had to push through and seize the opportunity.

Randleman was much slower to start the third round, and his left hook had become limp and ineffective, failing to bother his opponent. Couture clinched with him and landed repeated hard knees to Randleman's body, making the champion visibly uncomfortable. Seeking to change his fortunes, Randleman tried for a double-leg, but it was easily defended.

Then, two minutes into the round, Couture did the unthinkable; he got a takedown against Randleman. He did so with a gorgeous inside foot sweep. Unlike Couture, however, Randleman was a sitting duck on his back. He frequently placed the back of his head flat against the canvas, a big no-no, with his hips equally flat. Couture went to work with hard, active, straight punches to the head, made worse by Randleman's head having nowhere to go. Couture then placed Randleman's head against the cage, a devastating tactic before martial artists learned to wall-walk, and unleashed a barrage of blows, opening up the champion's face like a geyser. He advanced to mount with Randleman desperately holding on, continuing to punish him with fists. With Randleman absorbing punishment, his face a mask of blood, and no clue how to get out, referee John McCarthy had no choice but to stop the fight.

What a thrilling, unexpected win, especially as it was happening live!


The Randleman fight, every bit as much as his first encounter against Chuck Liddell, his victory over Tito Ortiz or shocking upset of Tim Sylvia at 43 years old, is why Couture is such a beloved, celebrated champion. Through a combination of endless heart, toughness and intelligence, he was able to continually achieve the impossible, never being overwhelmed by how much younger, bigger, stronger or faster the man in front of him was. As we all know, Couture would go on to many, many more years as champion, both at heavyweight and light heavyweight.

As for Randleman, while only 29, that was the last time he would compete for a world championship. While he would show flashes of his incredible ability from time to time, like the aforementioned knockout of Filipovic or spiking Fedor Emelianenko on his head, he never managed to sustain success against other elite fighters. Sadly, he also didn't evolve or improve after the Couture loss. He would sometimes fade late in bouts due to cardio as he had in the Couture fight, but at other times his heart and mind didn't truly seem to be in it. For instance, against Emelianenko, when that breathtaking slam failed, he became discouraged, and only a short while later tapped to a kimura. This is why, despite being a former heavyweight champion and UFC hall-of-famer with a number of high-level wins, many people, myself included, still view Randleman's career as a disappointment. He was that talented. With a different attitude or approach to fighting, he might be remembered as the greatest ever.

To come back to Miocic vs. Ngannou 2, that fight, while certainly important, only significantly affects how we view the new champion Ngannou. Miocic losing at 38 to such a fearsome challenger doesn't change his status as one of the best heavyweights ever. Randleman vs. Couture, by contrast, was a huge point for both hall-of-famers and would come to symbolize both their careers. Moreover, it made for a largely forgotten gem I urge every fan of the sport to watch.

« Previous Forgotten Fights of Yesteryear: One of the Greatest UFC Matches Ever