The IFL veteran exited the scales at a robust 278.5 pounds, while his opponent, Phil Friedman, registered a weight of 259.5. After much discussion with his handler, K-1 mainstay Ray Sefo, Friedman withdrew his name from Saturday’s fight card, which takes place at the Ohio Expo Center.


MMA Epidemic Spreads
By Jake Rossen ([email protected]) Friday, 5:01 p.m. ET: The sourpuss anti-MMA state of New York is slated to look even more Jurassic in attitude. Both Alabama and South Carolina are taking steps to sanction full-contact fighting in the coming months.

South Carolina currently has a ban on mixed-style events, but a proposal to have the state athletic commission regulate the sport went unopposed this week; Alabama just voted to create a state boxing commission that could conceivably oversee other forms of combat.

Naturally, any refreshing practical thinking must be met with Scrabble-vomit opposition like this gem from Post and Courier miser Gene Sapakoff, whose exhaustively researched editorial proclaims that “we are still not sure if MMA events are real or fixed” and characterizes the sport as “bar fights repackaged as entertainment.” He declares horse racing the “sport of kings” and fighting “the sport of goofballs.”

Charming, no? If you’re going to make the case MMA is a brutality contest, it might’ve been wise not to inject horse racing into the topic. Last time I checked, a fighter doesn’t get a lethal injection when he breaks a leg.

I’d be curious to see how many events Sapakoff has actually witnessed and how much of his opinion was formed by 20-second YouTube clips of 15-year-olds wrestling in their backyard.

I seriously doubt the answer would surprise me.

“Ain’t no bitin!’” Watching the handheld camera footage of Kevin "Kimbo Slice" Ferguson and company as they make their way to an undisclosed East Coast location for possibly the world’s first and only Internet-bred grudge match may not sound compelling. And it isn’t.

But it is a curious historical footnote of a time when bare-knuckle fighting enjoyed an abrupt, fleeting resurrection at the callused hands of Mr. Slice, who cultivated such attention that he was subsequently signed by EliteXC and crafted into a primetime network television star.

Watching him arrive on scene in a gym for a closed-door bout with Boston cop Sean Gannon is like getting B-roll of a Charles Bronson movie. It’s raw, kind of ominous and more than a little lurid. Kimbo, for all his limited ability as a pugilist, is a hypnotic personality -- even when he’s ogling women on the street.

Audio commentary is a foregone conclusion on most DVD releases these days, even though directors/producers/actors discussing the mis en scene of “Van Wilder” doesn’t really appear to validate its own existence.

The feature is absent on the majority of MMA products, which is a shame. It would be interesting to get a fighter to narrate a post-mortem on his performance, as Mark Coleman proves here by revisiting his first trip into the Octagon at UFC 10. Two minutes in and we learn from a candid “Hammer” that the UFC’s tale of the tape graphic exaggerated his height and weight, that he was concerned about opponent Moti Horenstein’s “Van Damme-style kicks” and that he dismisses his monstrous physique as “all swelled up” as a result of a bad diet.

Coleman only adds a voiceover to his own tournament bouts. It would be nice to have John McCarthy or event organizers cover the other portions. There’s a lot of history here. It deserves more attention than it gets.


Hackleman vs. White, Round XVII
By Jake Rossen ([email protected]) Friday, 2:01 p.m. ET: Sherdog’s Mike Harris has penned another chapter in the ongoing saga of Chuck Liddell’s future. And once again, Liddell’s business associates/friends appear to be regulating him to the role of broken-home child.

Asserting custody on one side is Liddell’s trainer, John Hackleman, who maintains that Liddell will decide what he wants to do over the summer; standing in opposition is UFC President Dana White, who refuses to consider a future for Liddell in the ring.

“This is a guy who I love and care about extremely,” White said. “He comes to my house for Christmas. We go on vacations together. We’ve been together for years. Getting knocked out consecutively is not good for your health. You can ask any doctor that. You don’t have to be a [expletive] rocket scientist to figure that one out.”

Digression: are rocket scientists really all that smart? I once knew one who miscalculated the helium in a cryostat by .02 ng/ml, putting the pressure in the de Laval nozzle off by two centimeters. What a dummy.

For better or worse, both men appear to be right; even White himself admits that “I’m not his [expletive] father.” It’s completely at White’s discretion to allow Liddell to fight in his organization or not. Liddell is free to pursue other opportunities, though I’d be shocked if some non-compete contract language couldn’t keep him on a string for the foreseeable future.

Hackleman’s compromise makes the most sense: “To be honest, even if Chuck wasn’t fighting the top of the top, he’d still be a big draw and boxers end their careers that way and there’s no reason MMA fighters can’t.”

Unfortunately, the UFC only wants possible title contenders. There’s little interest for one-off fights that don’t have any relevance to a belt. A shame.


Randleman-Whitehead Added to June 6 Strikeforce
By Jake Rossen ([email protected]) Friday, 1:44 p.m. ET: Strikeforce has announced a light heavyweight bout for its June 6 program in St. Louis, Missouri, and it stands an excellent chance of either (a) being contested on the mat or (b) becoming one seriously mediocre kickboxing match. Two-time NCAA national champion Kevin Randleman returns after a prolonged absence to tackle Mike Whitehead, a three-time All-American.

The odds do not favor Randleman. After being bumped out of “The Ultimate Fighter 2” house by Rashad Evans in 2006, Whitehead’s only blemishes since have been against Renato "Babalu" Sobral and Keith Jardine.


A Preview of Things to Come: Akiyama Part I
By Tony Loiseleur ([email protected]) 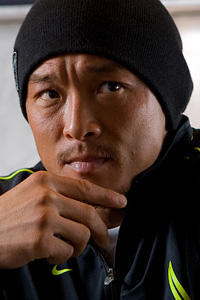 Daniel Herbertson/Sherdog.com
Akiyama thinks the UFC
can be strong in Japan.
Friday, 5:00 a.m. ET: With Yoshihiro Akiyama’s Octagon debut against Alan Belcher at July 11’s UFC 100 still some ways away, Sherdog.com took the opportunity to catch Akiyama for an interview before things got too busy for the stylish international jet-setter. We talked about all things UFC, Belcher, and of course, the “Sexyama” phenomenon currently sweeping the MMA “interWebs.”

The full feature with the aforementioned content is forthcoming, so be sure to prepare your tangerine scarves and banana milk supplies before it debuts. Until then however, here’s a few bits that didn’t make the final cut:

SD: The UFC has very little TV presence in Japan, yet is doing very well on Korean TV. While Dana White has expressed great interest in "invading" Japan with the UFC, the politics of the fight scene and MMA's lack of popularity in Japan make it difficult if not impossible for a foreign company to break into the Japanese fight business. Thus, the UFC may never come to Japan. What are your thoughts on that?

Akiyama: Right now in Japan, the MMA bubble has already burst. We have to revive it, bring it back. I think that if I do well in the UFC, it might help make MMA a little more popular in Japan. I don’t know what the UFC is thinking in regard to the Japanese MMA market, but I do think that if they do come over, the Japanese people will accept them.

It’s still a business, so I think they will try to plan out a way to come over to Japan, but I personally would like them to just come right on over without thinking too much about it.

SD: Lately, fighters from Japan haven't been doing well in Western cages--the UFC and WEC, combined--leading some fans to vocally question if Japanese or Asian fighters really are that strong. The only Asian fighter finding success in the cage now is someone you're familiar with, Yushin Okami. What are your thoughts on Asian fighters' recent performances in the UFC, and do you have a desire to shatter that stigma that is now developing?

Akiyama: I am aware that a lot of Asian fighters aren’t doing well, and I’m thinking seriously about it. Because of that, I think it’s worth fighting because I want to fight on a big stage and overcome that image.

In the world of MMA, I must admit that foreign fighters are often physically stronger, and while there’s nothing that we can really do about that, I think that in response, we have strong spirit, or ‘guts.’ I don’t want to boil it down to just that, but personally, I’m motivated and I have a will to win. Therefore, as a representative of Asia, I have a great desire to put on good performance to overcome the negative stigma.

Bellator will air nationally on ESPN Deportes via one-day tape delay on Saturday, May 9. 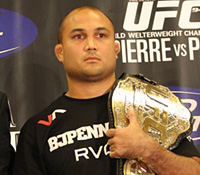 Photo by Sherdog.com
Penn = Ken?
Friday, 3:00 a.m. ET: If nothing else, we know that Penn has a chip on his shoulder roughly the size of China. The guy has not an ounce of back down in him and the talent to back up his perpetual motion mouth. If Penn isn’t reading from the same script as Ken, he must at least have the same agent.

That’s what makes Penn fun to watch, and it’s what makes Ken such a fan favorite. Talent combined with a borderline unhealthy appreciation of your own talent will make you a polarizing figure, and Ken’s perma-smirk and flashy offense took that status to the extreme. Personally, I can’t remember anyone I loved dropping a quarter-fueled beating on more than the blonde-haired pretty boy with the never-ending sneer.

If you want anymore proof that these two are a match, hunt down Penn and tell him that there’s no way he could ever bust out a fireball special in the cage. I’ve got $20 that says he spends the next decade in some Chinese forest and comes out looking to take you up on your challenge.

Check the blog all day for more entries.