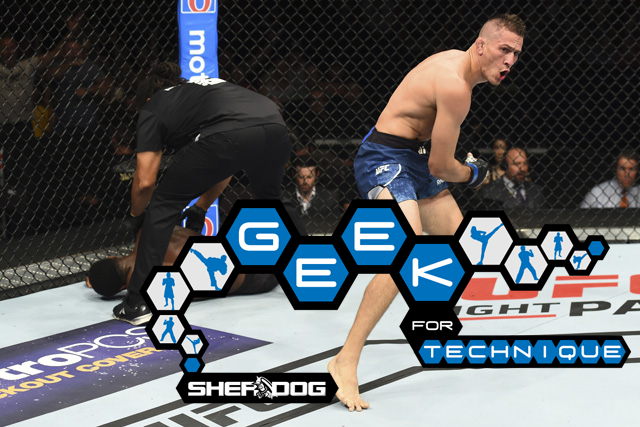 UFC Fight Night 133 on Saturday in Boise, Idaho, was one of the more underrated and overlooked events of the year. It produced some fantastic finishes and set up some interesting matchups for the future. This installment of the Geek for Technique series sheds some light on the best techniques and strategies from UFC Fight Night “Dos Santos vs. Ivanov.”

Not long ago, the Skrap Pack was one of MMA’s most recognizable and successful factions, with Nick Diaz, Nate Diaz, Gilbert Melendez and Jake Shields. While the group does not make as much noise these days, it still produces top talent in mixed martial arts. Take Mark De La Rosa as an example. He spent most of the first round against Elias Garcia on the feet but wasted no time in the second, where he took the fight to the mat early and earned a rear-naked choke finish. De La Rosa, a nine-time North American Grappling Association champion, already has some of the best jiu-jitsu in the flyweight division. In a weight class begging for new contenders, he finds himself on a short list of prospects to watch.

Liz Carmouche took on former 125-pound Invicta Fighting Championships titleholder Jennifer Maia on the undercard. Many expected Maia to have immediate success in the UFC, but Carmouche highlighted the difference in skill between what takes place in the Octagon and what goes on in other organizations. Carmouche took the fight to the ground early and often, as she dominated Maia on the mat for much of the fight. She landed most of her takedowns with trips in the clinch and managed to pass Maia’s guard with ease. She also showed something rarely seen outside of small point karate tournaments: a dropping low kick to the ankle. It allows fighters to avoid kicks since they are considered downed and keeps them far out of punching range.

Raoni Barcelos made his Ultimate Fighting Championship debut against Dana White’s Tuesday Night Contender Series alum Kurt Holobaugh. The former Resurrection Fighting Alliance champion authored one of the best knockouts of the year with a series of right hands. After stunning Holobaugh with a right and left hook, Barcelos landed two uppercuts with a right straight in between to finish the fight. Barcelos got a late start in the sport at 25, but the jiu-jitsu practitioner has developed his striking to become a well-rounded martial artist.

Surging Australian Alexander Volkanovski took on Darren Elkins in a featured prelim. Volkanovski controlled the fight from bell to bell, as he continued to work his way up the featherweight rankings. He excelled on the feet -- he dropped Elkins twice and landed 69 percent of his strikes -- but struggled in the wrestling department, going 0-for-12 on takedown attempts. Despite the grappling woes, Volkanovski was otherwise exceptional; his timing and setups for the right hands were nearly perfect. Although he did not get the finish, he showcased his skills for three rounds and made a name for himself as a contender on the rise in one of UFC’s deepest divisions.

Chad Mendes made his long-awaited return from suspension to face Myles Jury in a featherweight showcase. It did not take long for Mendes to look like his old self, as he finished the fight early in the first round. Mendes dropped Jury with a shuffling right hook and closed the deal with a flurry of ground-and-pound. The shuffling hook is a staple for all Team Alpha Male fighters, and it is a wonder it still works. When fighting any former or current Alpha Male reps, opponents must always be wary of the shuffling hook, yet fighters like Mendes and Josh Emmett continue to finish fights with it.

Nico Price faced off with Randy Brown in a battle of young welterweight contenders, and it produced the most spectacular and unexpected knockout of the year. After a hotly contested first round, Brown decided to take the fight to the ground early in the second and paid dearly for his efforts. As Price went for a leg lock off the roll-under, he used his instep to hold Brown’s head in place and land hammerfists from his back to get the knockout. It is incredibly hard to generate the power needed for a knockout off one’s back, but Price did so and made it look easy.

The co-main event saw Zak Ottow take on highly touted prospect Sage Northcutt at 170 pounds. Ottow nearly won the fight with the first punch thrown, but Northcutt recovered quickly and authored the finish in the second round. Ottow’s first punch had Northcutt’s eyes rolling back in his head, but the Texan’s chin held up. Outside of grappling exchanges, Northcutt has not been in much trouble inside the Octagon, but it was only a matter of time before someone exploited his long right straight. Since Northcutt stands side on like a karateka, his straight punches from the rear hand have a further distance to travel than normal and can be countered easily.

Northcutt has been dominated on the ground in the past, so he knew entering the second round that he had to get aggressive with his striking before the takedowns came again. He dropped Ottow with an intercepting jab and finished the fight with standing hammerfists to earn his first knockout victory since his UFC debut. At only 22 years of age, Northcutt still has plenty of time to develop into an elite fighter, provided the promotion resists the urge to throw him to the wolves too early.

The main event saw Junior dos Santos make his return against former World Series of Fighting champion Blagoy Ivanov. Dos Santos controlled the fight for all five rounds and again outlined the difference in competition between the UFC and smaller organizations.

Ivanov had brief moments of success but generally disappointed, as he did not fight like he had in the past. Some thought he matched up perfectly with dos Santos because of his grappling background and aggressiveness. Instead, he played the Brazilian’s game, tried to strike with him at a distance and got picked apart for five rounds.

Dos Santos landed his right hand at will, with or without setting it up. Generally, dos Santos will jab to pull reactions out of his opponents and then feint the jab to land the right hand after he gets a read. Against Ivanov, he managed to land his right hands naked, with no setups or feints.

Even though dos Santos did not need the setups, he still used them. Midway through the fight, “Cigano” feinted a jab up top before landing a jab to the body to set up the overhand right. This is the exact setup to the overhand right he used to defeat Cain Velasquez in their first fight; it has become a staple of his offense. With the heavyweight division in flux, dos Santos figures to be in line for another Top 10 opponent in the coming months and perhaps even a trilogy fight with Stipe Miocic to determine the next No. 1 contender.