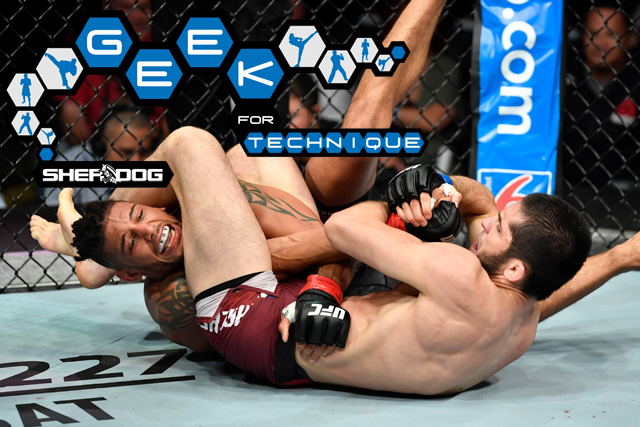 Despite the lowest ratings in the series history, UFC on Fox 30 was one of the most memorable cards of the year, producing highlight-reel finishes and “Fight of the Year” candidates on Saturday in Calgary, Alberta. This installment of the Geek for Technique series examines what went down at the Scotiabank Saddledome.

While successful liver shots are few and far between, UFC on Fox 30 resulted in two of the best such knockouts MMA has seen in some time.

Devin Powell took on Alvaro Herrera at 155 pounds. Herrera looked fantastic early in the first round but ate two successive kicks to the liver that ended the fight. The accuracy on the kicks was startling, as Powell buried his toes into the exact same spot on both occasions. Powell endured a rough start in the UFC and desperately needed a win to keep his spot with the company.

In a battle of rising flyweight contenders, Dustin Ortiz squared off with Matheus Nicolau Pereira. Flyweights are not known for knockout power, but Ortiz has delivered eight of his 19 wins by KO. Early in the first round, Ortiz landed a beautiful head kick that set up the ground-and-pound finish. Even though the kick was almost perfectly blocked, it still had enough power to stun Pereira. Oftentimes, blocked strikes or strikes taken on the forearms and shoulders are not seen as damaging blows. Ortiz showed otherwise.

Katlyn Chookagian duked it out with Alexis Davis in pivotal women’s flyweight clash. Chookagian controlled much of the fight, with her lead hook serving as her main source of success. Whether it was on the lead or on the counter, Chookagian’s lead hook found its home all night, and Davis had no answers. In a still-fledgling division, Chookagian represents a pleasant change of pace.

A showdown between UFC veterans went down at 155 pounds, as John Makdessi took on Ross Pearson. The fight was fairly one-sided, with Makdessi controlling every round. However, Pearson kept coming forward and played his part in the “Fight of the Night.” Makdessi controlled the fight with his lead hand and landed jabs and lead hooks at will. Even so, the historically tough Pearson maintained his pressure despite the damage.

Two light heavyweight hopefuls faced off on the undercard, as Ion Cutelaba met Gadzhimurad Antigulov. Fighting professionally since he was 18, the 24-year-old Cutelaba represents a glimmer of hope in a division desperate for younger stars. After a year layoff, many wondered whether or not Cutelaba would be a step slow, but he answered those doubts with a spectacular finish. Late in the first round, Cutelaba clinched Antigulov against the cage, beat on him with uppercuts and hooks in the pocket and landed two fight-ending elbows.

Islam Makhachev, Khabib Nurmagomedov’s friend and training partner, toed the line against Kajan Johnson at 155 pounds. As expected, Makhachev dominated the fight before getting an armbar late in the first round. Russian fighters have long been seen as the best grapplers in the world, and Makhachev only strengthens the belief. A former combat sambo world champion, he trains under Abdulmanap Nurmagomedov, father of the current lightweight champion. Makhachev now owns a 5-1 record in the UFC.

Hakeem Dawodu took on Austin Arnett in a battle of featherweight prospects. After losing in his March debut, Dawodu looked better than ever against Arnett and controlled the fight from bell to bell. The most impressive part of Dawodu’s performance was his variety of leg kicks. He led with leg kicks, ended combos with leg kicks and even landed a few counter leg kicks as Arnett missed his own. Leg kicks have always been one of the most effective and underappreciated techniques in combat sports, but fighters like Dawodu prove fights can be won with them. His boxing and defense looked sharp as well, but the low kicks were key and allowed him to take home an easy decision.

Alexander Hernandez took on Oliver Aubin-Mercier in a lightweight showcase. Most expected a competitive affair, but Hernandez surprised the MMA world with another dominant win over a UFC veteran. Hernandez did not get to show much in his shocking 42-second upset of Beneil Dariush earlier this year, but against Aubin-Mercier, he was afforded the opportunity to display his skills over the course of a full fight. Many felt Hernandez would have the advantage on the feet but would struggle on the ground. Instead, he controlled the fight on both ends and proved himself as a well-rounded martial artist at just 25 years old.

The action was stagnant on the ground, but Hernandez stifled the grappling-based Aubin-Mercier on the mat for much of the fight despite not getting off many strikes. With wins over two Top-15 fighters, Hernandez has become a legitimate person of interest at 155 pounds.

Former women’s strawweight titleholder Joanna Jedrzejczyk took on Tecia Torres at 115 pounds. The fight was far from a barnburner, but Jedrzejczyk appeared to be back in championship form and launched a few sublime counters. As Torres came in with a kick, “Joanna Champion” trapped the kick with her left hand and landed a counter straight to the body before dropping the leg and landing a lead hook to the head. After the fight, Jedrzejczyk affirmed that she wanted another shot at current strawweight champion Rose Namajunas -- a woman to whom she has already lost twice.

Jose Aldo in the co-main event looked to get back in the win column against Jeremy Stephens, who was on the best run of his 11-year UFC career.

Midway through the first round, Stephens rocked Aldo with a counter right straight and uppercut that put a finish within reach.

However, Aldo weathered the storm and finished the fight with a lead hook to the liver just a minute later. Aldo threw this same combination earlier in the fight and knew Stephens would put his forearms up in a “bull guard” to block his right straight. A few minutes later, Aldo dipped to his left and threw a rear hook expecting Stephens to use the bull guard and expose himself to body shots. Since Aldo was dipped to the left, it allowed him to get more torque on the liver shot to finish the fight.

The headliner saw Dustin Poirier and Eddie Alvarez face off in a rematch from 2017. The fight was just as exciting as their first, and despite some controversy, Poirier took home a TKO win.

Poirier for years has been seen as a sleeper contender at 155 pounds, but after his performance against Alvarez, the time has come to take him more seriously. His calm in-the-pocket boxing ranks as some of the best in the business, and he thrives in fast-paced wars where most athletes struggle.

The most surprising aspect of Poirier’s win is that nobody seems to be talking about his fight IQ. After the rematch was restarted in wake of Alvarez’s illegal 12-to-6 elbow to the shoulder, Poirier new he was at risk for being taken down again and immediately went for the kill. Alvarez had initiated grappling exchanges more than usual, and Poirier may have felt he was at a disadvantage in that area. Poirier has an incredible amount of experience for someone his age and has turned into one of the most well-rounded fighters on the roster.