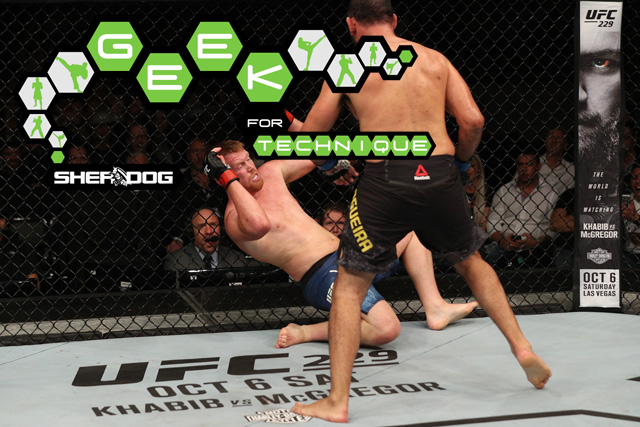 UFC Fight Night 137 in Sao Paulo, Brazil, wasn’t the best card on paper and will inevitably get some of the lowest rating ever, but that doesn’t mean it had to be a boring night of fights.

The Brazilian fans showed up as always, and 10 of the 14 fights were finishes, with three of those coming in the first round. From flying knee knockouts to comeback submission victories and close split decisions, this lineup truly had everything and today we go over the best moves of the night:

The night started off with top strawweight prospect and former Invicta Fighting Championships queen Livia Renata Souza taking on Australian veteran Alex Chambers. Souza looked every bit of the massive -2000 favorite she closed at and quickly took the fight to the ground and locked up a guillotine in under two minutes. For those of you that don’t know Souza, she is one of the best submission specialists in MMA today and should wreak havoc on the UFC’s strawweight division.

Another highly-rated prospect, Elizeu Zaleski dos Santos, took on newcomer Luigi Vendramini, who took the fight on a weeks’ notice. Vendramini did much better than expected in the first round and beautifully defended a deep Peruvian necktie choke and then nearly locked up a rear-naked choke shortly after.

Early in the second frame, Vendramini seemed to break his foot on a low kick and Zaleski took advantage with a spectacular flying knee to set up the finishing blows. Zaleski is now 6-1 in the UFC and certainly deserves a top-15 opponent next to solidify himself as a contender.

Next up was Thales Leites’ final fight, when he took on fellow veteran Hector Lombard. Early in the contest, it seemed Lombard was taking over with these vicious leg kicks that made Leites’ knee look like it grew a second kneecap. But Leites continued to move forward and pressure through the kicks in the later rounds and took home a decision victory in his home country. Few fighters retire at the right time, let alone win, so it was nice to see Leites know when the time was right and end his career on a high note.

Mayra Bueno Silva made her debut against Gillian Robertson. The first round was rather competitive, and it looked like Robertson was going to seal up the round with a late takedown, but it ended up being her undoing. With just 10 seconds left in the frame, Silva locked up a nasty armbar from full guard and nearly snapped Robertson’s arm before the bell. Silva is now a perfect 5-0 in MMA with three submission victories to her name, including a rare ninja choke in her Tuesday Night Contender Series fight earlier this summer.

In the Fight Pass prelims headliner, Sergio Moraes took on Ben Saunders in what was a fantastic grappling matchup. The fight rarely left the ground and saw Saunders spending most of the time on bottom with Moraes intelligently picking his spots to strike, waiting for Saunders to open himself up for a submission. Late in the second round, Moraes got into full mount and locked up an arm triangle before transitioning to side control to finish the choke. Moraes had a late start in MMA and was known as one of the best Brazilian jiu-jitsu artists in the world before he made his UFC debut in 2012. Now he is 8-2-1 in the UFC and deserves a ranked opponent next before he is out of his prime.

The opening bout of the prelims saw Augusto Sakai take on Chase Sherman in what could have been the fight of the night. Sakai controlled much of the contest, but Sherman showed off his ridiculous ability to absorb damage and it took Sakai everything he had to finally finish in the third round. Sakai landed 125 of 233 strikes, well above the heavyweight average, and is now 2-0 in the UFC, including his contender series fight this summer. The heavyweight division has been struggling for new talent for years now and at 27, Sakai has a chance to become one.

The prelims headliner was a historic one that saw Charles Oliveira break the submission victory record with a rear-naked choke of Christos Giagos. Of his 12 UFC wins, 11 are via submission and if he continues this path he will have that record for years to come. Oliveira is surprisingly only 28 with an incredible amount of experience and still has plenty of time to develop his striking to become a legitimate threat.

The opening fight of the main card saw Randa Markos and Marina Rodrigues compete to a surprising draw. On the feet, the duel was as close as possible, with Markos landing 66 of 139 strikes and Rodriguez landing 71 of 153. But it was the takedowns by Markos that many thoughts won her the fight. She landed two of five takedowns at opportune times and had four-guard passes. But the judges saw things differently and scored it a draw, so let's hope they run things back later this year.

Next up was the most shocking fight of the night that saw Andre Ewell completely outclass former champion Renan Barao from bell to bell. We knew Barao was not the fighter he used to be, but nobody expected a drop off like this. To put this loss in perspective, Ewell’s other opponents have a 78-141 combined record, including a 1-37 and 0-19 fighter and some guy named Rick James. But credit to Ewell; his left straight looked on point all night and his relaxed style was surprising for someone making their Octagon debut against a former pound-for-pound ranked fighter.

Brazilian legend Antonio Rogerio Nogueira took on Sam Alvey and put on his best performance in years. After a stagnant first round, Nogueira picked up the pace in the second and earned a classic “Little Nog” knockout with an overhand left behind the ear, giving Alvey just his second knockout loss.

Alex Oliveira and Carlo Pedersoli ended up being one of the quickest knockouts of the year. Many, including myself, thought Pedersoli had a real chance against Oliveria, but Cowboy had other plans and ended the fight in just 39 seconds with a counter right behind the ear off a sidekick that was caught.

The main event seemed to be doomed with multiple injuries and fighter changes, but we ended up getting a fight of the year candidate. Thiago Santos expectedly controlled the fight from beginning to end, but Eryk Anders did a lot for his stock by showing his ability to take punches and keep coming.

Anders took the fight on six days’ notice after fighting less than a month ago, so his cardio and overall conditioning were not where they normally would be and after the third round he collapsed in defeat.