“The Fireball Kid” was headlining World Victory Road’s fourth Sengoku event, which featured a lightweight grand prix that will eventually grant the winner a shot at Gomi. The inherent problem of having the victor fight Gomi, however, is that Gomi could lose before the tournament is finished.

He avoided that pitfall Sunday by nudging out a decision against recently crowned Deep lightweight champion Seung Hwan Bang (Pictures). For the majority of the first round, though, Bang outpunched his superstar opponent, landing well from the outside with straight punches and throwing his combinations aggressively. But toward the end of the round, Gomi planted a seed of doubt with hard low kicks and counterpunches.

That seed carried over to the second. Bang's aggressive punching from the outside all but ceased, and he instead relied on punching while moving backward. Eventually even moving became difficult for the Korean Top Team product, as Gomi delivered hard low kicks that stopped Bang's footwork.

Gomi then easily stuffed a takedown attempt and passed to mount on the ground. Bang escaped without incident, but he was visibly exhausted and only sporadically boxed with his hands by his sides.

The third round provided the Korean with his second wind. His movement seemed to be restored, and he got the better of a toe-to-toe exchange by landing a clean right. To halt his opponent, Gomi again went low with his kicks, which sent Bang backward and caused him to resort to counterpunching. With his opponent retreating, Gomi got more aggressive and opened a small cut above Bang's eye before the final bell.

All three judges saw the fight for Gomi, but Bang had clearly showed that he is one of the hottest up-and-comers in Asia. Gomi looked less than impressive in the bout, and if his opponent had better gas and low kick defense, the decision might have gone against him. 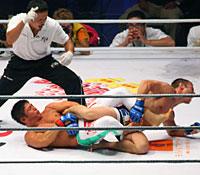 Stephen Martinez/Sherdog.com
Satoru Kitaoka (left) submits Clay
French in the first round at Sengoku.
Satoru Kitaoka (Pictures) earned his second quick submission win in two appearances at Sengoku. After a failed takedown to start off the lightweight grand prix bout, Kitaoka quickly seized Clay French (Pictures)'s leg. The Japanese fighter then slipped on a straight ankle lock for the tap 31 seconds into the first round, ending French’s eight-fight winning streak.

The win cements Kitaoka -- part of the newly formed Nippon Top Team with Japan's best and most creative submission fighters, Shinya Aoki (Pictures) and Masakazu Imanari (Pictures) -- as a favorite in the tournament.

Unable to capitalize on an early takedown, the Brazilian jiu-jitsu world champion resorted to throwing leather, landing with straight rights and a good high kick. A grappler with aspirations to become a striker, Damm got overzealous, however, and Mitsuoka landed a hard overhand right that sent him tumbling to his knees. Mitsuoka then easily took his opponent’s back and sank in a rear-naked choke at 3:13 of the first to advance in the tournament.

The first was going as most experts had predicted. Schultz landed better with body shots and left hooks, and Hirota swung and missed for the knockout while also having difficulty stopping takedowns.

The second round was more of the same until Hirota landed a clean jab that seemed to give him his range. Seconds later the Gutsman Shooto product launched a jumping right hook from the hip that landed cleanly on Schultz's temple. Now fighting a bout with unconsciousness, Schultz ate a series of hammerfists to put him out entirely at 4:25 and move Hirota into the next round of the tournament.

In a tournament bout that was marred by rope grabbing, a low blow and inactivity, former Deep lightweight champ Kazunori Yokota (Pictures) did enough to get the decision against Slovenian prospect Bojan Kosednar.

Kosednar's game plan was thwarted in the first. He failed with both trips and double-leg takedowns and had to hold on from the bottom after getting taken down himself. Over the course of three rounds, Kosednar earned two yellow cards -- one for holding and one for grabbing the ropes -- and Yokota got one himself for a hard low blow.

Yokota's takedowns and right hands were enough to earn the Grabaka judo player a messy unanimous decision. He apologized to fans afterward, citing an injury that prevented proper training and led to his lackluster performance. 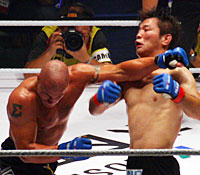 Stephen Martinez/Sherdog.com
Frank Trigg (left) lands a left hand
against Makoto Takimoto at Sengoku.
Frank Trigg (Pictures)'s wrestling was the story of the night against Olympic judo gold medalist Makoto Takimoto (Pictures). Although Takimoto landed some trips throughout the bout, Trigg was dominant from the top after getting single- and double-leg takedowns over the course of three rounds for a unanimous decision.

In the evening's less than stellar undercard, Pawel Nastula (Pictures) failed to make the comeback he was hoping for. In the first round, Yang Dong Yi connected low with an early kick and later a knee from the clinch that earned him a yellow card and a chorus of boos but left Nastula noticeably less mobile. Nastula then moved around the ring flatfooted and had trouble landing with his looping punches or securing a takedown.

In the second, Nastula had an armbar locked in from guard after being taken down. He let it go, though, and allowed his opponent to stand. Nastula didn't rise to follow Yi, instead pointing to his cup and indicating a problem. That was enough for the referee, who inexplicably halted the bout at 2:15 and gave Yang Dong Yi the TKO victory apparently via armbar to the groin.

In other action, Frenchman Moise Rimbon caught K-1 veteran Peter Graham (Pictures) with an overhand and finished him off on the ground with a rear-naked choke 42 seconds into round two. Valentijn Overeem (Pictures) was also victorious, knocking out journeyman Yoshiki Takahashi (Pictures) with a flying knee at 2:42 of the first round.