The first time the late Carlson Gracie Sr. laid eyes on Miguel Torres at his Chicago academy, he asked, “Who’s the little Mexican kid?” Theirs was a union born out of pure coincidence.

“I didn’t even know who he was,” Torres says. “I got invited to his gym, but I didn’t go at first. When I started, I trained for about two or three weeks. Carlson wasn’t even there.”

Though separated by almost half a century in age, teacher and student formed a quick bond, as Torres developed and honed his Tasmanian Devil skills under Gracie’s nurturing wing. He was next in the long line of accomplished Gracie disciples, joining Murilo Bustamante, Mario Sperry, Andre Pederneiras and Ricardo Liborio.

“He was very important in my life,” Torres says. “Carlson built so many great fighters. I always believed I could do something big, and him believing in me had me believing it had to be true.”

Their time together was brief, however, as life threw a monkey wrench into their plans. Less than two years after they met, Gracie died of heart failure in a Chicago hospital at age 72. Met by the unexpected news that his mentor had passed, Torres mourned along with the rest of the martial arts community.

“It still affects me now,” he says. “He was more like a mentor to me than a coach. I was with him the day before he died. Carlson had asked me to make a CD for him. The next day, I came back, and he was gone.”

Torres bears his teacher’s legacy proudly, and everyone associated with mixed martial arts now knows the answer to Gracie’s question. Ranked number one in the world at 135 pounds, the little Mexican kid’s a superstar.

As reigning World Extreme Cagefighting bantamweight champion, Torres will carry confidence and momentum into his title defense against the unbeaten Manny Tapia in the WEC 37 main event on Wednesday at the Hard Rock Hotel and Casino in Las Vegas. A former King of the Cage titleholder, Tapia presents a number of challenges inside the cage. Torres expects a dogfight. 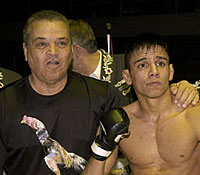 Photo by Thomas M. Rozdzynski
Miguel Torres bears his
teacher's legacy proudly.
“I’ve never really fought a guy like Manny,” Torres says. “He comes out with real heavy hands. I think he’s going to come out fast and look for a flash knockout. A lot of guys say they’re going to come out and bang with me. I think he’s one of the few who will, and that makes this an interesting fight for me.”

Torres’ path to self discovery was paved by years of competitive anonymity and seemingly insurmountable odds, as the 135-pound dynamo earned his stripes fighting for pennies in Indiana barrooms, sometimes against men who outweighed him by 70 pounds.

One night, more than any other, holds special significance for Torres. On Nov. 22, 2003, he made an unfamiliar and uncomfortable walk from the ring to his dressing room, the tears of fans trumpeting his departure from the Hammond Civic Center in Hammond, Ind.

In his first appearance since reconstructive knee surgery, the then 22-year-old Torres dropped a unanimous decision to Ryan Ackerman and knew, for the first time as a professional fighter, how it felt to fail. Torres sold 2,000 tickets to the Ironheart Crown VI show he was set to headline. In all, the crowd swelled to some 4,000, most of them there to see the East Chicago, Ind., native in action.

“I’d just come back from ACL surgery,” Torres says. “I was supposed to fight [Mustafa] Hussaini, but he pulled out, and when they couldn’t find a replacement, I agreed to fight Ackerman at a catchweight.”

He entered the ring as a heavy favorite, a perfect 19-0 record in tow, and threatened to dismiss Ackerman early, first with a guillotine choke and then with a triangle. As they returned to their feet eager to re-engage, Torres realized his 18-month, injury-induced layoff had taken a far greater toll on him than first thought.

“When I stood up, my legs were gone,” Torres says. “He took me down and mounted me. It’s still the only time in my career I’ve been mounted. I finished the fight, but I knew I had lost. Walking out and seeing all my fans crying had the biggest impact on my career. I vowed then that I’d never be outworked again.”

Five years later, Torres (34-1) stands atop the bantamweight world, WEC crown in hand, as he carves out a legacy likely to stand for generations. He has won 15 consecutive bouts -- including a submission victory over Ackerman in their 2005 rematch -- and has finished all but one of his opponents during a streak that spans 262 weeks and four days. Experience taught him to swallow his fears.

“I’m not scared of anybody in my weight class,” Torres says. “I’ve been in there with guys who were stronger than me. Those fights all built my game.”

Since he entered the WEC in 2007, Torres’ popularity has exploded. He claims the number of students who train at his home base -- Torres Martial Arts in Hammond, Ind. -- has nearly doubled. Daily e-mails flood his inbox from all across the globe.

“This past year, my fan base has grown worldwide,” Torres says. “I get e-mails from Japan, Mexico and Europe. Everything changed. I got onto some pound-for-pound lists, but people haven’t seen half of what I can do yet.”

His training sessions are the stuff of legend -- he was doing 1,000 crunches a day as a 7-year-old soccer player -- and does not have to dig deep for motivation. The first of three children born to blue-collar parents, Torres understands the benefit of hard work and remembers what it was like before the bright lights of the WEC shone upon him.

“There’s no way I want to go back,” he says. “I’ve seen guys do well and make it and then have to go back to the smaller shows. I’m going to fight hard to stay where I’m at. It makes me train so much harder.”

Inspiration comes from another source, his young daughter, not yet 2. Fatherhood has only hardened his resolve.

“Every time I train, I think about my daughter,” Torres says. “I want to do all I can to provide for her. When it’s below zero outside at seven in the morning, all I have to do is look over at her.”