ENOCH, Alberta –- Welterweight champion Pat Healy proved that history can repeat itself, as he defeated local star Ryan Ford via split decision in their rematch at MFC 20 “Destined for Greatness” on Friday at the River Cree Casino and Resort. In a close fight, Healy wielded an impressive array of submission attempts and kept the heavy-handed Ford at bay over five rounds.

Ford started off strong, landing a few shots and slams in the first round. The middle three rounds were all very close, but Healy won them with his multiple submission attempts.

Ford managed to come on strong in the fifth round, again landing some shots and even trying his own choke, but it was too little, too late as time ran out on the popular local standout.

"It was a really tough five-round war," said Healy, who moves to 20-13 with the victory. "There was way more grappling than I thought there was going to be. Quite a few times I had him in bad position, but he is just so hard to finish. He really tightened up his game since the last time we fought. Much more well-rounded than before."

Healy, who arrived in Edmonton by bus from Vancouver because of flight issues, was weary about leaving a close fight in the hands of the judges in his opponent’s hometown, but he believed he was the rightful winner.

"The first round was close, it could have gone either way,” he said. “I thought I had rounds two, three, and four based on my grappling and you’d have to give him the fifth. I knew I won the fight, I just had to wait for the judges to confirm it." 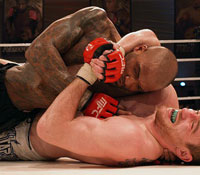 Rob King/Sherdog.com
Pat Healy works a
twister on Ryan Ford.
Healy does not have to look far for his next challenger. Nick Thompson put himself in line for a title shot in the semi-main event of the evening as he defeated British import Paul Daley by unanimous decision.

In what turned out to be the fight of the night, both guys showed well-rounded games mixing up striking and grappling. The fighters exchanged blows on the feet for most of the first two rounds before turning to the ground in the third. It was Thompson’s ground game in the third set that was the deciding factor on the scorecards.

“I really think I frustrated him. He did fairly well; his kicks were really working for him. But he figured out I was too long for him," said the 27-year-old Thompson, now 38-10-1. "I knew it was even going into the third. I had a crappy takedown attempt, but I ended up on top and once I got on top I knew I had the fight."

"I was a little worried that the judges might have given Daley the second round as a 10-8 round, but other than that I was not worried at all," said Thompson.

Former IFL coach and fighter Antonio McKee stepped back into the ring following an 18-month lay-off to claim the vacant MFC lightweight title with a unanimous decision over veteran fighter Derrick Noble by 49-46 tallies all around.

After dropping the first round to Noble thanks in part to a big punch-kick combo that momentarily stunned him, McKee went back to his roots and used his wrestling to control Noble for the remaining four rounds. McKee relied on his striking more then in previous fights, but in the end he returned to what has worked for him time and time again: multiple takedowns followed by ground-and-pound.

"I know I’m American but I think I have found my home here in Canada," said McKee (22-3-2). "I will keep coming back to the MFC looking to keep doing what I do until someone stops me."

Bryan Baker penciled himself into a middleweight title fight at MFC 21 with a knockout victory over “The Ultimate Fighter” alumnus Rory Singer with just 4 seconds left in the first round. After surviving a deep armbar attempt from Singer midway through the first, Baker managed to catch Singer with a single punch to the head just as the round was coming to an end.

David Heath picked himself up a much-needed victory tonight over former MFC light heavyweight champion Roger Hollett. As soon as the fight hit the ground, Heath showed his superiority and managed to catch the former champ in a fight-ending guillotine choke. Heath had lost four of his previous five fights and Hollett has now dropped three of his last four.

Opening the televised portion of the card, “The Ultimate Fighter” graduate Solomon Hutcherson defeated Dave Mewborn via unanimous decision in a spirited affair that left the crowd on their feet as the final bell sounded.