Back-to-back losses are more than enough to motivate many a fighter to step up his or her training for the next throwdown.

Even though his middleweight fight Saturday against Rousimar “Toquinho” Palhares (Pictures) at UFC 88 in Atlanta is his first bout since consecutive defeats at the hands and legs of then-UFC light heavyweight champion Quinton “Rampage” Jackson and current UFC middleweight champion Anderson Silva (Pictures), Henderson said he’s training no harder for this fight than for the last two.

“I try to win every fight and I train hard to win every fight,” Henderson (22-7-0), one of MMA’s most battle-tested, accomplished veterans, said during a break from training at his Team Quest facility in rural Murrieta, Calif., about 80 miles southeast of Los Angeles. “I feel like in those last two fights, I trained harder than ever, so …

“Just for whatever reason, my body wasn’t quite feeling so good in my last fight,” Henderson, a man of relatively few words, said of his March 1 loss to Silva. “And against Quinton Jackson (Pictures), I came up a little short. My weight cut last time, I didn’t quite do it properly, for whatever reason, but I’m right on track right now. Right where I want to be.”

If anything, said Art Santore (Pictures), one of Henderson’s regular sparring partners at Team Quest, Henderson has stepped down his training for the Palhares fight. That’s because, Santore said, he and Henderson’s other training partners feel they overworked Henderson for the Jackson and Silva fights, leaving his body a bit worn down going into those contests. 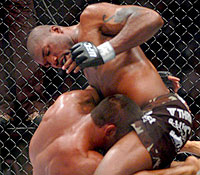 Photo by Sherdog.com
Art Santore, a regular training partner,
thinks Henderson overtrained for his
clash with "Rampage" last September.
“I don’t think he’s overtraining for this one,” Santore said. “When he fought Anderson Silva (Pictures) and Quinton, we were pushing him pretty hard, so I think he kind of fatigued the body out a little too much. So I think on this one, we’ve learned not to over push him too much. I don’t think his body is as beat up as it was for those other two fights.

“He was definitely just worn out,” for the Jackson and Silva contests, Santore continued. “I mean, I was a little nervous for him. The body can only take so much. Whereas this fight, his body is healthy right now. He’s not gonna hit the plateau early.”

The fact that he’s not overtraining this time out should not be interpreted as meaning that Henderson, favored to win, is taking Palhares (8-1-0) lightly.

“He’s not very well known, but he’s very dangerous,” Henderson, 38, the heavy-handed, iron-chinned former Olympic wrestler, said of his opponent, a Brazilian jiu-jitsu submission specialist, 10 years his junior, who is on a six-fight win streak. “He’s gonna be tough and like I said, he’s dangerous for sure on the ground with his submissions. I’m aware of that and I’m sure the fight will end up on the ground and I’m comfortable there. It’s just that’s the only place I feel he can finish the fight, so I just want to be careful when I’m on the ground with him.”

Indeed. Three of Henderson’s seven career losses, including his defeat by Silva, have come by way of submissions. Six of Palhares’ eight wins have been via submissions, including his last fight at UFC 84 in May, where he scored an impressive armbar victory over wily veteran Ivan Salaverry (Pictures).

“This guy tapped out Ivan Salaverry (Pictures), and he made it look easy,” Santore said with begrudging respect.

Obviously then, Palhares is certain to try to take the fight to the ground early. Henderson, who has 10 career knockout victories, is equally certain to want to keep the fight standing up.

Krzysztof Soszynski (Pictures), another Henderson training partner (Henderson made it clear that he doesn’t have “trainers,” but rather “training partners”), said it’s no secret where Henderson wants the fight.

“We definitely think Dan Henderson (Pictures) is a way better fighter than his opponent on the feet and in the clinch,” Soszynski explained. 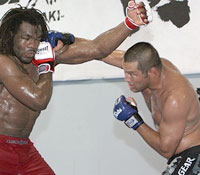 Soszynski added that Henderson also has been working with “some really good jiu-jitsu guys to help him with his ground game and who know their leg locks. We know that his opponent is a really good submission artist, especially with the leg locks. I think Dan is 100-percent ready to go.”

Soszynski agreed with Henderson that his consecutive losses to Jackson and Silva aren’t really a mental factor as he prepares for Palhares.

“He’s such a mentally strong fighter that having two losses doesn’t really affect him that much,” Soszynski said.

But Santore isn’t so sure.

“He knows that if he doesn’t win this fight, where then are they (UFC) going to put him?” Santore said.

Since coming over to the UFC in 2007 from Pride, where he simultaneously held the welterweight and middleweight belts, Henderson has yet to win in the Octagon, though certainly there’s no shame in losing to the likes of Jackson and Silva. Henderson’s last UFC wins were way back in 1998 at UFC 17, when he won the middleweight tournament.

“I’m sure he’s just like every other human,” Santore said. “I mean I always told myself that if I came out with three losses in a row, that I better pretty much fold it up because I can’t seem to get something right. Now as for Dan, I’ve never questioned him about that, but I’m sure he’s got to be feeling it just as any other fighter knows. You can’t expect to keep getting paid to continue fighting if you’re not winning.

“But being that I’m one of his trainers, I always think he’s going to beat everybody. There’s never a doubt in my mind that he’s going to be able to knock these guys out. I mean, I still think that he can beat Quinton Jackson (Pictures) and Anderson Silva (Pictures).”

And then of course there’s the fact that the only other time Henderson dropped two straight fights, back in 2002, with losses to Ricardo Arona (Pictures) and Antonio Rodrigo Nogueira (Pictures), he responded with four straight wins.

Will past be prologue? Will Henderson start a new win streak by disposing of Palhares? Or will he lose a third consecutive fight, giving Palhares a seventh straight win? All those questions, as UFC President Dana White is fond of saying, should be answered Saturday.