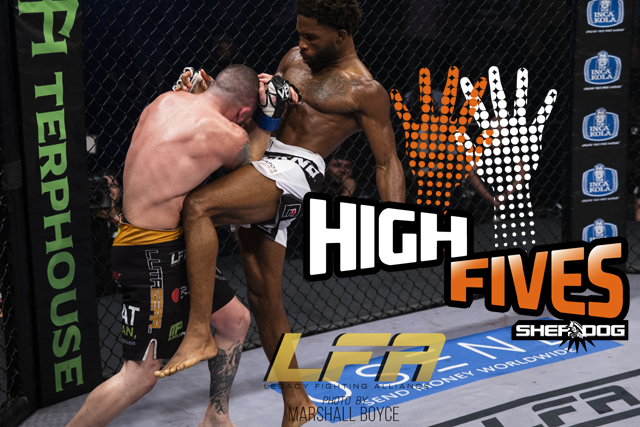 UFC 228 was not the only mixed martial arts events of significance during the weekend of Sept. 7-9. One Championship “Beyond the Horizon” was home to a title fight and other pivotal matches on Saturday in Shanghai, China, while Legacy Fighting Alliance 48 featured some impressive finishes on Friday in Kearney, Nebraska.

PANDA PREVAILS … The One Championship main event saw women’s strawweight champion Jingnan Xiong defend her title against Brazilian challenger Samara Santos Cunha. In the first round, Cunha took her standing opponent’s back against the ropes, but Xiong managed to break free. Later in the round, the champion, having scored a jumping knee knockdown, pounced on her prone adversary and delivered punches and elbows from a high mount position. Somehow, Cunha survived. After a second round, Xiong ended the match with a right cross 1:22 into the third. It marked the first time that “The Panda” had defended her title on home soil. She next expects to meet women’s atomweight titleholder Angela Lee in a champion-versus-champion superfight. In defeat, Cunha fell to 11-6-1.

SUBMISSION SUCCESS … The One Championship show was co-headlined by a lightweight clash between Singapore’s Amir Khan and Honorio Banario, of the Philippines. The early going was reminiscent of a muay Thai duel, with the two trading blows on the feet. That was until Khan scored a double-leg takedown. The Singaporean’s wrestling advantage proved to be the perfect antidote for Banario’s high-kicking offense. After forcing the Filipino to the mat with a second takedown, Khan secured one hook, rolled to his side and sought a rear-naked choke. Banario defended admirably but eventually succumbed to the choke 4:34 into Round 1. Khan, now 11-3, has become a person of interest at 155 pounds. Banario dropped to 13-7.

Christian Lee disqualified for suplexing Edward Kelly. Such a ridiculous rule ONE has. Under the unified rules, any throw with an arc is legal. #ONEBeyondTheHorizon pic.twitter.com/hwSAuNfLLA

SUPLEX DISQUALIFICATION … In other One Championship affairs, Filipino star Edward Kelly met Singapore’s Christian Lee in a featherweight feature. Lee dominated from the get-go. After securing an early takedown, he transitioned to his opponent’s back and landed some effective strikes. When the combatants returned to their feet, Lee lifted his counterpart and dumped him to the canvas with an illegal belly-to-back suplex, which left Kelly unconscious but gave him the win by disqualification. It seems odd that One Championship forbids the suplex, considering that any throw with an arc is allowed under the Unified Rules. Kelly moved to 11-5 with the DQ victory, while Lee slipped to 9-3.

BRUTAL BEATDOWN … The LFA 48 main event was headlined by a bantamweight matchup between Roufusport prospect Raufeon Stots and Ryan Lilley. The contest was in its infancy when Lilley rocked Stots with a right hand. Wrestling aficionado Stots responded by landing a takedown. Stots’ boxing technique has improved immeasurably, and his jab proved particularly effective in this one. In the third stanza, Stots advanced to mount and delivered a barrage of heavy left hands, which forced the referee to call off proceedings at the 3:00 mark. “Supa” Stots upped his record to 10-1, while Lilley fell to 9-4.

FEATHERWEIGHT FRACAS … Supporting LFA action saw Kevin Croom square off with Nebraska native Darrick Minner at 145 pounds. Croom utilized crisp boxing throughout, and though Minner scored a first-round knockdown, it was soon apparent that he was overmatched on the feet. In the second frame, Croom took Minner’s back and rained punches and elbows on his turtled opponent until the referee called off the clash 2:10 into the round. Croom, aka “The Hard-Hitting Hillbilly” pushed his record to 18-10, while Minner dipped to 21-9.