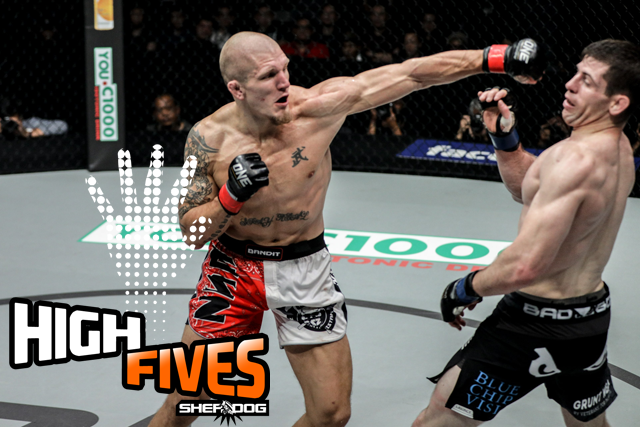 UFC Fight Night 140 was not the only big show taking place this past weekend. The vacant welterweight strap was on the line at Saturday’s One Championship: Warrior’s Dream, which took place at Gelora Bung Karno Sports Palace in Jakarta, Indonesia. The card also featured a number of other pivotal match-ups. On Friday, there were some thrilling contests at Invicta Fighting Championships 32, at the Firelake Arena, in Shawnee, Oklahoma.

HEAVY-HANDED BANDIT … The One Championship main event was a welterweight title fight between Sweden’s Zebaztian Kadestam and U.S.’s Tyler McGuire. The unbeaten American had dominated his previous opponents using his strong wrestling. But that was not the case this time out, as Kadestam displayed strong takedown defense throughout. Twenty eight seconds were remaining in the fifth and final frame, when the Swede lunged forward with a right hook to the head that sent McGuire plummeting to the mat. In claiming the promotion’s vacant welterweight strap, “The Bandit” upped his record to 11-4. With the first setback of his career, McGuire slipped to 11-1.

REAR-NAKED MASTERCLASS … Also at One Championship, Japan’s Hayato Suzuki clashed with Thailand’s Pongsiri Mitsatit in a strawweight encounter that had title implications. Having taken Mitsatit’s back on the canvas close to the cage, the Japanese combatant worked patiently for the fight-ending rear-naked choke, which forced Mitsatit to succumb 2:09 into the first stanza. In disposing of Mitsatit in such dominant fashion, Suzuki, now 20-1-2, likely landed himself a shot at the One strawweight belt. Meanwhile in defeat, adversary “Punhod” dipped to 9-2.

SUBMISSION SUCCESS … The One Championship card featured a featherweight bout between Holland’s Anthony Engelen and Jimmy Yabo of the Philippines. In the first frame, after grounding Yabo, Engelen transitioned from side control to his rival’s back, where he wasted little time in sinking in a rear-naked choke. Englen was left with no choice but to tap 2:35 into the opening period. Remarkably, this was the second win in eight days for “The Archangel,” who improved to 8-4. With the loss, “The Silencer” dropped to 5-7 (1 N/C).

FEATHERWEIGHT FIREWORKS … Headlining Invicta FC 32 was a featherweight title fight that pitted Florida’s Felicia Spencer against Minnesota’s Pam Sorenson. The contest proved to be a back and forth affair. Spencer threatened with a number of submission attempts, but Sorenson hung tough and defended. On the feet, Sorenson had some success with flurries of punches. In round four, Spencer took Sorenson’s back and from there she applied the winning rear-naked choke on her turtled-up adversary. In claiming the featherweight belt, “Feenom” maintained her unblemished record, which now stands at 6-0. “Bam” slid to 7-3.

STRIKING VIKING … Invicta FC 32, Kaitlin Young met Sarah Patterson. From the get go, Young, known as “The Striking Viking,” stayed true to her moniker by utilizing punches and kicks to dominate her overmatched rival. The bout was less than a minute and a half in, when Young laid into Patterson with a barrage of punches against the cage. Patterson had no answer to the onslaught. When she slumped down the fence, the referee called off proceedings 1:25 into the first frame. The TKO triumph saw Young move to 9-9 (1 N/C); while in defeat, Patterson fell to 4-5.