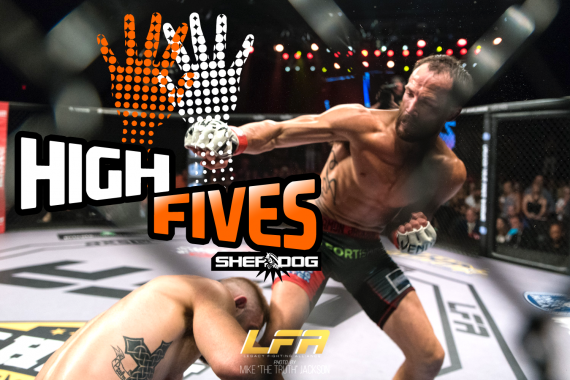 While there were no Ultimate Fighting Championship or Bellator MMA events during the weekend of Aug. 10-12, there was plenty of MMA-themed drama. Rizin Fighting Federation 12 on Sunday in Nagoya, Japan, witnessed some sensational finishes, and Legacy Fighting Alliance 47 on Friday in Dallas feature two thrilling featherweight battles.

KILLER KO … The Rizin 12 main event was a featherweight duel between Brazil’s Luiz Gustavo Felix dos Santos and Japan’s Yusuke Yachi. A Wanderlei Silva protégé, dos Santos not only took the fight on short notice but dominated proceedings from the start. The end came 2:32 into Round 2, as dos Santos connected with a right hook to the head that sent Yachi plunging face first to the mat. In his triumphant promotional debut, the unbeaten 22-year-old dos Santos moved to 9-0. All nine of his wins have resulted in finishes. Yachi dropped to 20-7.

Wow, Kiichi Kunimoto (20-7-2, 1 NC) chokes out Ryuichiro Sumimura at the bell! Beautifully transitioning from an RNC to the fight-ending arm triangle, "Strasser" scores his 10th submission win. The UFC vet is 9-2 in his last 11. #RIZIN12 #RIZINFF pic.twitter.com/HB0oBYz6IG

DOMINANT DISPLAY … Rizin 12 also featured an eagerly awaited welterweight clash between UFC veteran Kiichi Kunimoto and fellow Japanese pugilist Ryuichiro Sumimura. Late in the second stanza, Kunimoto dragged Sumimura to the mat against the ropes, threatened with a rear-naked choke and then moved seamlessly to an arm-triangle from side control. Kunimoto kept squeezing until his counterpart was unconscious, the referee waving off the contest with one second remaining in Round 2. Kunimoto rose to 20-7-2, while Sumimura dipped to 14-6.

NOT SO MAJESTIC … In a women’s strawweight confrontation at Rizin 12, Japanese professional wrestler Kanako Murata faced off with Angela Magana, aka “Your Majesty.” Murata effectively blended her boxing skills with the ever-present threat of a takedown, giving Magana no space in which to operate. Having secured a takedown in the second round, Murata spent considerable time in side control and drove her head under Magana’s right shoulder in an attempt to secure the submission. Meanwhile, Magana held on grimly to her opponent’s neck. Once Murata transitioned to mount, she increased the pressure and elicited the tapout at the 3:52 mark of the second round. The win improved Murata to 8-1. Magana slipped below .500 at 10-11.

TEXANS TUSSLE … The interim Legacy Fighting Alliance featherweight title was up for grabs at LFA 47, where Texas natives Damon Jackson and Nate Jennerman locked horns in the headliner. Jackson dominated from the outset, successfully utilizing his boxing and knees from the clinch in the first round. While Jackson could not find a submission once the action spilled onto the mat, he did land some damaging ground-and-pound. “The Leech” sealed the victory with an overhand right that saw Jennerman crumple to the canvas before eating a subsequent hammerfist. Jackson, now 16-2-1, brought it to a close 33 seconds into Round 2. He has won five fights in a row, all of them finishes. Jennerman fell to 12-4.

MIGHTY MOWLES … Also at LFA 47, Levi Mowles duked it out with fellow Texan Charles Cheeks III in a featherweight showcase. The first round was a standup affair and saw the two fighters trade punches, interspersed with an occasional kick from Cheeks. Early in the middle stanza, Mowles followed a left jab with a right cross that dumped Cheeks on the seat of his pants. A Brazilian jiu-jitsu black belt, Mowles wasted no time taking his adversary’s back, flattening him out and sinking the fight-ending rear-naked choke. Cheeks tapped 17 seconds into Round 2 and saw his record fall to 13-7. Mowles, meanwhile, moved to 10-3.