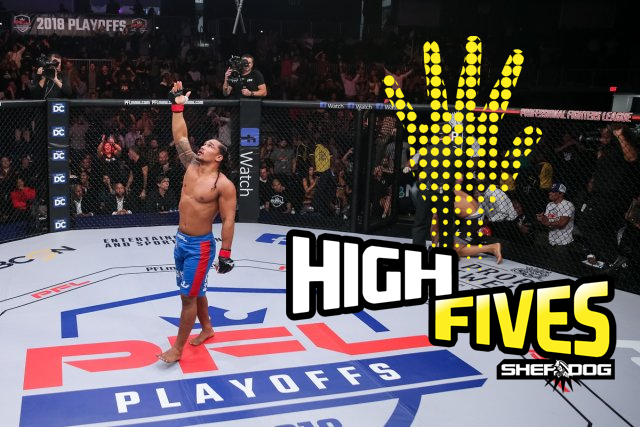 There were thrilling contests across three continents during the weekend of Oct. 19-21. Professional Fighters League 10 on Saturday in Washington, D.C., witnessed a fighter advance to the welterweight tournament final in emphatic fashion, while Fight Nights Global 90 on Friday in Moscow boasted two unforgettable bouts. Meanwhile, there was a stunning knockout at Pancrase 300 on Sunday in Tokyo.

Hawaii's Ray Cooper III is now 4-0 with four TKO wins under the @ProFightLeague banner, and he'll compete for a $1 million prize in December. In the meantime, check out his #PFL10 finish of Jake Shields.

RINSE, REPEAT … PFL 10 hosted four welterweight quarterfinals and the two semifinals. One of the quarterfinals saw Hawaii’s Ray Cooper III meet California’s Jake Shields in a rematch of their July 5 clash at PFL 3. This time, a right hook to the head from Cooper III sent Shields tumbling to the mat. Having followed his hurt adversary to the mat, Cooper III landed heavy ground-and-pound until the referee halted the action at the 3:10 mark of the first round. In beating Shields by technical knockout for the second time in a matter of months, “Bradda Boy” advanced to the tournament semifinals. Shields dipped to 33-11-1.

ANOTHER ‘BRADDA BOY’ BEATDOWN … In a PFL 10 welterweight semifinal, Cooper III squared off versus Brazil’s Handesson Ferreira. After driving the Brazilian towards the fence, Cooper III forced Ferreira to the floor, where the latter remained trapped and unable to get up, as the Hawaiian maintained a grip on his right ankle with his left hand. This meant that Cooper III’s right hand was free to unleash a barrage of punches, which gave the referee no choice but to stop the contest, 2:28 into the first frame. In progressing to the welterweight final, “Bradda Boy” improved to 17-4 and avenged a Nov. 18 decision defeat to Ferreira. Eliminated from playoff contention, Ferreira fell to 13-2-1.

BATTLE FOR THE AGES … Fight Nights Global 90 was headlined by an eagerly awaited middleweight matchup between Vladimir Mineev and Magomed Ismailov. The fight proved to be a highly competitive and memorable affair. Ismailov dominated the first frame and at one point appeared to have Mineev hurt with a left hook and a knee to the face combination. In the second, the favored Mineev landed a spinning backfist on his stocky opponent. In the fourth, Mineev, having shucked off a takedown attempt, held one arm aloft, presumably assuming that the victory was close. After five hard fought and entertaining rounds, it was declared a draw -- a decision applauded by the crowd. With the first draw of his career, Mineev’s record stands at 11-1-1. Isamailov moved to 13-2-1.

ONE FOR THE HIGHTLIGHT REEL … Also at Fight Nights Global 90, unbeaten Russian heavyweight Ali Isaev clashed with compatriot Alexander Gladkov. The short-lived match was brought to an abrupt end when Isaev, having feinted with his hands, spun around and delivered a left spinning kick to the temple of his rival. Isaev then pounded on the downed Gladkov with right hands until the referee dived in 1:26 into Round 1. With the spectacular finish, Isaev rose to 4-0. Meanwhile, Gladkov fell to 10-3.

Tatsuki Okano's first win comes in spectacular fashion, as he drops Katsuyuki Hironaka with a spinning heel kick! The KRAZY BEE product (1-1) takes it in the second round. #Pancrase300 pic.twitter.com/eaBDKivF34

FLYWEIGHT FIREWORKS … The Pancrase 300 undercard witnessed a flyweight fight between Japanese nationals Tatsuki Okano and Katsuyuki Hironaka. The end came when Okano threw a left kick that landed flush on the side of his adversary’s head and sent him crashing to the mat 34 seconds into the second stanza. The stunning strike saw 22-year-old Okano win for the first time, the Krazy Bee prospect having evened his record at 1-1. In defeat, Hironaka slipped 2-4-1.