HALIFAX, Nova Scotia -- On an evening that boasted nearly as much action in the audience as in the cage, Extreme Cage Combat Canadian light heavyweight champion Roger Hollett returned from an 11-month absence and easily handled Marcus Hicks at ECC 8 before a hometown crowd at the Halifax Forum.

The bout was the heavy-hitting Hollett’s first since he tore three knee ligaments in his first career defeat to American Top Team’s Lew Polley in October. Hicks tested Hollett's knee with an early battery of leg kicks but did not see past the two-minute mark.

After clipping Hicks with an overhand right, Hollett went to the body, alternating left and right hooks to the gut until a final left hand to the breadbasket broke Hicks. Hollett flurried on his prone foe to end the affair in just 95 seconds.

“The knee was 110 percent,” Hollett told Sherdog.com. “I knew he was going to try to test it, but I was ready for him.”

Hollett -- who also holds the Maximum Fighting Championship 205-pound crown -- next expects to see action in Edmonton, Alberta, on Dec. 5, when he will more than likely defend his MFC title against UFC veteran David Heath.

“No comment on David Heath,” Hollett said with a laugh. “I’m going to take a week off. Then it’s back the drawing board for December.”

While Halifax’s finest were busy keeping order in the crowd, Cory MacDonald kept his ECC Canadian welterweight title, as he gritted out a hard-fought majority decision over Matt MacGrath.

MacDonald -- one of the Great White North’s best-kept secrets -- generated little offense in the first frame, as he spent most of his time endlessly pummeling in the clinch with MacGrath. The champion showed greater offensive form in the second stanza, escaping from his back with an elevator and taking MacGrath to the mat, where he used his fists along the fence to even things up at a round apiece.

In an up-and-down third round, MacDonald and MacGrath traded back-and-forth takedowns, but MacDonald spent more time and landed more strikes on top. MacGrath scrambled to his feet with 30 seconds to go and got a desperate single-leg takedown, but MacDonald pulled rubber guard and used strong mission control to preempt any MacGrath offense. The move ensured the round and the decision for MacDonald.

“All my toughest fights are here in Halifax,” MacDonald said. “MacGrath was tough as s--t. He deserved this.”

Does the 30-year-old Kingston, Ontario, native believe he’s ready for a primetime promotion?

“I’ve beat UFC guys; I’ve beat some of the best guys here in Canada,” MacDonald said. “I beat Edwin Dewees, and then he gets signed for $15,000 to show with Affliction. What the hell?” 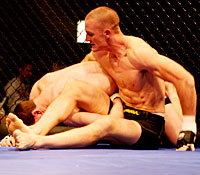 Graham Driscoll/Sherdog.com
Kyle Sandford works for an omaplata
on Chester Post.
In his second fight since returning from a four-year hiatus, Kyle Sandford showcased his sterling grappling game in a sensational first-round submission of Chester Post.

After Sandford easily achieved mount, Post attempted to bridge and roll, and the spindly Sandford was able to secure the arm and transition into an omoplata. Controlling Post’s head, Sandford wrenched the shoulder lock disgustingly deep, but Post made it clear he had no intention of tapping. Rather than abandon the position, Sandford locked on a rear naked choke and, with the shoulder lock still sunk deep, coaxed the tapout at 2:03 of the first round.

In women’s action, the much-improved Tannaya Hantelman carved into Jenna King with heavy kicks to the body en route to her first career win.

After a strong opening round, Hantelman intensified her offense in the second, as she began punctuating her kicks with hooks to the head. Early in the third frame, Hantelman smashed King with another left kick to the body and followed with two right hooks that forced King to cover up against the fence. Smelling blood, Hantelmann hacked at King with chopping elbows to the head that crumpled her opponent and ended the bout 49 ticks into round three.

In the most closely contested bout of the evening, undefeated Jason Rorison narrowly kept his unblemished ledger intact, as he captured a three-round, split decision victory over Craig Skinner.

After splitting the first two rounds, Rorison rocked Skinner with a short right hand from the clinch midway through the third, but he was taken to the floor when he attempted to follow up. While Skinner maintained top position, Rorison sat up and scrambled to a tight guillotine. With less than a minute to spare, Skinner escaped Rorison’s squeeze, passed to side control and delivered knees to the body until the horn sounded.

However, Skinner’s last-second salvo was not enough to sway the judges, as Rorison escaped with the split verdict.

Meanwhile, Aaron Jollimore collapsed a scrambling Nicolas Exame with a Clay Guida-on-Roger Huerta-style submarine uppercut and followed with a flurry of punches until an overwhelmed Exame submitted to strikes at 1:21 of the first round.

There were plenty of first-round stoppages to go around.

Jaret MacIntosh was unfazed by the cage door swinging open during his triangle attempt on Louis-Christophe Laurin, and a quick door closure allowed MacIntosh to close the bout. He tightened the triangle and rendered his opponent unconscious at the 3:19 mark of the first round.

Matt MacLennan gave Wayne Misener a literal gutcheck in his mixed martial arts debut, as he dropped Misener with a perfectly placed knee to the solar plexus that forced him to tap out at 1:23 of the first round.

In the evening’s curtain jerker, 44-year-old Tim Kelly earned his first win as a professional, as he submitted the debuting Kirk Pelletier with a standing guillotine choke 43 seconds into the second round.

Undefeated local boxing star Tyson Cave, who was set to make his MMA debut on the card, was left without an opponent at the 11th hour when slated foe Terry Kerr notified promoters 30 minutes before start time that he was suffering from rib and chest pains and would not make the event.

Cave -- whose posse rapped him to the cage and struck up confrontations with crowd members in the process -- announced both his facetious candidacy for mayor of Halifax and his intention to make his MMA debut on the next ECC card.