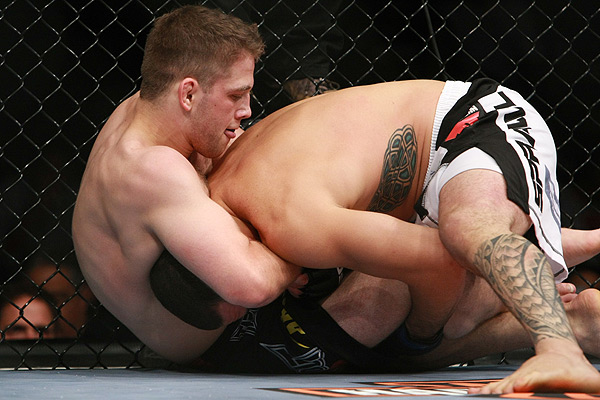 
A succession of recent moves appears to have permanently altered the trajectory of Nik Lentz’s career for the better.

In January 2012, the now 28-year-old El Paso, Texas, native was reeling from a no contest with Charles Oliveira and back-to-back losses to Mark Bocek and Evan Dunham, all at 155 pounds. The featherweight division beckoned. Since then, Lentz has handily defeated Eiji Mitsuoka in his 145-pound debut and followed it with the most significant win of his career -- a unanimous decision over Diego Nunes at UFC on FX 7. The victory vaulted Lentz into the top 10 rankings.

Having found a home at 145 pounds and at American Top Team in Coconut Creek, Fla., he attributes much of his success to a change in scenery.

Lentz sees two clear differences with his new team: the number of coaches available and the commitment to specialized training.

“I have a wrestling coach, I have two striking coaches [and] I have conditioning coaches,” he said. “There’s just a coach and a person always around to help you, so your growth is a lot faster.”

In addition, American Top Team has roughly 40 professional fighters at its disposal at any given time, allowing for access to a more diverse group of training partners.

“Everyone’s got to find their fit, and I think Nik definitely found his fit with us,” striking coach Roger Krahl said. “We’re very organized as far as when training times are, specific training, film study and stuff like that. It’s a professional sport, and we’re a professional sport team. If we want our sport to be the forefront sport, it’s got to be like that in every way.”

In addition to the change in gyms and weight class, Lentz has incorporated more conditioning and weightlifting into his routine. He believes his work with nutritionist Mike Dolce has made a significant difference.

His recalibrated diet includes post-workout meals, which allow him to endure multiple training sessions per day. As a result, Lentz estimates he trains as much twice as often as he once did. His strength and work ethic have impressed Krahl, along with his ability to compete with some of the gym’s more accomplished featherweights, including former World Extreme Cagefighting champion Mike Thomas Brown, Dustin Poirier and Din Thomas. 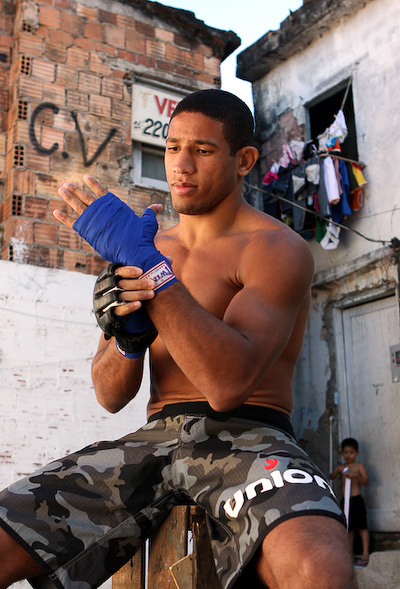 Lentz intends on continuing his climb up the 145-pound ladder when he meets the fast-rising Hacran Dias at UFC on FX 8 this Saturday at the Arena Jaragua in Jaragua do Sul, Brazil. There, he will step in as a late replacement for the injured Manny Gamburyan.

Spawned by the revered Nova Uniao camp in Brazil, Dias will enter the cage on a nine-fight winning streak. The 28-year-old made his promotional debut in June, when he defeated Iuri Alcantara by unanimous decision at UFC 147.

“He thinks that he’s ready to make that jump into the higher level, and unfortunately for him he got put in a bad situation because he had a fight and the guy got hurt and he got replaced with me,” Lentz said, “so it was bad luck on his end.”

Krahl hoped Lentz would draw another top 10-ranked opponent after beating Nunes, but he thinks a decisive victory over a highly regarded Brazilian will leave an impression.

“Hopefully, after [ending] this one in dominant fashion we get a top five,” he said. “I think he deserves it. He’s working hard. One fight at a time, though. We’re not underestimating anyone because Dias is a tough guy.”

Krahl views the bout against Dias as an opportunity for Lentz, an accomplished wrestler, to showcase his striking abilities.

“Everybody knows he can take guys down and beat them up, and [in] the last fight with Nunes, I think he showed a lot of people,” he said. “Not very many people, if any, have been able to hold Nunes down and do what he did in dominant fashion. That was mostly a ground fight, but we’re definitely excited to show off some standup skills for sure.”

Krahl likes the progress Lentz has made.

“This is my third camp with Nik since he came to the team, and each camp he’s getting better and better,” he said. “He’s really improved a lot. He’s got such a mentality of a grinder and [is] very aggressive. Just look out for him. More and more people are hearing his name, ‘The Carny,’ but look out for him because he’s coming hard.”