Fresh off his thrilling comeback victory over Andre Mafetoni in last November’s Cage Force EX, Monma looked to be the favorite in the bout, particularly given his dominant arm-triangle win over Ikemoto in January 2004. Both fighters started the bout trading low kicks, but it was Ikemoto’s limbs that covered the distance better to rack up offensive points. During an exchange on the feet, a grazing Ikemoto fist to Monma’s right eye caused him to start flinching. The punch arguably impaired his ability to see incoming strikes for the remainder of what would be a short fight.

Lunging for the superman punch but missing completely, Monma tumbled into a corner on the canvas. Ikemoto immediately capitalized, rapidly raining down a barrage of stomps as Monma up-kicked in defense. Ikemoto eventually relented and allowed Monma to return to his feet, but it didn’t stay there long. After trading several more kicks and eating a Monma one-two, Ikemoto drove a hard knee into Monma’s midsection against the ropes, doubling him over. With Monma crumpled on all fours, Ikemoto closed in for the kill, slamming punches to the sides of Monma’s head until referee Kenichi Serizawa called the bout at 1:42 in the first round.

“People like me who come from Osaka don’t really get to be main eventers in Tokyo, so I’m really glad that I was able to do so. I would like to fight in honor of Monma in the Dream grand prix, where I would like to win my second belt,” said a gracious Ikemoto post-fight.

EliteXC veteran Riki Fukuda made extremely quick work of former Deep middleweight champion Ryuta Sakurai, pounding out the veteran in under a minute. Sakurai barely had time to snap off a few punches before a Fukuda double-leg put him on his back. Fukuda hammered with big right hands to the side of Sakurai’s head, passing soon after to side control, where he swarmed with more brutal punches. Riding off to the left side, Fukuda continued hammering Sakurai with punches until the veteran dropped flat to his belly. Referee Yoshinori Umeki jumped in for the save at a mere 45 seconds into the contest. 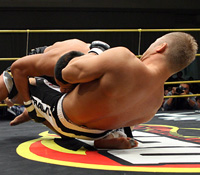 Daniel Herbertson/Sherdog.com
Ryuta Sakurai appeared to
suffer a right leg injury.
With the win, Fukuda becomes the No. 1 contender to Deep middleweight champion Yuichi Nakanishi. Despite having a cold that kept him from speaking into the mic, Nakanishi relayed his message to the ear of Deep ring announcer Nomatsu Omiya, commenting, “Fukuda’s performance tonight has really motivated me, so I’d love to rematch him for the title.”

In the fight of the night, Katsunori Kikuno took a thunderous TKO victory over Yarennoka and Dream veteran Bu Kyung Jung, stomping the Korean out late in the first round. Showcasing his karate skills, Kikuno planted and remained immobile, looking to fire big counter shots. Flooring Jung with a brutal left high kick halfway through the round, Jung was somehow able to endure the ground barrage that Kikuno followed up with.

A large hematoma developed next to Jung’s right eye, however, prompting a temporary stop for a doctor’s check. Kikuno then scored with two big body kicks to double Jung over in the corner. Kikuno followed with punches that dropped the hurt Korean to the mat for good, where he sealed the bout with a soccer kick and a stomp before referee Samio Kimura jumped in at 4:15 of the first round.

With the win, Kikuno advances to the final of Deep’s four-man lightweight tournament to face Koichiro Matsumoto, who won a lackluster but technically sound decision against UFC and Pride veteran Jutaro Nakao earlier that evening. While not particularly glamorous in his victorious performance, Matsumoto’s whipping low kicks into the lead leg of Nakao turned it an ugly, bruised beet red. Nakao, for all his attempts to chase Matsumoto down with punches, could not find any way to break through his defenses to score points. Pulling guard on Matsumoto to bring the fight down also proved futile as well, leaving the judges no choice but to unanimously award Matsumoto the win on all three scorecards.

Former Shooto 143-pounder Makoto Ishikawa took another loss to a heavier fighter in his bout against former Deep welterweight champ Hidehiko Hasegawa, after Hasegawa pitched a shutout two-round decision. While not looking particularly savvy on the feet, Hasegawa alternated between putting more effective punches on Ishikawa’s face while dominating him on the mat, taking mount and back position at will to pound away. Ishikawa was hard-pressed to reverse on the ground or even evade Hasegawa’s strikes, missing his own big shots by wide margins.

“My father just passed away on January 25,” said Hasegawa, bringing a portrait of his father with him into the ring. “Today, I would like to have everybody say goodbye to my dad with me.”

Persey chased Tazawa momentarily with more flurries, landing more from top when Tazawa hit the mat under their pressure. Tying Big Perm’s hands up to stop the barrage, Tazawa then managed to get to his feet where he scored the trip takedown. From side control, Tazawa pulled Persey into a kesa-gatame scarf choke for the tapout at 2:55 in the first round.