SAITAMA, Japan -- The wily Masakazu Imanari stole a close split decision from Atsushi Yamamoto in the Dream 7 main event on Sunday before 19,528 at the Saitama Super Arena.

Having floored Imanari with a straight right early in the opening period of their featherweight grand prix match, Yamamoto found himself neutralized once he dove into Imanari’s guard for the finish. In fact, Imanari later claimed he was never fazed by Yamamoto’s attacks, opting instead to play possum and bait his opponent into engaging him on the mat.

The tactic worked for the “Ashikan Judan,” as Yamamoto had to fend off his submission setups and rubber guard while on top. Yamamoto worked punches to the body and side of Imanari’s head whenever he managed to free his arms. Imanari’s pretzel-legged defense from the bottom did more than set up submission opportunities, however, as it kept Yamamoto from racking up any serious damage outside of what small punches he could deliver. As such, Yamamoto earned a sharp yellow card penalty for inactivity.

In the latter half of the 10-minute first period, Imanari (16-6-1) reversed and took top position in half guard after referee Daisuke Noguchi repositioned the fighters in the center of the ring. Passing to mount and side, Imanari landed knees to the body before attempting the armbar. Yamamoto (12-6-1) stacked, scrambled and pulled the arm free before finishing the round on top in Imanari’s guard.

Imanari continued his frustrating ground game in the second ground -- he earned a yellow card for stalling -- and Yamamoto refused to fall into his traps on the mat. Neither man took the upper hand. Two judges scored the bout for Imanari; a third dissented and gave the nod to Yamamoto.

“I don’t have anything to say,” Yamamoto said. “I thought I won. It was ruled a loss, so I’ll admit that I lost. He may have tried to, but I don’t think he came for leg locks. I was prepared to respond to them, but he didn’t go for them.”

In other tournament action, Dong Sik Yoon pupil Jong Won Kim impressed in his debut on the big stage, as he frustrated World Extreme Cagefighting veteran Hiroyuki Takaya with his stand-up skills. 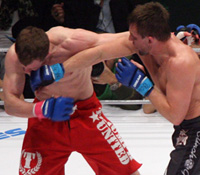 Daniel Herbertson/Sherdog.com
Chase Beebe was
dominated by Joe Warren.
Kim (0-1) slipped under many of Takaya’s punches and returned fire with jabs and body shots of his own. Takaya scored consistently with low kicks, two of which Kim timed and caught for the trip. The “Streetfight Bancho” had better luck in the second round, as the tiring Kim ate a right hand against the ropes that sent him crashing to the mat. Referee Kenichi Serizawa jumped in at the 40-second mark, as Takaya (10-6-1) finished up with several more right hands.

Meanwhile, Micah Miller’s adoption of the long spats did not seem to help much against Yoshiro Maeda in a battle between WEC veterans.

Maeda (24-6-2) scored with takedowns in both rounds, and with Miller unable to capitalize with the rubber guard and omaplata attempts from the bottom, the Japanese fighter pulled ahead in the grappling department. Miller (10-3, 1 NC) delivered several knees from the Thai plum but was largely unable to find a home for his rangy punches before Maeda took him to the mat. All three judges awarded the bout to Maeda, who advanced in the tournament.

Elsewhere, Tatsuya Kawajiri made quick work of Ross Ebanez with a first-round submission. Weighing in over the limit on the previous day, Ebanez was penalized with a yellow card at the beginning of the bout. It did not appear to matter much, as Kawajiri quickly took down Ebanez (19-7, 3 NC) and kept him there, landing small punches until the Hawaiian surrendered his back. Kawajiri (23-5-2) sank the rear-naked choke for the tapout at the 4:03 mark.

Afterward, Kawajiri pleaded for a match with American Top Team ace Gesias Cavalcante in order to determine the number one contender for Joachim Hansen’s lightweight title.

With world-ranked lightweight Shinya Aoki on David Gardner’s back, the American made the mistake of waving to the crowd and yelling “Hello, Japan!” instead of defending against the choke. Aoki (20-3, 1 NC) seized the opportunity and cinched the rear-naked choke, at once punishing Gardner (16-11) for his antics and coaxing the tapout 5:58 into the first round.

A lightweight superfight with Daisuke Nakamura provided a return to form for Mitsuhiro Ishida, as he stayed on Nakamura (19-10) with takedowns and top control for two rounds and cruised to a unanimous decision. Nakamura repeatedly looked for armbars and kimuras, but Ishida (18-4-1) pulled his arms free, dropped small punches from the top and racked up the points.

King of the Cage champion Abel Cullum also advanced in the featherweight grand prix, as he threw caution to the wind and took the fight to Akiyo Nishiura in a two-round war.

Known for his tendency to catch opponents with winging counters, Nishiura’s previous foes were often wary to engage. Cullum (14-2) was not, as he lunged forward with big hooks from the opening bell. Though he took down Nishiura, Cullum had a difficult time keeping him there, as Nishiura reversed from mount into Cullum’s guard repeatedly. Despite wobbling and putting serious lumps on the forward pressing cowboy, Nishiura (9-4-1) conceded far too many takedowns and positional disadvantages, as all three judges awarded the bout to Cullum.

In another featherweight tournament showdown, Joe Warren may not have eaten Chase Beebe’s heart, but he stopped the former WEC bantamweight champion on a cut.

Warren absorbed a number of significant shots from Beebe (12-4) thanks to his reckless forward momentum, but the Greco-Roman wrestling champion was undeterred, as he fired away with punches and knees of his own before clinching and working some dirty boxing. After a thunderous double-leg takedown in the final moments of the first round, the two men scrambled to their feet. Warren (1-0) landed a knee to Beebe’s left eye that opened a cut that resulted in a stoppage between rounds.

Finally, Bibiano Fernandes pulled out a unanimous decision against Japanese prospect Takafumi Otsuka despite earning a yellow card for inactivity in the first round.

Fernandes (4-2) imposed his will in the grappling department and also stunned Otsuka (8-4-1) with a right knee to the jaw in the second round. Ultimately, all three judges sided with the Brazilian.