Going into the inaugural regular season of Professional Fighters League, middleweight was not the most talent-laden division, nor the one with the greatest name recognition, though it was not the worst, either. It was, however, quite possibly the weirdest.

As the playoff bracket shows us, it ended up playing out just as weirdly. Exhibit A: All four Americans ended up on the same side of the bracket, guaranteeing that an American -- but only one -- will make the finals. For true weirdness, though, one need look no further than the curious case of Sadibou Sy. Sy began the regular season by losing a grinder to Ultimate Fighting Championship and Bellator MMA veteran and all-around unanimous decision machine Bruno Santos. Then Sy was pulled from his second fight -- and the playoff running -- for some reason. Then he was back in, but in need of a second regular-season bout to determine his playoff position. In came Caio Magalhaes, who had never fought for PFL before and was on a two-fight skid. Needless to say, Sy punched his ticket to the playoffs, where he will now face the burly Santos once more in what is not likely to be riveting viewing.

That is not to say that this weekend’s middleweight offerings are all duds. We get to see Abusupiyan Magomedov at work; the No. 1 overall seed has been a revelation, earning his way here with two nasty knockouts in barely five minutes of total cage time. Louis Taylor, the No. 2 seed, is pushing 40, yet on an 8-1 tear with the only setback coming at the hands of former two-division World Series of Fighting champ and current UFC contender David Branch. The man who once called himself “Handgunz” and now goes by “Put The Guns Down” is talking about retirement, philanthropy and giving back to his beleaguered hometown of Chicago -- but it all hinges on the life-changing purses at stake in these playoffs. 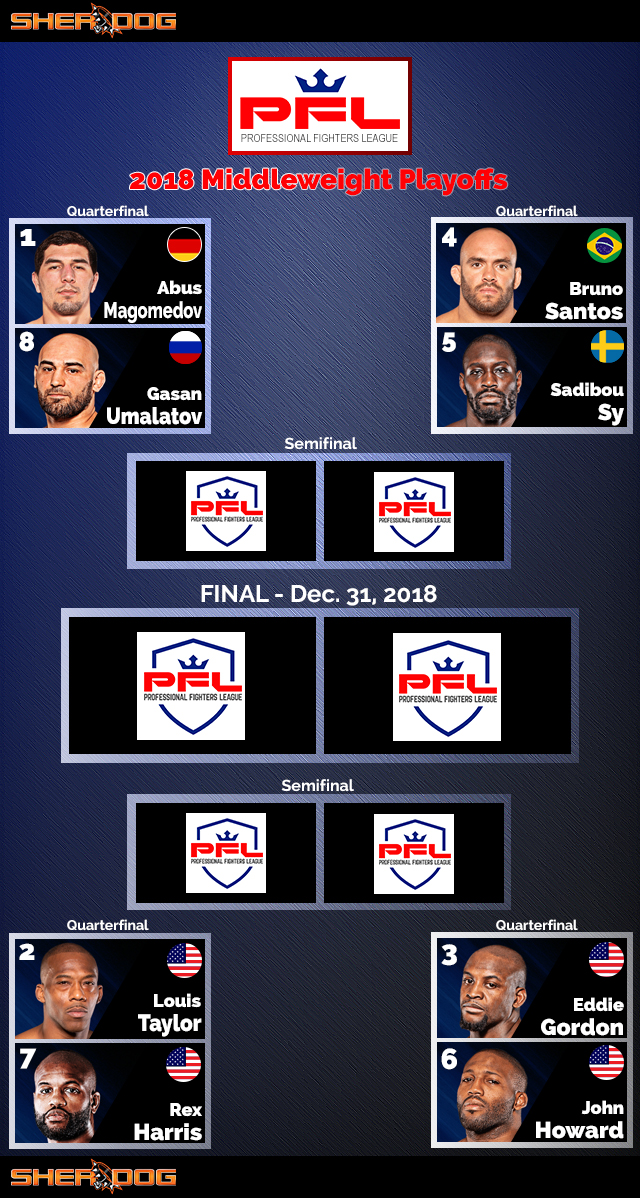