With last Saturday’s PFL 10 done, all six of Professional Fighters League’s divisions now have final matches set for the organization’s New Year’s Eve card at Madison Square Garden. Of the six divisional playoffs, perhaps none encapsulates the best and worst of PFL’s inaugural season as well as welterweight.

The best, without a doubt, is Ray Cooper III. On Saturday, Cooper overwhelmed Jake Shields with strikes and stuffed the veteran grappler’s attempts to get the fight to the ground on the way to a first-round stoppage, showing that his July regular-season victory over Shields may have been an upset but was no fluke. Between the regular season and the playoffs, Cooper is now 4-0 on the year with four resounding knockouts, three of them in the first round. Cooper will face Magomed Magomedkerimov in the final, in a matchup of the two most dominant fighters in the field.

For the worst of what PFL has had to offer, look no further than the quarterfinal between second-seeded Abubakar Nurmagomedov and No. 7 Bojan Velickovic. First, their fight ended in a draw, which led to Nurmagomedov advancing, due to PFL’s rule that the first round winner advances such a case. In practice, that rule has led to a preponderance of dull fights in the playoffs, as it all but encourages one fighter to coast the second round. However, Nurmagomedov was ruled medically unable to continue, something that has happened rarely in these playoffs but hovers over the proceedings as a distinct drawback of the one-night tournament format. Therefore, Velickovic, who had just fought to a ho-hum draw and been given the dispiriting news that he was eliminated, was put back into the bracket only minutes later. Later that evening, he was drubbed by Magomedkerimov in their semifinal, and while Magomedkerimov would have been the favorite either way, one wonders how much Velickovic’s more grueling quarterfinal and subsequent emotional roller-coaster played into the result. 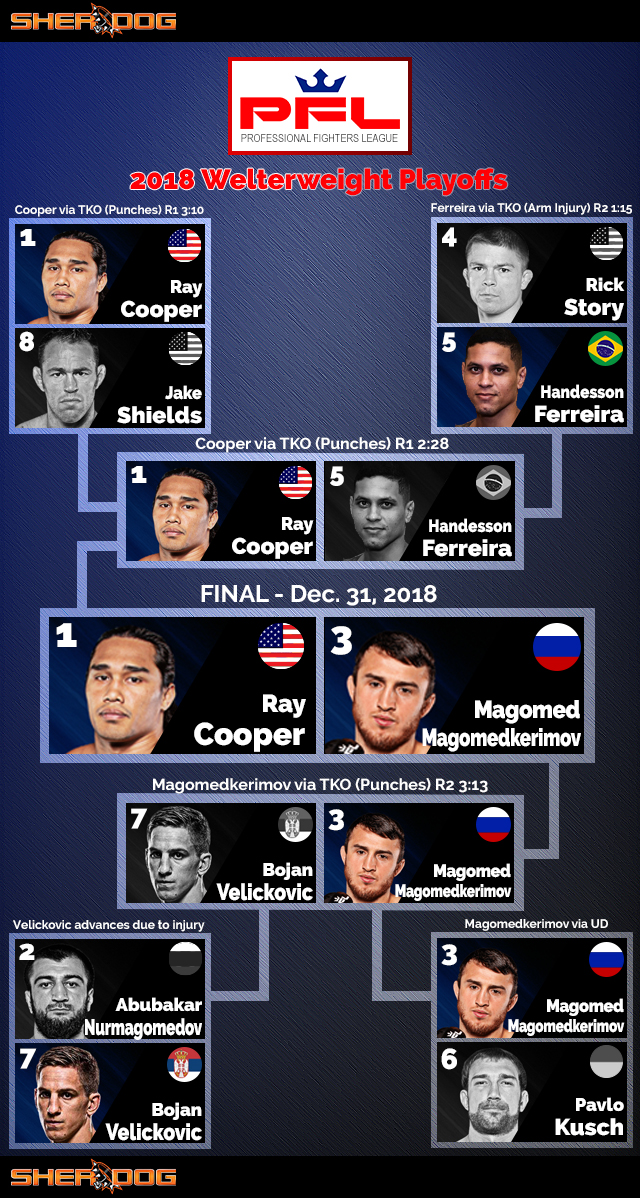