TOKYO -- Katsuya Inoue defeated Koji Oishi by unanimous decision to become the lightweight King of Pancrase in the main event at Pancrase “Shining 10” on Sunday at the Differ Ariake Arena.

The first round started slowly, as Inoue took a southpaw stance and landed some kicks, while Oishi controlled the pace by clinching into the corner. Neither fighter inflicted much damage.

As Inoue continued to land knees and kicks, Oishi (17-8-5) shifted his focus in the second, as he threw an overhand right that missed its mark and transitioned to a takedown. Stuck with his back to the corner, Inoue worked a seated half guard, landed a few light punches and returned to his feet. Oishi later tried for another takedown, but Inoue defended well and made him pay with knees.

Inoue (17-6-3) picked up steam as the fight progressed. In the third round, Oishi again tried for the takedown, only to be met by knees and clean combinations.

Ultimately, Inoue’s efforts were enough to warrant a unanimous decision from the judges, as he became the second lightweight King of Pancrase. The 29-year-old rebounded nicely from his technical knockout loss to Nick Diaz at Dream 3 in May and posted his second victory in as many bouts against Oishi. He knocked out the 31-year-old UFC veteran the first time the two met in May 2007.

The Pancrase show also saw titles awarded in the bantamweight and welterweight divisions.

Manabu Inoue stunned the previously unbeaten Seiya Kawahara, as he cinched a rear-naked choke in the second round to become the first bantamweight King of Pancrase. 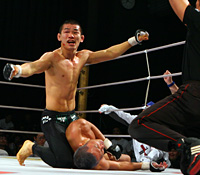 Daniel Herbertson/Sherdog.com
Manabu Inoue (left)
vs. Seiya Kawahara
From the start, Inoue’s game plan was clear, as he immediately shot for a takedown and clinched in the corner. Inoue caught a knee from his 20-year-old foe, slammed him to the mat and wound up in side control. Kawahara then used an acrobatic reversal to gain top position and avoid danger. Inoue soon scrambled back to his feet, where he attempted another takedown. This time, Kawahara fired a perfectly timed knee that landed hard, though it did little to discourage Inoue’s efforts.

Inoue (7-5-1), whose face began swelling from the first-round knee, went for more takedowns in the second. Kawahara made him pay with punches, and the referee stepped in to have the doctor check Inoue.

After he was cleared to continue the fight, Inoue’s persistence paid off. At the end of the round, he scored with a double-leg takedown into side control. Kawahara (6-1) surrendered his back in an attempt to escape, but Inoue tightened a body lock around him, flattened out his opponent and fired punches to the side of his head. That set up the rear-naked choke, as Inoue -- who had lost four of his last five bouts -- coaxed the tapout 4:44 into round two.

Meanwhile, Takuya Wada and Masahiro Toryu settled their score in a welterweight title bout after fighting to a draw in October.

Early action was sparse, as Wada landed a clean straight right and Toryu delivered some kicks to the legs and body. Their paced picked up in round two, as both men tried for takedowns. Wada landed the more significant strikes, but Toryu scored with kicks and secured a takedown at the end of the round.

Their pace did not slow as the bout moved to a final round. Wada shot for a takedown, and while Toryu met his efforts with a perfect sprawl, he was unable to score with anything significant. After the two returned to a standing position, Toryu came at Wade with high-risk strikes. A front kick and side kick landed, but Wada used Toryu’s momentum to score a last takedown.

In non-title action, Ichiro Kanai showcased his superior ground skills in a middleweight showdown with Pride Fighting Championships veteran Daijiro Matsui, as he needed a shade more than two minutes to secure the submission.

Kanai dropped Matsui (10-21-4) with a straight right hand and passed quickly to side control. There, he worked for an arm triangle, which ended the match 2:25 into round one. The 26-year-old Kanai (9-9-3) has rattled off three straight wins.

Nakai (5-0) took the fight to Sunaba early, as she rocked her experienced opponent with a heavy right hand. She then closed the distance, threw Sunaba to the ground and landed in side control. Once Nakai mounted, she capitalized on Pancrase rules, which allow punches to the face of a downed woman.

With Sunaba (12-9) unable to escape, the referee intervened and called an end to the fight 1:33 into the first round.