Quinton “Rampage” Jackson did not score any style points, but he won a war of attrition with a man who has made a living off of them.

The former light heavyweight champion knocked down Keith Jardine twice with left hooks and notched a unanimous decision against the gangly veteran in the featured bout at UFC 96 “Jackson vs. Jardine” on Saturday at the Nationwide Arena in Columbus, Ohio. Scores were 29-28, 29-28 and 30-27.

Barring any unforeseen circumstances, Jackson (30-7) will face champion Rashad Evans for the light heavyweight crown at UFC 98 on May 23 at the MGM Grand Garden Arena in Las Vegas.

Jackson struggled to acclimate to Jardine’s awkward style and ate his share of leg kicks, but the thunder he carried in his hands proved the difference. Jardine (14-5-1) attacked effectively in the first round, as he popped Jackson with punches and kicks before circling away from his power. The tide turned in round two, however, as Jackson dropped Jardine with the same left hook that finished Wanderlei Silva at UFC 92. The Memphis, Tenn., native tried to end it with ground-and-pound, but Jardine regained his footing, clinched against the cage and regained his composure. 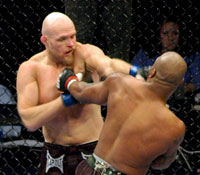 Photo by Sherdog.com
Quinton Jackson slugged
his way to victory.
The battle spilled into a third round, where Jardine fired away with his feared leg kicks and the occasional straight right hand. Late in the period, Jackson softened him with three left hooks to the head and then planted him on the canvas with a right hand-left hook combination in the final 10 seconds of the fight. The knockdown sealed the victory for Jackson, who won for the eighth time in nine bouts.

“I feel good,” Jackson said. “There was a lot of pressure on me coming into this fight. Keith’s tough. I didn’t expect him to be that tough. I won’t call him ‘Sardine’ no more.”

In the co-main event, Shane Carwin cemented his place among heavyweight contenders, as he stopped Gabriel Gonzaga on first-round strikes in just 69 seconds.

Stung by three early right hands, Carwin had to overcome some significant adversity. Gonzaga scored with a takedown but failed to capitalize, his world-class grappling skills short-circuited by the size, strength and fortitude of his opponent. The monstrous Coloradan stood and ate another right hand from Gonzaga (10-4) during an ensuing exchange. Carwin fired back with a short, straight right of his own that dropped the big Brazilian against the cage, and he finished the former heavyweight title challenger with thunderous punches on the ground.

“Right off the bat, he caught me a couple of times,” Carwin said. “I was able to refocus and get after it.”

Carwin (11-0) still has never been pushed beyond the first round. In fact, all but one of his bouts has ended inside two minutes.

Brown (9-7) set the tone with two head kicks and a Superman punch before he leveled the Matt Serra protégé with a left-right combination. Referee Yves Lavigne moved in to save the fallen Sell but decided instead to allow the Brazilian jiu-jitsu black belt to continue. Brown kept up his assault, as he blasted away at Sell (8-5) with knees and elbows from the clinch. With Sell noticeably staggered, he stumbled backward and fell to the mat without being hit, and Brown looked again to Lavigne to intervene.

“I could see he was out on his feet,” Brown said.

“The Ultimate Fighter 7” product landed two standing punches on his grounded adversary and ended it with a bang 1:32 into round one. The 28-year-old Ohioan has won three of his last four fights.

“I feel bad for Pete Sell,” Brown said. “He’s a warrior. He was smiling at me when I was punching him and the ref stopped it.” 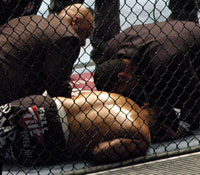 Photo by Sherdog.com
Munoz was knocked out cold.
In light heavyweight action, Matt Hamill knocked out the previously unbeaten Mark Munoz with a brutal first-round head kick. Munoz, a national wrestling champion at Oklahoma State University, met his end 3:53 after the fight began.

Hamill (6-2) set the tone from the opening bell, as he stalked Munoz with relentless intent. The two exchanged at a measured, sometimes plodding pace, as Hamill avoided the Californian’s takedown attempts and struck with thudding punches. Late in round one, he backed Munoz (5-1) against the cage and threw a wicked head kick that will not soon be forgotten. Hamill landed three subsequent punches on his fallen foe, who was motionless against the cage.

A three-time All-American at Michigan State University, Maynard used his wrestling skills to keep the fight standing and repeatedly slammed his sledgehammer of a right hand into Miller’s face. By the end of the first round, Miller (13-2) was cut above the left eye and bleeding heavily from the nose.

Maynard worked his boxing throughout the fight and battered Miller with shots to the head and body. Miller enjoyed a brief glimmer of hope in the third round when he threatened with a kneebar following a Maynard takedown. Once the Xtreme Couture product escaped, however, Miller’s fate was sealed.
Click here to read the Sherdog.com UFC 96 preliminary report
SHARE ON FACEBOOK SHARE ON TWITTER
Related Articles
Latest News
+ VIEW MORE