Kang, meanwhile, had suffered two first-round stoppages since his last title defense and the impressive Pride middleweight grand prix showing that rocketed him to as high as fifth in the Sherdog.com middleweight rankings.

The contest began with restraint, as both fighters looked to find their range. Kang connected with a few jabs and a lead uppercut, but it was Kim who landed the first hard shot, an overhand right, which momentarily stunned Kang. Kang, however, converted what would have been scored a knockdown into a double-leg shot, and regained his composure while working from Kim’s guard. After a few short arm punches, Kang looked to pass, but Kim used an improvised sweep and the leverage from his 25-pound weight advantage to engineer an escape.

This is when the Denis Kang (Pictures) of old emerged, the one willing to forgo self-preservation and the caution that may have aided him in some recent outings. A frenzied standing exchange of wild hooks ensued. Kang, the more accurate striker, dropped Kim and finished the fight via pounding. Then, for good measure, Kang blasted Kim with a heel stomp as he walked away. 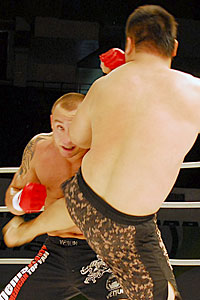 Greg Timlin/Sherdog.com
Denis Kang scores with a left hand.
With the win, Kang improved his record against Jae Young Kim (Pictures) to 3-0, while logging a combined total of 3:47 in the ring.

On the welterweight front, former titleholder Ui Cheol Nam made short work of Mokpo Pride Academy fighter Se Young Kim, who had taken the fight on short notice after current welterweight champ Kwang Hee Lee (Pictures) injured his right hand in training last week. It was Nam’s first fight back since the 2006 welterweight grand prix final, due to hand injuries of his own. Even before the bell, Nam had his 18-year-old opponent visibly shaken via staredown during the prefight instructions.

Action began with standing combinations from both fighters, but Kim soon found himself defending from half guard. After a sweep attempt failed, Nam took his back and nearly sank a rear-naked choke before resorting to strikes. Kim turned turtle, and the referee stepped in with just 52 seconds elapsed in the first round.

Ui Cheol Nam is a banger, to say the least, and the best way to categorize Kwang Hee Lee (Pictures)’s fighting style might be to label him as a Korean Phil Baroni (Pictures), minus the takedowns. The Lee vs. Nam title fight, tentatively scheduled for mid-October, is going to be a good one.

Fight of the night honors at Spirit MC 18 go to Jin Suk Jung (Pictures) and Jae Hyun So (Pictures).

Round one began with both undercard fighters looking to score punches without entering their opponent’s range, but quickly progressed into flurries of hooks and knees. The round ended with So stuck in the corner and Jung throwing repeated hooks in what looked like a 30-second drill on the heavy bag.

In the corners, So’s face was visibly swollen while Jong’s left cheek was purple, and seemed to show individual knuckle marks.

The second stanza began with windmilling from both fighters. Jung managed to land what, for lack of a better term, could be called a non-flying, lead-knee. A sloppy double-leg attempt followed, but after Jung connected with a second lead-knee, a glancing left hook was all that was necessary to drop So. Pounding from Jung finished the fight at 1:21.

In other results of note, former MARS fighter Hoon Kim scored a minor upset of Ho Jin Kim (Pictures) via wild left hook for a knockout at 4:27 of the first round. Ho Jin Kim (Pictures), a mainstay Spirit MC fighter not known for a weak chin, collapsed while being led from the ring and was backboarded to an ambulance. Ye Won Nam and Jeong Hyeon Hwang hugged in the center of the ring before their bout, then Nam smashed Hwang unconscious via repeated stomps at 1:27 in the first round.