Tim Kennedy walked right through Zak Cummings and his undefeated record in the Strikeforce “Challengers Series 3” main event on Friday at the SpiritBank Event Center in Tulsa, Okla.

A United States Army Special Forces veteran, Kennedy mauled Cummings from the start, pounded him mercilessly throughout a lopsided opening round and moved in for the kill. Ultimately, he locked in a fight-ending North-South choke for the finish 2:43 into round two, as the International Fight League and World Extreme Cagefighting veteran posted his 11th win in 12 fights.

At a distinct disadvantage in terms of high-level experience, Cummings -- an injury replacement for Evangelista “Cyborg” Santos -- yielded a takedown inside the first 30 seconds and proceeded to absorb the kind of macabre ground-and-pound that would have broken a lesser man. Kennedy mounted him twice, secured back control and flattened him out near the end of the opening period, landing brutal blows from top position.

Cummings fought bravely but lacked the firepower he needed to survive. With his right eye swelling from the punishment, he lunged at Kennedy with a reckless takedown attempt and was met instantly with a tight guillotine choke. He attempted to escape, but Kennedy transition beautifully to the North-South position, gave a nod and waited for the inevitable. Seconds later, Cummings raised the white flag.

“That guy’s a champ,” said Kennedy, a 30-year-old father of two. “I promise you, I don’t want a fight against him at this time next year.”

Kennedy has already thrust himself into title contention and will have his eyes fixed on the Sears Centre Arena in Hoffman Estates, Ill., on Nov. 7, when Jake Shields and Jason “Mayhem” Miller meet for the vacant Strikeforce middleweight championship.

“Both guys are good friends and amazing fighters,” Kennedy said. “I want the middleweight title. I don’t know if I’m ready for it yet. I’m excited. It’s just going to get better and better.” 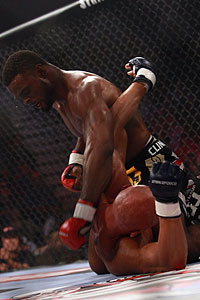 The unbeaten Tyron Woodley showed the world why many view him as one the top prospects in the sport.

Woodley dominated the well-traveled Zach Light en route to a second-round armbar submission, as he posted his fourth victory in as many fights. The two-time collegiate All-American snatched the armbar when Light attempted to scramble free from the mount, eventually coaxing the tapout.

Woodley had no trouble dispatching Light. The ultra-talented welterweight scored with three takedowns, mounted Light multiple times and threatened him with arm-triangle chokes before securing the armbar.

“He had no quit in him,” Woodley said. “He was a tough guy. I’m still young, growing. Overall, I feel good about my performance.”

Two-time Olympic wrestler Daniel Cormier cruised past Gary Frazier in his anticipated professional mixed martial arts debut, as he stopped the athletic Oklahoman on second-round strikes. The end came 3:39 into round two.

A Grizzly bear in fight shorts, the 30-year-old Cormier dictated the pace from the outset. The American Kickboxing Academy representative overwhelmed Frazier, 21, in the first round, as he captured top position on the ground and hammered away with short quick shots to the head and body.

Round two followed a similar path. Eventually, Cormier moved to mount and flattened out Frazier after he surrendered his back. A barrage of unanswered punches ensued, and Frazier wilted.

“I came to fight,” Cormier said. “This is what I chose to do. I landed some big right hands, and I just kept pressuring him.” 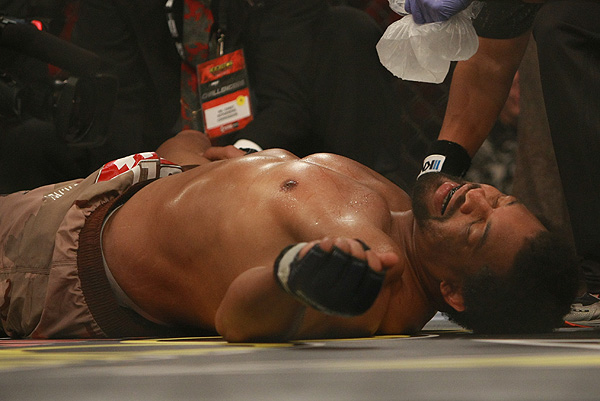 In only his second MMA appearance, decorated kickboxer Ray Sefo caught a break when UFC veteran Kevin Jordan was cut down by a knee injury and verbally submitted 24 seconds into the second period of their heavyweight duel.

“You never want to win like that,” Sefo said, “but I’ll take the win and keep on learning.”

Jordan controlled much of the first five minutes. The 38-year-old Columbus, Ga., native reversed into top position, passed to side mount and dropped heavy punches on Sefo, a lethal striker who had few answers on the ground. Jordan ultimately moved to mount and spent the final 1:25 of the round there, unleashing punches until the horn sounded.

“I was very comfortable there,” said Sefo, who returned to the MMA scene after a four-year absence. “I was able to relax, but I’ve got to get back in the gym as quickly as possible and keep drilling my jiu-jitsu and wrestling.”

Jordan, his knee visibly damaged, was assisted from the cage after losing for the third time in four fights.

In a memorable battle between two undefeated prospects, Thomas Longacre put together crisp combinations with his hands and feet en route to a unanimous decision victory against Travis Calanoc. All three judges scored it 30-27.

Calanoc, his offense confined to a stinging left hook and some jarring knees in the first round, held his own standing but faded over the last two rounds. Longacre worked beautiful combinations with punches and kicks, landing to the head, body and legs, as he picked apart his foe from the outside. Calanoc fared far better when he closed the distance.

Longacre put an exclamation point on his fourth consecutive victory in the third period with a pair of takedowns, as the two men finished with a standing flurry for the final 10 seconds and brought the crowd to its feet.

“We gave them a war,” Longacre said. “We delivered.”