In addition, the promotion’s featherweight tournament stormed out of the gates, with consensus favorite Hatsu Hioki notching an opening-round submission.

Though Lawal (4-0) did not secure the tapout he claimed he was pursuing before the bout, his match with Kawamura proved to be a one-sided affair.

“King Mo” relentlessly pressed for takedowns, whipping down the hapless Kawamura (9-4-2) to all fours. Riding off to the side, Lawal launched a battery of punches to the head and face of the Japanese champion, who repeatedly crawled to nearby ring posts to hide from his assault. In response to repeated takedowns and four big slams, Kawamura’s scuttling into the corner to hide became a recurring scene throughout the fight.

Kawamura had nothing to offer Lawal, as the young prospect went the distance for the first time and took a lopsided decision by 30-24, 30-27, 30-27 scores.

Afterward, Lawal indicated that an injury to his right knee kept him from sinking in his hooks on the turtled Kawamura; he claimed he was hurt while training with UFC veteran Dean Lister.

“I injured my knee about a week ago,” Lawal said. “I kinda tweaked it rolling around, and I tried to rehab it as much as I could before the fight.”

In a masterful performance, Hioki (18-3-2) put a grappling clinic on Chris Manuel, as he captured a dominant armbar-induced submission and handed the World Extreme Cagefighting veteran his first defeat.

Hioki passed from half guard to mount from the opening takedown, and Manuel immediately surrendered his back. Though Manuel (6-1-2) soon extricated himself from the precarious position, Hioki put the American Top Team product on his back again soon after. Eventually passing to mount, Hioki set up a triangle choke while sitting on Manuel and dropping punches. Manuel attempted to defend, but Hioki refused to be denied and pulled out the armbar for the tap 4:12 into round one. 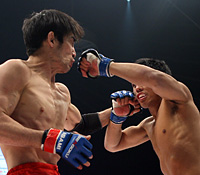 Phan (15-5) pressured on the feet, as he chased Kadowaki with punches. The southpaw Kadowaki returned the favor in kind, countering with sharp jabs and quick left straights. Phan pumped two distracting jabs before swinging with the fight-ending right hook. The South Vietnamese fighter lunged to finish the downed Kadowaki (13-9-2), but referee Yoshinori Umeki dove in for the save at the 3:09 mark.

The key for Omigawa (5-7-1) was his ability to take the fight to Davis in the clinch, where he repeatedly scored with the trip takedown and eventually passed to side control and mount. Davis (13-2) was unable to defend against either and was taken down almost at will. Once on the mat, he ate short punches on the bottom. All three judges gave the bout to Omigawa. Scores were 30-28, 30-28 and 30-27.

Marlon Sandro had an even easier time in his grand prix debut.

The undefeated Sandro was headed for a solid unanimous decision victory but ended up choking out a standing Matt Jaggers in the second period.

Sandro (13-0) had the fight well under control, as he imposed top position dominance in both rounds before Jaggers bucked to get to his feet in the second. Sandro instantly wrapped his arms into the arm triangle, cinching it against the ring post. Rather than submitting, Jaggers (9-5) staggered forward, fell asleep and forced referee Samio Kimura to stop the bout 2:57 into the second period.

Tournament action did not end there.

Shintaro Ishiwatari and Chan Sung Jung threw caution to the wind in the “Fight of the Night,” as they went tit for tat on the feet.

“The Korean Zombie” pressed forward, firing a steady stream of punches that smashed into Ishiwatari; a big left dropped him early. Ishiwatari (6-2-3) quickly recovered, as he bucked off Jung in the side mount crucifix and threw his own punches and a grazing high kick. Unfazed, Jung pressed forward with more punches, wounded his Japanese foe and forced him to surrender his back. From there, Jung (3-0) sunk the rear-naked choke for the finish 4:29 into the first round. 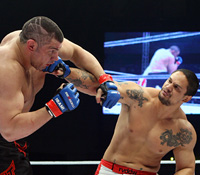 Dropping Kawahara with a big high kick in the opening minute, Denis (7-0) turned it on with knees to the body and followed with a flurry of punches that floored Kawahara (6-2) again a minute later. On the ground, Denis unleashed a barrage of hammerfists and backed them up with brutal knees to the right side of Kawahara’s head. Denis resumed punching soon after, but the referee had seen enough and jumped in for the save 2:36 into the match.

Other fighters who advanced in the featherweight draw included Masanori Kanehara -- a unanimous decision winner over Jong Man Kim -- and Ronnie Mann -- who outpointed Tetsuya Yamada in a unanimous decision. Kanehara (12-5-5) has won back-to-back fights for the first time since 2007. Mann (17-1-1) has rattled off five wins in a row.

Finally, heavyweight James Thompson did not deviate from his usual modus operandi of charging in on his opponent, but his typical tenacity worked against him and opened him up for “Big” Jim York’s counterpunches.

Despite momentarily rocking York (10-2) halfway through the bout, Thompson (14-10) was knocked down twice by York’s punches, the second of which was a stiff left that dizzied him enough for referee Tomoki Matsumiya to step in for the stoppage 4:33 into the opening round.