TOKYO -- It was upsets and surprises galore at Saturday’s Sengoku Sixth Battle inside the Super Saitama Arena.

In the main event, Satoru Kitaoka bested former Deep lightweight champion Kazunori Yokota with grappling superiority to take the lightweight tournament. Not wanting anything to do with Yokota’s striking, Kitaoka ducked under every flurry, settling into a predictable pattern of shooting for the takedown to counter Yokota’s standup.

Yokota defended by scrambling for the ropes, giving up his back in order to lean against or completely out of them to wait out the inevitable referee call for a break. Yokota only received a warning for his antics, but that didn’t stop him from using the ring posts to same effect for the rest of the bout.

“I wasn’t very happy with the breaks, and I thought that referee Samio Kimura wasn’t particularly fair to me, but we have to abide by rules and officials. No way around it,” said Kitaoka.

Yokota was able to punch Kitaoka’s face when his opponent went for the takedown, but was abruptly cut short whenever he was sucked down to the canvas. The end of the second round saw Kitaoka in such an instance, pounding on Yokota with short hammerfists from the side mount, punches from the knee on belly position, and finally foot stomps.

With the third round looking to be no different from the previous two, Kitaoka closed the bout with a surprising hook that dropped Yokota at fight’s end.

“I was like, ‘Wow! I got him with that?’ It wasn’t in my training, so it surprised me,” said Kitaoka of the punch.

All three judges ruled the bout in favor of Kitaoka, at which point the ground technician broke out into animated celebration. 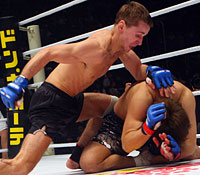 Daniel Herbertson/Sherdog.com
Takanori Gomi was overwelmed
by Sergey Golyaev.
“Although you lost tonight Mr. Gomi, I look forward to facing you,” Kitaoka then addressed the former Pride champion and the crowd.

A visibly upset Gomi stepped up into the ring then, congratulating Kitaoka at first on his tournament win, followed by a challenge.

“Let’s get at it. You better bring it. I’ll be waiting for you in this ring come January 4,” he said.

In the middleweight tournament, Jorge Santiago pulled off another big tournament win by taking out Kazuhiro Nakamura in the finals. Nakamura was ahead on the cards thanks to his lunging jabs, takedowns, and top control in the first two rounds.

In the third period, the 2007 Strikeforce middleweight tournament champion tagged Nakamura with a stiff jab, and immediately followed with a hammering right hook to the jaw that had the judoka dazed. Santiago charged in to finish, racking up a barrage of brutal punches to the face of the grounded Nakamura for the 49-second stoppage.

Takanori Gomi’s stock tumbles yet again with a decision loss to Sergey Golyaev in what was supposed to be a showcase bout for “the Fireball Kid.” As Gomi himself predicted, he had difficulty negotiating the lanky Russian’s length, unable to get close enough to score strikes of his own. Golyaev’s speed aided him in racking up points, along with a second-round left hook counter that crumpled the Japanese fighter in an awkward heap and appeared to cause damage to his right knee.

Golyaev swarmed on the dizzied Japanese fighter but was unable to finish him before Gomi recovered to finish out the round. Behind on the cards, Gomi aggressively pursued Golyaev in the third, swinging wide and missing. As such, two judges saw fit to award the bout to Golyaev, with only one giving the nod to Gomi.

“The next fight, there’s going to be a belt on the line. I feel like I’m the challenger for January’s show, so today’s loss was very good medicine for me,” said Gomi. “Kitaoka is a very tough matchup for me, because he’s so good at submissions.”

Golyaev, a member of the perennial Red Devil Team, earned his seat at the big show.

“A lot of people were saying that I was not as good a fighter as Gomi before the fight, so I’m very happy that I was able to exceed everyone’s expectations,” said Golyaev. 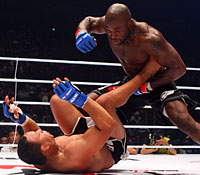 Daniel Herbertson/Sherdog.com
Mo Lawal continues
to impress.
Muhammed Lawal took a little longer with Fabio Silva than he did with veteran Travis Wiuff on Sept. 28, but his performance was no less dominant.

From the opening bell, Lawal shut the Chute Boxe fighter’s game down by taking him down and making sure he stayed there. Dropping heavy punches on the Brazilian throughout all rounds, Silva showed toughness in enduring the punishment, but little else. With no defense and no real way to reverse, the referee saved Silva during a particularly savage moment, calling the bout at 41 seconds in the third.

The light heavyweight bout between Antonio Rogerio Nogueira and Moise Rimbon saw the Pride veteran walk away the victor after three rounds of grappling control. Nogueira’s dogged takedowns and top control, coupled with a yellow card against Rimbon for rope grabbing, did not bode well for the Frenchman. As such, Nogueira took a technically sound, but largely uneventful unanimous decision.

Jorge Masvidal defeated Seung Hwan Bang in their lightweight tournament reserve bout. Stunning the Korean with a high knee followed by a barrage of punches, Masvidal easily took the first round, but played it conservative for the final two periods, countering the forward-pressing Bang with stiff jabs until the final bell. All three judges ruled the bout for Masvidal.

In the middleweight tournament reserve bout, UFC veteran Joe Doerksen trudged through three rounds to pound Izuru Takeuchi out for the TKO win. Though Takeuchi was ahead, Doerksen turned the tables by reversing Takeuchi to take mount in the third period, whereupon he sluggishly pounded on a defenseless Takeuchi before the referee called the bout at 4:13.

In the tournament’s semifinals, Kitaoka proved that foreigners aren’t the only ones he can tap in seconds by submitting Eiji Mitsuoka early in the first round. Refusing to touch gloves, Kitaoka apparently knew he would be in and out of the ring quickly. Kitaoka shot in early, picking up the sprawled Mitsuoka and putting him on his back, whereupon he took a leg and cinched the heelhook for the tap at 1:16.

Just moments prior, Yokota outpointed Mizuto Hirota to punch his ticket to the lightweight finals. Yokota proved too quick and elusive for Hirota, dodging his mile-wide hooks to counter with stinging jabs, one-twos, and low kicks. Controlling Hirota on the ground as well, Yokota won an overwhelming decision.

In the middleweight bracket, Nakamura had a drawn-out three round battle with Yuki Sasaki, taking the fight on the strength of his striking and two takedowns. From inside Sasaki’s guard, Nakamura pounded away, bloodying Sasaki up and winning all three judges’ votes to head into the middleweight finals.

Opening the show, Santiago made quick work of Siyar Bahadurzada, tapping him at 1:10 in the first round by heelhook. After the 183-pound Shooto champion slammed Santiago into the canvas, the American Top Team rep reversed, taking Bahadurzada’s back in the clinch. Santiago dropped immediately for the submission, and quickly got the tap.