Even in the Brazilian jiu-jitsu world, the UFC 94 main event between welterweight champion Georges St. Pierre and lightweight king B.J. Penn this Saturday at the MGM Grand Garden Arena in Las Vegas has sparked heated debate.

When they fought at UFC 58 three years ago in a match the French Canadian took by split decision, it was believed that Penn had a clear advantage on the ground. St. Pierre was thought to have a decided edge in conditioning. As they barrel towards their rematch, those lines seem far more blurred, as Penn vows to enter the cage in the best shape of his life and St. Pierre carries in his recently earned BJJ black belt.

Jefferson Teixeira -- the Gracie Barra jiu-jitsu instructor who helped St. Pierre train on multiple occasions in Brazil -- and Andre Pederneiras -- the Nova Uniao founder who has welcomed Penn to his academy hundreds of times since 1997 -- have different views on the UFC’s first superfight of 2009.

“I believe GSP will take some advantage standing up in the first rounds and then take him down and beat him on the ground,” Teixeira said.

“B.J. already exchanged punches with UFC light heavyweight contender Lyoto Machida and did not get knocked out,” he said. “He’s already beaten some of the best Brazilian [jiu-jitsu] black belts in his weight division. He also has amazing wrestling skills, so if B.J. is in good shape, I don’t see how he could lose this fight.”

Both instructors agree Penn and St. Pierre are blessed with extreme talent. However, their tunes change when discussion turns to the quality of their jiu-jitsu.

“I haven’t followed B.J.’s jiu-jitsu training, but I can say St. Pierre is in great shape,” Teixeira said. “The last time they fought, he was superior and won by decision. From what I saw here at Gracie Barra, I predict he will win again. Black belt for black belt, we cannot forget that GSP trains in the No. 1 jiu-jitsu academy in the world.” 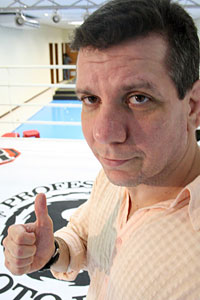 Marcelo Alonso/Sherdog.com
Pederneiras says there is a
"big difference between a black belt
and a world jiu-jitsu champion."
“Maybe Jefferson doesn’t remember that GSP was tapped out by [Nova Uniao’s top lightweight black belt] Leo Santos in less than one minute with a flying armbar in ADCC in 2005,” he said.

Pederneiras respects St. Pierre and even welcomed him into his academy the last time the UFC welterweight titleholder visited Brazil.

“I have nothing against GSP,” Pederneiras said. “Actually, he’s an amazing person who also trained with Wagnney Fabiano [the brother of the aforementioned Leo Santos] in Canada, so he’s welcome here, too. We have to remember that there’s a big difference between a black belt and a world jiu-jitsu champion. B.J. was the first non-Brazilian to get a gold medal in the black belt [division] in 2000, at a time when all the top guys competed in the event. His ground game is definitely above the average [black belt].”

Teixeira was impressed with St. Pierre’s growth in the 10 months between stops in Brazil. The 27-year-old St. Pierre was awarded his black belt by Gracie Barra’s Canada representative, Bruno Fernandes.

“I got really impressed by his amazing evolution, compared with the last time he came here as a brown belt in 2007,” Teixeira said. “He definitely deserved the black belt.”

“I saw he was a special athlete the first time he came to train in my academy with his brothers in ’97,” he said. “Even being a blue belt, he was so flexible that many of my black belts couldn’t pass his guard.”

Sometimes, that flexibility seemed to defy the bounds of believability.

“One time after training, he was reading a magazine with his legs crossed,” Pederneiras said. “He decided to scratch his ear with his foot and kept both hands holding the magazine. He’s definitely not an ordinary person.”