When Leomana Martinez stepped into the cage at Fury FC 39 last Saturday, it had been 372 days since his last fight. That would be a long layoff for any fighter, but for a 23-year-old veteran of just six professional fights, it seemed especially significant. Would the Fury Fighting Championship bantamweight champion be the same fighter as before? Had the division caught up to him, or even passed him by?

It took less than six minutes to put any concerns to rest. Facing undefeated challenger David Rivera, Martinez defended his title in emphatic fashion, rocking Rivera badly at the end of the first round before putting him away 51 seconds into the second with a final flurry of punches punctuated by a brutal left hook. Rivera was out cold, one leg folded underneath him like Mirko Filipovic after the immortal Gabriel Gonzaga head kick. As the belt was strapped around Martinez’s waist, the crowd chanted “UFC! UFC!”

The fight had a moment of controversy, as in the first round Rivera turned halfway away from Martinez after an exchange and gestured that he had taken a low blow. However, referee Patrick Patlan did not see anything that warranted a break, and Martinez continued his onslaught.

“If you watch the tape, I’m 99 percent sure that kick landed to the stomach. It might have ricocheted a tiny bit off the cup, but the referee was there and... I mean, defend yourself at all times,” Martinez said with a shrug.

Conversing with the now 6-1 Martinez backstage after the fight, it becomes clear that while his bantamweight title is secure once again, so is his status as a next-level prospect. Those who have been watching him fight know it, too; even in the growing, hyper-competitive and occasionally fractious Houston-area MMA scene, it’s hard to find someone who doesn’t like Martinez and wish him well. On this night, several fellow fighters ask to get a picture with him, including one 50-fight veteran and Rivera, the man he knocked out 30 minutes ago. Others simply want a handshake or fist bump and to congratulate him. 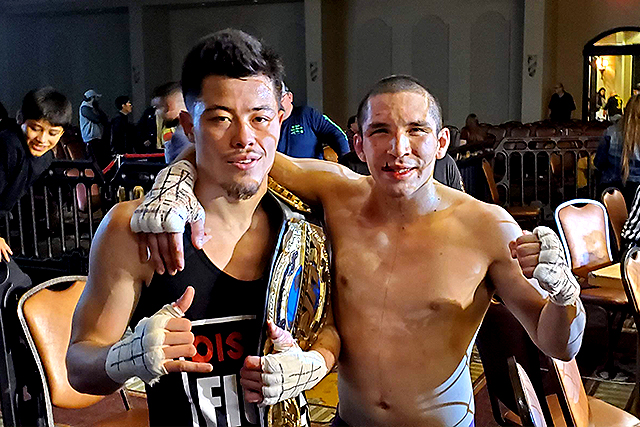 
Behind the selfie requests and well-wishes there seems to be pair of unspoken, but generally agreed-upon sentiments: One, “Manaboi” is a legitimately nice guy; and two, it may not be long before he’s gone from here and we’ll be watching him on television. The first of those two is inarguable, as Martinez brings a level of old-school politeness to interviews that is disarmingly sincere. Every answer is punctuated with sir.

The second question, of his future potential, is trickier. While the product of Bushi-Ban Martial Arts and Metro Fight Club is the brightest prospect in Houston, and perhaps even in Texas, he is only seven fights into his career and not yet a finished product. Even at this point, however, there are elements that make you sit up and take notice. Martinez is already a vicious, swarming finisher, in a way that many fighters never become no matter how long they fight. Additionally, his strikes carry power possessed by very few bantamweights at any level of the sport, and he can channel that power through a full arsenal of techniques.

He also displays a matter-of-fact seriousness about his career that bodes well for his future exploits. Asked why he weighed in at 133 for the fight, Martinez said, “I stepped on my scale before I left for weigh-ins, and I felt like I was right there, but my scale started acting up, saying 135, [then] 136. I’m a professional, so I decided to cut the extra pound or two, just to play it safe.”

Now that Martinez is back, he seems to display a different sense of urgency about his career. He claims not to begrudge the year away -- which he attributes to dental surgery, family affairs and an attempted champ vs. champ fight against then-Fury featherweight champion Colin Wright that fell through -- but may be looking to make up for lost time. The last time Martinez spoke to Sherdog, shortly after his last fight, he had not yet signed with professional management. That is no longer the case, as his affairs are now handled by Iridium Sports Agency. He recognizes that while the crowd’s invocation of the Ultimate Fighting Championship may not be an immediate reality, there are alternate routes to the big leagues -- Martinez’s lone career loss, a razor-close split decision to Dulani Perry three years ago, resulted in Perry getting a call to appear on “The Ultimate Fighter.” There is also Dana White's Contender Series, which has been a springboard to the UFC for Houston-area standouts such as Juan Adams and Domingo Pilarte.

“I would 100 percent jump at the opportunity to be on [Contender Series] at 135 or 145 pounds,” Martinez said. “Any opportunity to test myself and prove myself at the next level, yes sir.

“I’ve watched it a few times and it feels almost like this,” he added, gesturing to indicate the venue. “It’s not a huge arena, but it’s full of friends and family cheering for them, so it’s a similar atmosphere. I think I’d feel right at home.”

Whatever the next step is for Martinez, whether it’s a call up, another defense of his Fury belt or another cross-divisional superfight, it’s clear that he is eager for it to come. If he has anything to say about it, it will not be another year before he is in the cage again.

“I’m young, but I’m not getting any younger,” Martinez said. “While I’m young and my body is holding up, I want to compete as much as I can.”