ATLANTA -- Chuck Liddell, a man once thought to be nearly invincible, was forced to address the subject of retirement at the post-fight press conference for UFC 88 “Breakthrough” on Saturday at Philips Arena. So goes the plight of a 38-year-old one-punch knockout victim.

Liddell (21-6), on the backend of his decorated career, has dropped three of his last four bouts, the latest a brutal KO loss to Rashad Evans at UFC 88. Evans landed a lethal overhand right in the second round that stunned the crowd and left Liddell limp and unconscious. After he lay motionless in the center of the cage for several moments, questions arose about his future in a sport some feel has passed him by.


Advertisement
“I’ll definitely take a little time,” said Liddell, who turns 39 in three months. “I always said I’ll decide if I want to retire in the training room, not after a fight. I’m fine. I got caught. What do you want me to say?”

Never in his career had Liddell been finished so brutally. Still, the California native has designs on one day regaining the light heavyweight championship he once held for more than two years. His loss to Evans likely cost him an immediate shot at reigning 205-pound kingpin Forrest Griffin.

“It’s still my goal to get back in there [and win the title],” Liddell said, “but, obviously, it’s going to take a little bit longer.”

Evans parlayed his devastating knockout of Liddell into some extra cash, as he was awarded a $60,000 “Knockout of the Night” bonus by the UFC brass.

Based out of Jackson’s Submission Fighting in Albuquerque, N.M., Evans drew Liddell into his trap and sprang a right hand for the ages on the former champion 1:51 into the second round at UFC 88. According to Evans, it was all part of the plan.

“My [kickboxing] coach, Mike Winkeljohn, went over that overhand right over and over again,” Evans said. “He said, ‘Man, this is the one that’s going to put Chuck down.’ He said it was going to hit, and it hit. It happened just the way he said it would happen.”

Evans was not the only fighter to fatten his bank account with bonus money.

Canadian veteran Jason MacDonald was awarded a $60,000 bonus for “Submission of the Night” after he coaxed a tapout from former World Extreme Cagefighting champion Jason Lambert with a second-round rear naked choke. MacDonald was the first man in almost seven years to submit Lambert, who had not tapped out since he dropped a November 2001 bout to Marco Ruas.

Meanwhile, lightweights Kurt Pellegrino and Thiago Tavares picked up matching $60,000 bonuses for “Fight of the Night” after they engaged in a spirited three-round war. Pellegrino tore into Tavares early, as he knocked down the talented Brazilian twice in the first round en route to a unanimous decision. 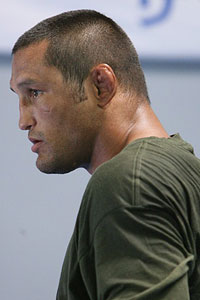 Dave Mandel/Sherdog.com
Dan Henderson claimed his first
victory inside the Octagon in
more than a decade at UFC 88.
Henderson Ends Decade-Long Drought

Dan Henderson won inside the Octagon for the first time since May 15, 1998, on Saturday, as he outdueled the skilled Rousimar Palhares in a unanimous decision at UFC 88. In fact, 3,767 days had passed between UFC victories for the 38-year-old two-time Olympian.

“It doesn’t feel bad, that’s for sure,” Henderson said. “I haven’t had a win in the Octagon in about 10 years. Somebody brought that up to me [Saturday]. Hopefully, I don’t wait that long again.”

Henderson’s last UFC victory prior to his conquering Palhares came in a unanimous decision against Allan Goes at UFC 17. Bill Clinton was still in the White House, “Deep Impact” was number one at the box office and reigning UFC welterweight champion Georges St. Pierre was four days shy of his 17th birthday.

The win also snapped a two-fight losing streak for Henderson, who had dropped back-to-back bouts to Quinton “Rampage” Jackson and Anderson Silva. His match with Palhares was his first non-title affair since October 2006.

Two notable winning streaks were broken at UFC 88. Danish kickboxer Martin Kampmann had rattled off nine consecutive victories before he succumbed to first-round strikes against Nathan Marquardt, and Palhares had won five straight before he dropped a unanimous decision to Henderson … UFC 88 “Breakthrough” drew 14,736 fans to Philips Arena, resulting in the second-highest gate -- $2.6 million -- in that venue’s history. Only Barbara Streisand wielded more box office muscle at the home of the NBA’s Atlanta Hawks and NHL’s Atlanta Thrashers … Evans’ last six opponents -- Liddell, Michael Bisping, Tito Ortiz, Sean Salmon, Lambert and Stephan Bonnar -- have combined for 100 wins between them … Seven of the nine betting favorites at UFC 88 were victorious; only Liddell and Tavares were bitten by the upset bug.
Related Articles
Latest News
ALLUFCBELLATORPFLONE