HELSINKI, Finland -- On paper, the 25th installment of the premier mixed martial arts promotion in Finland, Fight Festival, offered a diverse dish for the MMA connoisseur. On the menu were UFC veterans, fights that could be billed as grudge matches and even the inaugural women’s MMA bout. Lo and behold, the hype was answered with a full plate on Saturday at TÃ¶Ã¶lÃ¶n Kisahalli.

The main event meal was a middleweight bout between Sean Salmon and Lucio Linhares.

Stateside, Salmon is known for his UFC loss to Rashad Evans, but coming into his latest appearance, the crowd recognized him as the man who defeated the most popular fighter in Finnish MMA, Mikko Rupponen, in 2007.

Linhares, a Brazilian submission master, has become Finland’s adopted son after dedicating years to the Finnish fight scene. He has evolved a diverse skill set competing in many local events and the M-1 Challenge series, and once again, he quickly put his skills to use.

The clearly taller and lankier Linhares (11-4) opened with a well connecting cross, which seemed to put Salmon instantly in trouble. He quickly scrambled to get the fight on the ground. Linhares got out from under the stockier wrestler and soon delivered a takedown of his own, much do the delight of the roaring crowd. From there, Linhares went to work by mixing ground-and-pound and improving positions, eventually gaining the back mount and a rear-naked choke.

Salmon (15-7) fought the submission for a while but was eventually forced to tap 2:07 into round one. The audience blew the roof off as the bearded man nicknamed “Spartan” took a clear stance on his current nationality via his trademarked war cry “This ... is ... Finland!”

“The plan originally was to pull a half guard and work for a sweep from there, but on the first exchange, I felt that I [was] the better striker and committed for that,” Linhares said. “Once it went to the ground, I didn’t feel pressured by his wrestling; the ground is my world. After the M-1 [show] in February, I became sick as I started to train for Salmon. Mikko Suvanto just kicked my ass horribly in training, but I feel that my stand-up has improved a lot.”

Salmon, who has lost two straight by submission, admitted he was stunned by Linhares’ opening shot.

“I didn’t see the punch coming,” Salmon said. “My knees went wobbly. I had a really good training camp. Obviously, I’m disappointed. I’m now 1-1 in Finland. I would really like a rubber match.”

The show’s one disappointment was the cancellation of an intriguing matchup between two UFC veterans. Canadian Victor Valimaki was supposed to move down a weight class to face Bulgarian middleweight Jordan Radev. However, Valimaki failed to make the 84-kilogram weight limit. A suggested catchweight bout, with some of Valimaki’s purse going to Radev, was refused by the Bulgarian camp. Eventually, the fight was called off.

“I had a nagging injury, and this was my first time attempting middleweight,” Valimaki said. “It got to the point where I was sitting in [a] sauna and not sweating at all. I’m still going to go to middleweight, and I absolutely hope that I’ll be able to fight in Finland again soon. I feel I owe it to the people here.” 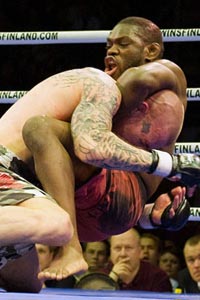 Puhakka (14-8) had success in the first round, as he connected with crisp punching and stuffed most takedowns attempts. Casimir fought back with a more relentless style of striking and actively looked for submissions from his back. Come round two, Puhakka was still outwrestling Casimir, until a scramble ended with the Finn on his back. From there, Puhakka created some space and turned for a double-leg, but Casimir (18-5-2) showed great submission instincts and locked in a deep guillotine choke in mid-flight. Puhakka was forced to surrender, granting Casimir his 12th submission victory 1:35 into the second period.

Anton Kuivanen got some payback from Casimir’s teammate, Alexandre Abin.

Kuivanen (9-4) was nothing but explosive, as he opened the fight nonchalantly with a flying knee. After demonstrating a good base and balance in nullifying Abin’s wrestling, Kuivanen connected again with a more traditional approach, quickly mounted his opponent and knocked him out cold with strikes from the top. The end came 2:30 into the opening round. Abin (3-3) has lost two of three.

Elsewhere, striker Outi Louhimo made both her professional MMA debut and Fight Festival history when she defeated Ukraine’s Ekaterina Tarnavskaja by technical knockout 3:48 into the first round. Her calm striking throughout the fight eventually forced Tarnavskaja (0-1) to risk a desperate takedown attempt, which resulted in Louhimo (1-0) securing a mounted advantage and making the most of it.

Meanwhile, the previously unbeaten Marc Cofer was en route to wrestling a clear victory from Patrick Vallee when the Frenchman’s knee cut open a huge gash on his eyebrow and forced the fight to be stopped 4:49 into the match. The defeat snapped a three-fight winning streak for Cofer (3-1). Vallee improved to 1-1-1 (1 NC).