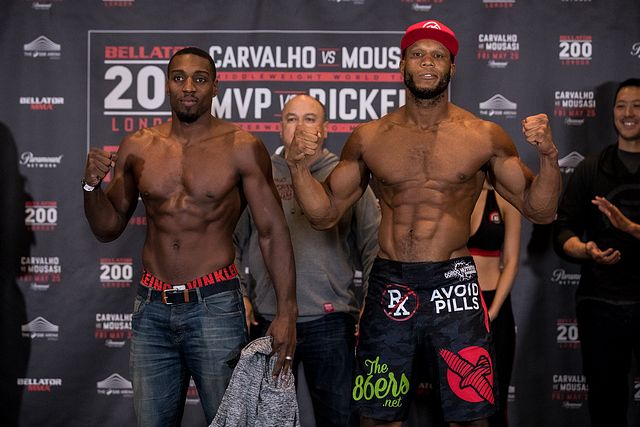 Phil Davis and Linton Vassell weigh in for their match at Bellator 200 (Image: Bellator MMA)


DAZN is the exclusive streaming partner of Bellator MMA. You can sign up for a free trial here.

Linton Vassell is a very big guy. One need only look at a couple of weigh-in photos of the burly, 6-foot-4-inch Brit standing alongside “normal” light heavyweights to appreciate this reality. Speaking to Sherdog.com ahead of his bout with Valentin Moldavsky at Bellator 218 this weekend -- his debut at heavyweight -- Vassell exudes a palpable sense of relief. It isn’t difficult to conclude that making the 205-pound divisional limit must have been taxing for Vassell, a fact he readily acknowledges. In fact, he claims his decision to move up in weight was made even before his last fight, a third-round TKO loss to Phil Davis at Bellator 200 last May.

“I had a bad weight cut going into the Phil Davis fight, and I was just like ‘I’m over this,’” Vassell said. “Win or lose, I was going to move up. I’d had quite enough of cutting that weight. I’d usually walk around weighing about 240, and then kind of pre-cut to about 225 to try and make it not such a hard [water] cut, and I’d just gotten over it. I was like, ‘Just let me eat and enjoy it and fight as a heavyweight now.’”

More than a mere loosening of the belt, Vassell claims that the move to heavyweight changes his entire approach to fight preparation. “Now I get to be a proper heavyweight, rather than a heavyweight trying to be a light heavyweight,” he said. “I get to eat, drink, train like a heavyweight. I can enjoy a good meal, eat pretty much what I want. Before, talking to you a week away from a fight, I’d be eating a little plate of vegetables or something. Now I can have carbs again!

“I’ve always sparred and trained with heavyweights as well as light heavyweights, so that hasn’t changed,” he added. “What’s changed is that I don’t have to do the extra running. You know, I’d get home from training and go, ‘Oh, I’m a little over, so I’ve got to go running.’ I think I used to overtrain a lot, because you’ve already trained, and instead of getting to recover, you’d have to go back out and do more work to get the weight off.”

When the 35-year-old Vassell steps into the cage this weekend, it will have been 10 months since his last fight. While the time off allowed him to make a smooth transition to heavyweight -- he estimates he will weigh a fit 245 to 250 pounds on Friday -- he maintains it was not by choice. Asked whether the layoff was due to a wish for time off, or perhaps some nagging injury, Vassell expressed his frustration at being on the shelf as well as his excitement to get back to work.

“No, Bellator just didn’t match me up!” Vassell exclaimed. “They said I was going to fight in October or November, but then it didn’t happen. I was going to be on the Hawaii card [Bellator 212/213 in December], but that didn’t happen. There were a bunch of different reasons, but here we are now and I’m finally getting back in there.”

Of his opponent when he gets back in there, Moldavsky, Vassell says, “I’ve seen several of his fights on the internet. He’s some sambo guy, a heavy hitter. He’s 7-1. He’s going to bring it, and he’s tough, but I’m ready. I’ve fought tougher guys. A fight’s a fight, at the end of the day. I’m ready. Seriously, come March 22, I’m ready to kill.”

Assuming he comes through the fight victorious and relatively undamaged, Vassell is eager for a quick turnaround. Though he claims he is a young 35 physically, never having had a serious injury, and feels energized now that he is free of the grueling cut to light heavyweight, there is a sense that he wishes to make up for lost time. Vassell aims to fight three times this year -- something he claims would have been impossible at light heavyweight -- and ideally would like to fight next at Bellator MMA’s visit to London in June. Even though Vassell has spent the last three and a half years living in Florida, where he trains at Hard Knocks 365, the man from Milton Keynes, England still gets a thrill from fighting in his native country.

“I love fighting back home,” Vassell said. “You’re the home team, it’s your homeland, your home country shouting for you, there’s something about it. It just gives you goose bumps [and] an adrenaline rush.”

If Vassell fulfills his wish to fight three times at heavyweight this year, three wins would almost certainly put him at or near a title shot. Bellator’s heavyweight division is notably aging, full of fighters who have already fought one another, and desperate for new faces. The face waiting for Vassell in that theoretical title shot might be a familiar one, as Ryan Bader won the Bellator heavyweight grand prix, and the divisional title, in January. Vassell challenged Bader for the light heavyweight title back at Bellator 186 in November 2017, losing by second-round TKO. Asked whether he feels a rematch at heavyweight would go differently, Vassell answered without hesitation.

“I’d look forward to that fight,” Vassell added. “But first I’ve got Valentin, and I’ve probably got a couple of fights before I could fight Bader again anyway. So Valentin’s the one in front of me, I’ve got to deal with him, then it’s on to the next one.”