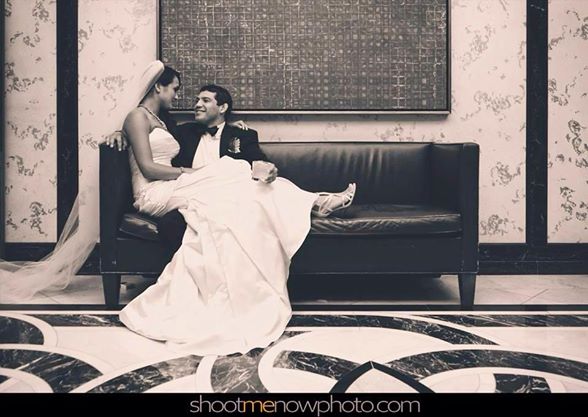 
Editor’s Note: This is the first installment in an ongoing series spotlighting the spouses of professional mixed martial artists.

With 2004 drawing to a close, Keri Anne, then 22 years old, left junior college in Los Angeles to return home to San Francisco. She was done with basketball, her sport of choice. However, the lifelong athlete was not comfortable sitting idly while by waitressing at Outback Steakhouse, so she sought a new endeavor after cousins implored her to try Thai boxing. Kerri Anne ventured out to the Inner Sunset District, where renowned standup gym World Team USA offered a free cardio kickboxing class. Trainers promptly shifted her into standard muay Thai technique courses. Training for five or six months led to competition.

“Back then, we called it smokers,” she told Sherdog.com from inside the office at the El Nino Training Center, a 7,000-square-foot family business that brandishes her husband Gilbert Melendez’s fighting moniker in the Potrero Hill District. It has been nearly a decade since Keri Anne first stepped into the ring, and “smokers” -- unregulated, in-gym exhibitions -- have largely gone by the wayside around these parts. She won roughly 10 smokers in 2005 before posting a 4-1 amateur record. That solid year developing her standup skills led her to the punch that would change her life.


A friend asked Keri Anne if she knew of Melendez, a mixed martial artist that trained at rival muay Thai gym Fairtex. MMA was not as prominent then, and she was not very interested.

"No,” she said to her friend, recalling the scene with a laugh. “He must suck. Who is that?”

Mutual friends introduced Keri Anne and Melendez for a group date. A passion for marital arts was not the only common interest that brought them together out the gate -- tequila did, too. They both enjoyed margaritas. Taylor and friends went to drop off Melendez at home as the night winded down. The Shooto veteran decided to get fresh with his date.

“He wasn’t going to get anywhere, so he was like, ‘You can't punch,’” Keri Anne remembered.

Keri Anne decided to show the soon-to-be Strikeforce lightweight champion how deceptive looks could be: “I punched him in the eye.”

It was a right hand at the end of a combination that caught Melendez’s attention. Despite the gag, Keri Anne liked that he did not have an ego. He was respectful, a “sweet guy” with serious training ethics, and she knew she could learn a lot from him. Their connection was solidified with that first strike. One of the first things she learned: Melendez did not, in fact, suck.

“My first fight that I saw Gilbert fight was Clay Guida,” she said, pointing to the bout in which Melendez captured the Strikeforce lightweight championship in June 2006. “I was like, ‘Woah, this guy is good. He’s a beast.’” 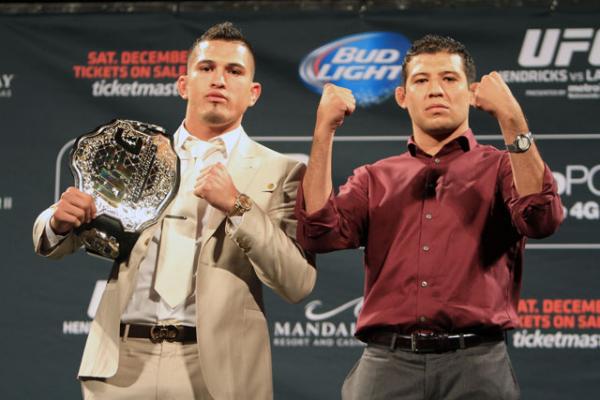 Photo: Jeff Sherwood/Sherdog.com
Melendez’s eyes are on UFC gold.
Still new to MMA, Keri Anne did not understand everything that was going on in the firefight between Melendez and Guida, but she was wise enough to know the Chicagoan latching onto Melendez’s back was a real threat.

“It was like, ‘Oh, he took his back; he’s done,’” she said. “Gilbert just spiked him on his head, hula-hooped him around.”

Melendez won the title that night, and “El Nino” has not been without Keri Anne in his proverbial corner ever since.

Approaching the end of 2006, Keri Anne accepted her first pro muay Thai bout. Her opponent had a real experience advantage on her: She guesses 20 to 30 boxing contests and a verified, unblemished 10-0 kickboxing record. Keri Anne told Melendez, “I’m going to fight this girl Jeri Sitzes.” He looked up her opponent and asked, “Oh, you are? For your first fight?”

“What’s the problem?” Kerri Anne replied. She remembers he was not nervous, but her confidence surprised him. “Yeah, I’m gonna win,” she said. “I’m gonna do good.”

Kerri Anne took four fights in Chuck Norris’ short-lived World Combat League, amassing a 3-1 record in that standup fighting organization. As her time there ended, Melendez’s career as a lynchpin star for Strikeforce was in full-swing. He opened a modest gym in the Bayview District on the embattled outskirts of San Francisco. Keri Anne became a key figure in running the gym business, which at the time felt like an invite-only spot, so Melendez could focus on fighting.

As Melendez solidified his championship career in Strikeforce, expanded into Pride Fighting Championships and then landed on Showtime and CBS with Strikeforce, the business grew significantly enough to warrant a move to the upgraded Potrero Hill location.

She has moved her pro muay Thai record to 2-1 since losing her debut. Kerri Anne still wants to compete, but right now, Melendez’s fighting career takes precedence. The 32-year-old will challenge Anthony Pettis for the Ultimate Fighting Championship lightweight title in the UFC 181 co-main event on Saturday at the Mandalay Bay Events Center in Las Vegas. Kerri Anne also has other important responsibilities occupying her time.

In the summer of 2010, she and Melendez welcomed their daughter, Leylakay, to the world. Keri Anne finally added Melendez to her name when the two wed in 2013. Months before the wedding, Melendez transitioned from Strikeforce champion to challenging Benson Henderson for UFC gold, coming up short in his initial Octagon title bid on April 20, 2013. Keri Anne has been with Melendez for each of his three defeats.

“From the start, I knew what I was getting into, and I loved it,” she said when asked about marrying a fighter.

Kerri Anne stands by Melendez as a support system, noting on some level that she knows what he goes through because she has fought herself. Upon further reflection, she honestly could not imagine balancing all his pressures ahead of the meeting with the 27-year-old Pettis.

“He’s doing a great job handling all these boiling pots,” she said. “I took over the gym from the beginning, thank goodness, because I don’t know how he could do that, be an analyst, train the way he does, keep all these relationships, be a good business man and train to fight like this.”

When they were younger and not parents, she found Melendez’s fighting exciting and cool, not worrisome. The situation has changed.

“I get so worried, it’s crazy,” she said. “I would never not want him to do it. This has been his passion. Hell no, I’m doing it. He’s not going to tell me not to do it. Now there’s a lot on the line. I do feel more emotional and a little bit worried, just because anything can happen in a fight -- anything. As much as he can be prepared 5,000 percent, anything can happen with those little gloves.”

Keri Anne believes Melendez was over-trained for his first go at the UFC title. His camp lasted four months, and she estimates he peaked three weeks early. The family remains proud of his performance against Henderson, even though it did not earn him the distinction of being a UFC champion. There were additional pressures due to the threat of getting cut, taking a pay cut or simply not performing well upon his highly anticipated debut. Against Pettis, Keri Anne feels the pressure is somewhat less. Melendez has a good contract in hand, and there are no Octagon jitters to consider. She does not provide any other details but simply offers that Melendez is looking to finish Pettis and bring the gold back to San Francisco.

Roughly a month ago, Melendez’s daughter, Laylakay, now 4, participated in her first wrestling class, followed by her first gi jiu-jitsu class at the El Nino Training Center. Father and daughter can be found doing handstand wall walks together. The gym and martial arts represent a healthy lifestyle to which they are dedicated; it is indeed a family affair. Laylakay was born into it and has been quick to pick up on her father’s needs, rest being chief among them.

When Laylakay sees ads for her Melendez’s upcoming title fight on TV, she yells, “Boo, Anthony Pettis!” The first time she did so, Melendez asked his wife, “Why did you teach her that?” Keri Anne responded: “I didn’t teach her that.” Like in fighting, some things in family come natural.

Danny Acosta is a freelance writer that has written for FOX Sports and Maxim Magazine, among others. He can be heard weekly on the Sirius XM Fight Club for the “Acosta KO” segment (Sirius XM 92 Tuesdays 5 p.m. ET/2 p.m. PT) and on his podcast Majority Draw Radio on iTunes and MMAweekly.com.