Anybody who had watched Mississauga, Ontario’s Mark Bocek fight in his previous three UFC appearances might not have recognized the man who defeated Alvin Robinson at UFC 91 on Nov. 15 in Las Vegas. In his win over Douglas Evans and his losses to Frankie Edgar and Mac Danzig, Bocek (6-2) had looked to be a decent, but not particularly noteworthy fighter –- he certainly didn’t show the promise that was expected of him when he was dominating everyone in Canada.

But in his impressive victory over Robinson (9-4), Bocek, now 2-2 in the UFC, looks to have made drastic leaps ahead in several key areas. Bocek controlled Robinson for almost the entire duration of the fight, and his clinch work, wrestling, and ground-and-pound seemed much improved. Bocek attributed it all to the six weeks he spent preparing at American Top Team in Coconut Creek, Fla.

“That’s the camp with me for sure,” said the Nova Uniao black belt. “They’re great at making jiu-jitsu guys fighters, and me coming from a jiu-jitsu background, it’s a great fit. I had guys in there pushing me every day, and I knew that 99 percent of the guys I trained with would have beaten my opponent.”

Bocek was also exposed to strength and conditioning coach Andre Benkei, someone who may have had the most impact on his future career.

“Benkei helped me out tremendously with strength and conditioning in general, and diet, supplementation and weight cutting,” said Bocek. “I owe a lot to him.”

Bocek said that until he met Benkei, the only thing he knew about cutting weight was what he found on the Internet, and that his previous approach was to basically starve himself for the three weeks leading up to his fights.

“I didn’t really understand weight-cutting and it was affecting my training,” he said. “I’d be starving myself and I didn’t have the energy to train. It is what it is. It’s not an excuse, I just thought everybody was doing that, but apparently they’re not. I felt like a new fighter.”

Bocek, who’ll take some time off during the holidays, hopes to return to the cage in late January or February. He said that he wouldn’t mind tangling with Joe Lauzon or Aaron Riley next, but then he wants another crack at Edgar and Danzig.

“I think I’m starting to show what I’m capable of, and now I’d like to even show it against a higher caliber type of opponent,” said Bocek.

Kalib Starnes (9-3-1) took the first step back to reinvigorating his career when he defeated Chris Cisneros (8-5) at the inaugural event for the Destiny MMA promotion on Nov. 15 in Honolulu, Hawaii. This was the Surrey native’s first bout since his decision loss to Nate Quarry at UFC 83 in April. As good as it was to win, Cisneros was a late replacement for the bigger-named Kala “Kolohe” Hose, who withdrew two days before the event over some type of contract disagreement. 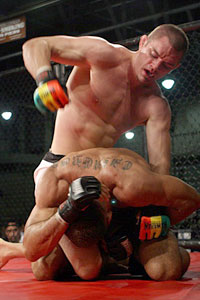 James Meinhardt/Sherdog.com
Kalib Starnes lays a
beating on Chris Cisneros.
Starnes said that he was traveling to the press conference a day before the weigh-ins when Hose’s manager called in an attempt to renegotiate the rounds from five to three minutes. Starnes said that he agreed, only to have Hose’s camp then ask the promoters for more money. However, when the money was sorted out it was revealed that Hose had a leg injury and couldn’t fight.

“Once all of his demands were met he still didn’t fight,” said Starnes. “No professional MMA fights are three-minute rounds, that’s ridiculous. But I agreed to three, three-minute rounds and he still didn’t fight, so what does that tell you there? He never mentioned any injury to anybody, and that to me sounds like a way to legally get out of a contract that he signed.

“If he was really injured that’s terrible,” Starnes continued. “But it was two days before the fight and he said the injury happened weeks before, and he never mentioned it to anybody until right when he was trying to renegotiate for more money and shorter rounds.”

Starnes was frustrated, as he prepared specifically for Hose and thought it would have been a good matchup.

“He [Hose] seemed like a good guy –- I’m sure it was just some kind of business dealings, and it sounded more like managers negotiating on his behalf trying to look out for his best interests,” said Starnes. “I know that maybe if he was looking for a fight in the UFC he might be a little worried about fighting me.”

“But in the end it seemed like we were willing to bend but they wouldn’t play,” Bolos told Sherdog.com.

Despite the change in opponent, Starnes said the trip was fruitful.

“Chris was a good fighter and tough and willing to take a fight like that on short notice with me, so I respect him a lot,” he said. “And he was a really good guy –- all those guys from Hilo were cool people and it was a nice trip.”

Back in British Columbia where he continues to train with Andy Suitela and Andrew Pedersen, Starnes said he is currently seeking new management.

One interesting tidbit of information to come out of the UFC 91 post-fight press conference on Nov. 15 was President Dana White’s response to a reporter’s question: “Will GSP or BJ [Penn] fight Anderson Silva after this fight?”

St. Pierre’s aspirations to eventually move up to middleweight were first revealed in an interview between his manager Shari Spencer and Sherdog.com last year.

"He wants to leave a legacy," Spencer had told Sherdog.com. "He wants to be the most dominant fighter the UFC and MMA has ever seen, and he intends to accomplish that by dominating the 170-pound weight class, moving up to the 185 weight class and then eventually the light heavyweight class."

If St. Pierre accomplishes the daunting task of defeating Penn and then Silva, there will be little room left for argument as to who takes the pound-for-pound mantle.

The main event for KOTC has Kelowna, British Columbia’s Rory MacDonald (6-0) putting his Canadian lightweight title on the line against the KOTC world titleholder Clay French (16-3). MacDonald’s last fight was a year ago when he won the championship in a gritty three-round performance against Kajan Johnson.

The third event on offer this weekend went through a bit of a shuffle though.

If anybody thinks that being an MMA promoter is easy, they should ask Phoenix Fight Promotions’ Scott MacLean. In the past two weeks, PFP has lost UFC veterans Carmelo Marrero and Richie Hightower to injury, forcing MacLean to do what many promoters are forced to do -- scramble to find suitable last-minute replacements.

Marrero was scheduled to meet Ryan Jimmo, but the American Top Team light heavyweight sustained an injury in his WEC bout against Steve Steinbeiss on Nov. 5. TUF veteran Hightower broke his hand in training last week as well.

MacLean then thought he had tough Albertan Jared Kilkenny for Jimmo, but he too got hurt.

The only one of the three original marquee fights that remains will be a welterweight clash between Jason MacKay and Drew Fickett.

“It’s frustrating from a marketing perspective,” MacLean said. “We tried to hype up the fact that we had a lot of UFC vets on the card, but at the end of the day I’m satisfied with the quality of the opponents that we’ve brought in.”

MacLean was able to secure the services of Beau Baker (4-0), who will face local star TJ Grant (12-2). However, Robert Beraun (7-6), who was scheduled to take on Jimmo (8-1) at a catch weight of 215 pounds, was dropped after the Nova Scotia Boxing Commission called Beraun’s local Arizona Commission and was told he was medically suspended following his loss to former UFC heavyweight champion Ricco Rodriguez on Nov. 8. Beraun was unaware of the suspension, according to the promotion.

At press time, former world kickboxing champion Rick Roufus (4-4) had agreed in principle to face Jimmo at a catch weight of 210 pounds.

“I think the fights are actually closer than what they originally were,” said MacLean. “I think the TJ Grant-Beau Baker fight is higher quality now then it would have been even with Richie Hightower.”

Also on the card: