Canadian middleweight Denis Kang has confirmed to Sherdog.com that he has signed a four-fight contract with the UFC. One of the world’s most coveted free agents, Kang said that he has dreamt of fighting in the sport’s top organization for a long time.

“Do you want to hear a funny story?” asked Kang. “Back in 1995-96 I was telling all of my friends that I’d be fighting in the UFC within a year. I don’t want to say that anybody could get in the UFC back then, but it was more what kind of martial art you did instead of your record.”

Kang notes that the UFC and the sport have evolved substantially since his high school days, but he feels he has the goods to make a dent in the promotion.

Kang (31-10-1) is coming off of a brutally quick TKO victory over Marvin Eastman at RAW Combat on Oct. 25 in Calgary, Alberta, and once went three years and 23 fights without losing.

When Kang fought in Pride Fighting Championships there was one thing that he envied about his friends who fought in the UFC.

“When I was fighting in Pride I was proud to be a Pride fighter and I loved it,” recalled Kang. “I felt like I was really part of the Pride family, but the only thing I envied the UFC fighters was that people could watch them live and go to their fights. I can tell you that if I hadn’t been fighting for Pride, the UFC would have been my other choice.”

Now that choice has come to fruition and Kang is ecstatic.

“It feels great man,” said Kang. “It’s brought me a new level of focus and motivation even higher because now I know I’ve got some work to do. It reminds me of when I first signed with a big league in Japan -– I was like this is serious now and I’ve got to get my shit together.”

Kang said that he has told the UFC he will be ready for inclusion on one of their fight cards in January, and if he had his druthers he’d love to be on the UFC 94 Super Bowl weekend roster on Jan. 31 alongside friend and training partner Georges St. Pierre, who will be taking on nemesis B.J. Penn.

Kang will be leaving for Montreal on Wednesday to continue training with St. Pierre and strength and conditioning coach Jonathan Chaimberg. Other than a brief Christmas visit to Vancouver, he’ll remain in Montreal until UFC 94.

Kang joins a deep pool of middleweight contenders, many of which have already tried and failed to unseat champion Anderson Silva from his throne.

With so many possible opponents to face, Kang says politically that he doesn’t care who his first foe will be, but he knows who he doesn’t want it to be –- friend and former training partner Jason MacDonald.

“Oh man, I hope it’s not Jay-Mac,” said Kang. “He’s one of my good buddies and we’ve been training partners. I hope that we meet later on in the rankings if we even meet at all.”

Facing Silva is a different story though.

“I think that I’ve got everything that it takes,” said Kang. “He’s on fire right now and he’s awesome, but I think that I can rise to the challenge and I definitely want a crack at being the champion of the UFC –- that would be a huge honor for me.”

Kang will need to get cracking out of the gate. Silva has publicly stated he will retire from competition after his five remaining fights on his UFC contract are completed. Kang is not worried. 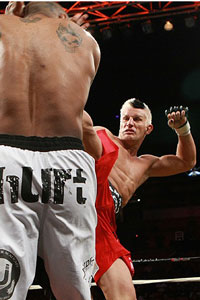 “I’m super excited and really looking forward to this fight,” says Alessio. “This is very important for my career and it’s important for me to keep winning. Daley is a great opponent who is very athletic with good striking. It’s also great to return to Canada to fight in my home country.”

Alessio had been in negotiations to sign a multi-fight deal with EliteXC, but with the demise of parent company Pro Elite, that avenue has closed.

Daley told Sherdog.com last week that he had numerous offers to consider following the Oct. 20 announcement of Pro Elite’s collapse. Daley had two fights remaining on his EliteXC contract, and said he was unsure of the “legal jargon” within the agreement. Apparently, Daley is set to move on though.

“The good thing with John is that he’s always had a pretty open book with all of the organizations.” Tompkins said. “He’s had over forty fights and is on a huge win streak, so he’ll be placed somewhere else that will work out well for him.”

With power promotion TKO’s uncertain future looming over the Canadian MMA scene, there are several organizations that seem ready to fill the void, and one is Phoenix Fight Promotions.

Based in Dartmouth, Nova Scotia, PFP is headed by Scott MacLean, a former member of the Canadian Navy and owner and trainer for FitPlus, one of the regions two premiere fight teams. MacLean’s goal for PFP is a simple one.

“I want to give Canadian fighters an avenue to fair fights and to get them ready for the bigger shows, and to give Maritime fans the opportunity to see UFC-caliber fights at home,” he says.

Before Jimmo and MacKay face this challenge, however, they each must face different opponents at XMMA 6 in Montreal this weekend. Jimmo, a TUF 8 semi-finalist, is set to clash with Jesse Forbes (7-2) and MacKay will be taking on Steve Claveau (7-7-1).

Jimmo said that he’s very aware of how important these next two fights are for his career.

“These two fights are the ones that Scott and I have planned, and I have to beat people that the UFC have their eyes on so I can break into that bigger sea again,” he says. “They’re pretty crucial, so I have to make sure I win.”

MacLean and Jimmo think that both fights are winnable with the proper strategy.

“If Jesse chooses to stand with me I’m going to knock him out, and if it does go to the ground I think I’m going to grind out a decision,” says Jimmo.

Jimmo and MacKay aren’t alone in their busy schedules though, as Marrero and Fickett each have a fight between now and Phoenix as well. Marrero will be meeting Steve Steinbeiss (4-1) on Nov. 5 at WEC 36, and Fickett will take on Jose Cortez (4-1) on Nov. 8 at RITC 117.

Another likely beneficiary to a possible TKO demise is XMMA. Founded by UFC vet David Loiseau –- who made his name in TKO and its earlier UCC incarnation -- and partner Steve Claveau, the Montreal-based organization will host its sixth event this Saturday at the Colisée de Laval in Montreal.

XMMA 6 will include a battle for the promotion’s lightweight championship between Samuel Guillet and Kajan Johnson, along with these other bouts: