Denis Kang (Pictures) set out from his home in Vancouver, British Columbia Monday on a twelve-hour flight to South Korea, where he’ll defend his Spirit MC middleweight title against Jae Young Kim (Pictures) this weekend. Kang has dropped his last two bouts, first from a shocking knockout punch from Yoshihiro Akiyama (Pictures) at K-1 Hero’s last October, and then to a slick triangle choke applied by Gegard Mousasi (Pictures) in the opening round of the Dream 2 Middleweight Grand Prix in April.

Needless to say, Kang has a reason to be eager.

“All the hard work is done; the only thing left to do is kick his ass,” said Kang. “I know my last two fights weren’t what anybody expected, but I think for awhile I was just kind of lagging in training and lost my concentration. I don’t know what to call it, you know? I wasn’t depressed or anything like that, it’s just the focus of my motivation was misplaced. I wasn’t training like I am now to try to improve myself and be the best –- I was just going through the motions basically.”

This ennui could have come from the Kang’s separation from his American Top Team comrades in Florida due to visa issues. Kang told Sherdog.com that he expects his P1 visa, also known as an “Athlete’s Visa,” to arrive soon, and that he’ll then head back south for training.

The 30-year-old fighter was also introduced to strength and conditioning coach Jonathan Chaimberg, whom Kang credits with his recent improvement.

“I love working with him and I really notice the difference with his training with my explosiveness and overall endurance,” said Kang.

Kang and opponent Kim are no strangers to each other. They already fought each other twice, with Kang emerging victorious on both occasions with a combined time of 2:16, so this should be a good chance to get in a morale-boosting win.

On the final fight of his current contract, Kang said he is on the verge of re-signing a new one- to two-year contract with Korea’s most successful MMA promotion. The Korean-born French-Canadian has enormous popularity in his native country, which is starting to spill over into his second home of Canada.

Following his Spirit MC bout, Kang is scheduled to fight Marvin Eastman (Pictures) at Raw Combat on Oct. 25 in Calgary, Alberta –- the first time he’ll be competing on home soil since he defeated Chris Peak in 2003.

The UFC announced last week that Canadian Sam Stout (Pictures) (13-4-1) has been added to their Oct. 18 UFC 89 roster in Birmingham, England, where he’ll take on local draw Terry Etim (Pictures) (10-2). Both fighters prefer to stand and bang, but the pair also shares something else in common –- a loss to Rich Clementi (Pictures) in their last appearances in the Octagon.

“I don’t know what the whole idea behind that was or what they’re [UFC] trying to do there,” said Stout of the matchmaking. “It works for me though -- it’s going to be fireworks for sure.”

Stout was also quick to point out that while both he and Etim lost to Clementi, the Canadian’s loss was by split decision while Etim’s was unanimous.

The Oct. 18 bout should also be less pressure for the lightweight from London, Ontario, who found that fighting in front of his family and friends in Canada at UFC 83 in April was a double-edged sword.

“As exciting as it was to fight in Montreal, I almost enjoy getting away somewhere remote like England where I don’t have the same distractions,” said Stout. “I was getting so much attention and there were a ton of people trying to call me and get tickets, and it was the first time that all of my friends and family showed up.” 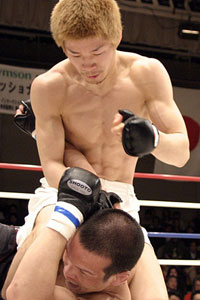 Hatsu Hioki (Pictures) (15-3-2) will be returning to Montreal to defend his featherweight title against Thierry Quenneville (Pictures) (12-7) at TKO 35 on Oct. 3 at the Bell Centre in Montreal. Hioki, who currently sits at #8 on Sherdog.com’s featherweight rankings, won the TKO belt in a gritty five-round majority decision over Mark Hominick (Pictures) in February 2007.

Quenneville’s most recent victory came over Ben Greer (Pictures) at TKO 34 in June, though Hioki will certainly be considered a step up in competition for the Canadian.

“I can't wait to test my skills against a guy who has been in the big show,” Hague told Sherdog.com. “One thing for sure, if it turns into a war I'll be leaving my heart in the ring. I don't think it will be a war though.”

For Hague’s sake, let’s hope the bout goes through without a hitch. Since his knockout victory over Jeff Lundberg in June, Hague’s last two scheduled fights have fallen through. Opponent Josh Strickland was injured in the hours leading up to their matchup in July in Edmonton. On a nicer note, Hague was unable to fight for East Coast Fight Productions this month due to the birth of his first child.

• Maximum Fighting Championship’s recent signee David Heath (Pictures) (9-3) will face Emanuel Newton (Pictures) (9-3-1) in his promotional debut at MFC 18 “Famous” on Sept. 26 at the River Cree Resort and Casino in Enoch, Alberta. The bout will likely be a No. 1 contender match to determine a challenger for the MFC world light heavyweight belt currently held by Halifax’s Roger Hollett (Pictures).

• Edmonton’s MFC appears to be on a signing spree lately, with numerous well-known fighters joining their stables in the past few weeks. They include David Heath (Pictures), Roger Hollett (Pictures), Simon Marini, LaVerne Clark (Pictures), and Calgary native Josh Russell, who has just inked a three-fight deal.

While still a rookie to professional MMA, Russell has been hovering on the outskirts for years. The first-ever Canadian Gracie Barra Jiu-Jitsu black belt, Russell is the longtime friend and BJJ coach to Jason MacDonald (Pictures). Russell went 3-0 in amateur MMA in 2000.

Russell will be making his debut as a welterweight at MFC 18 “Famous” on Sept. 26 against Mike Gates (Pictures), and will drop to lightweight thereafter.