SEINÃ„JOKI, Finland -- The area of Botnia is known in Finland as a place where real red-meat-eating men still roam free.

The going got even more real Saturday when 20 professional MMA fighters from Finland and abroad roamed to Botnia Punishment VII.

Headlining the event was a rare gem. Lightweights Joni Salovaara of Espoon KehÃ¤hait and Pasi Maliniemi from MMA Lappeenranta fought for the vacant Botnia Punishment championship, the only professional MMA title in Finland. Both men gave a showing worthy of the championship ramifications.

Salovaara, an up-and-comer, started the bout as expected, light on his feet and vying for dominance with crisp punch combinations. Maliniemi, the more experienced fighter of the two, answered with sharp counterpunches, making Salovaara change levels for a takedown. In the ensuing scramble it was Maliniemi who eventually got the fight to the ground by jumping on Salovaara's back and sinking in a rear-naked choke.

Salovaara fought the choke calmly, but once he escaped, Maliniemi had a barrage of other solid submission attempts ready. Salovaara amazingly cleared them all, and near the end of the round finally scored the takedown he had been looking for. Maliniemi then quickly found himself on the business end of a brabo choke, only for the bell to halt the high-paced round.

Despite the pace, both men looked fresh going into the second with Maliniemi instantly shooting. Salovaara pulled out every trick in the book in fighting the attempt, showing great use of the cage and excellent balance. 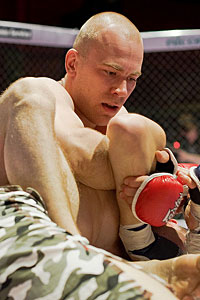 Heikki Hujala/Sherdog.com
Maliniemi looked for several
submissions against Salovaara.
The following moments saw both men go through a nonstop barrage of scrambles and formidable submission attempts, including Maliniemi’s own brabo, which ended again with Salovaara deep in an ankle lock. The young man was visibly in pain, but gutted it out and managed to pull himself to the safety of the guard.

With the bout deemed a two-rounder, it was time for the scorecards. The judges awarded the win to Maliniemi, but the torching-hot crowd gave a huge ovation to both fighters.

“I was looking to use my hands more, but they were pretty spent after all the submission attempts,” said Maliniemi, the newly crowned champion. “The pace we were going was really fast. But that didn't surprise me. I know that Joni is a fighter who brings it. With the last ankle lock, I heard his tendons pop, and he went on.”

Hometown favorites Jarkko LatomÃ¤ki and Mathias Klockars pleased the audience by defeating their opponents hastily. LatomÃ¤ki, a reputed ground-and-pounder, surprised everyone by using his wrestling for a smooth armbar from the top, tapping out ranked German opponent Cengiz Dana 1:48 in the first round.

A kickboxing phenomenon who is arguably the most talented striker in Finnish MMA, Klockars showcased his explosive striking early on but seemed to be in trouble once taken down by Germany's Onur Bozkurt. Klockars quickly proved the doubters wrong by applying an equally explosive triangle choke at 2:50 of the first round, showing that the striker has dangerously evolved.

A rematch was served between Olli-Jaakko Uitto and Ville RÃ¤sÃ¤nen. In their amateur career, RÃ¤sÃ¤nen had decisioned Uitto, but now Uitto was quick to lock in an armbar. RÃ¤sÃ¤nen attempted every counter imaginable, not forgetting some slams, but eventually was forced to tap out at 3:27.

At lightweight, Joni Haahka cleared an early guillotine from Latvian opponent Michael Zabaev. Haahka then proceeded to give a textbook example on how to mount, pound and choke someone out, ending the class with a rear-naked choke at 4:28.

Tuomo Turkia gave another example of the same category, choking Latvia's Alexandr Shebeko after 1:54. The last rear-naked choke was applied by Shahin Alem of Sweden at 2:37 of the first round after he had recouped from a near-knockout by Juho Kalliomaa.