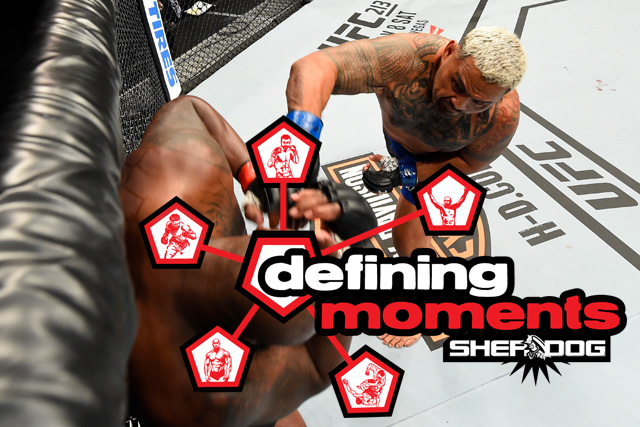 Longtime Pride Fighting Championships veteran and former K-1 World Grand Prix winner Mark Hunt has been a staple of the UFC’s heavyweight division since 2010. The 44-year-old Kiwi will meet submission specialist Alexey Oleynik in the UFC Fight Night 136 main event this Saturday at Olimpiysky Arena in Moscow, where he seeks his first victory in more than a year.

In a career replete with defining moments, here are five that stand out as Hunt approaches his showdown with “The Boa Constrictor”:


Hunt locked horns with the incomparable Wanderlei Silva on New Year’s Eve in 2004, as he battled the Brazilian juggernaut at Pride Shockwave 2004 in Saitama, Japan. Hunt outweighed “The Axe Murderer” by 72 pounds, but despite their differences on the scale, it was widely expected that Silva -- he was unbeaten in his previous 18 appearances -- would emerge victorious. The memorable clash featured three Hunt knockdowns, all from punches, and his immortalized “atomic butt drop” on the Chute Boxe star. The pathologically violent Silva had his moments, but Hunt was awarded a split decision, the win proving he could be a force to be reckoned with in MMA.


At Pride Critical Countdown Absolute on July 1, 2006, Hunt squared off against former Ultimate Fighting Championship heavyweight titleholder Josh Barnett. Hunt entered the match full of confidence, courtesy of a five-fight winning streak. However, the granite-fisted standup specialist was exposed by Barnett, a catch wrestling aficionado who refused to allow “The Super Samoan” the necessary space to cut loose with power punches. After scoring an early takedown, Barnett transitioned to side control and secured a kimura, forcing Hunt’s submission 2:02 into Round 1.


Hunt was on a six-fight losing streak when he faced Chris Tuchscherer in his second Ultimate Fighting Championship appearance at UFC 127 on Feb. 27, 2011. Many saw the former collegiate wrestler as an unfavorable stylistic matchup for Hunt. However, a noticeably slimmer Hunt had made significant improvements to his takedown defense and easily denied the American’s increasingly desperate attempts to drag him to the mat. When Tuchscherer bent down in a bid for a double-leg takedown early in the second round, Hunt connected with a devastating uppercut that left his opponent to flounder on the canvas. “The Super Samoan” turned and walked away before referee John Sharp intervened, the win marking the start of an unlikely resurgence.

4. Wrong Side of the Highlight Reel


“The Super Samoan” on May 25, 2013 marched into his UFC 160 pairing with Junior dos Santos on the strength of a four-fight winning streak. Hunt’s renowned toughness was on full display in their co-main event, as he absorbed significant punishment from the mobile Brazilian while on his feet. Dos Santos ended proceedings abruptly 4:18 into Round 3, where he landed a perfectly timed spinning hook kick to Hunt’s head and authored one of the most spectacular knockouts in UFC history.


Hunt headlined UFC Fight Night 85 in his adopted homeland on March 19, 2016 in Brisbane, Australia. His opponent was former heavyweight champion and esteemed Brazilian jiu-jitsu black belt Frank Mir. The evolution in Hunt’s takedown defense was apparent yet again, as he effortlessly denied Mir’s attempts to get the action to the floor. Just over three minutes into Round 1, Hunt finished the contest with a right cross to the side of Mir’s head and put another signature victory in the books.