LEMOORE, Calif. -- Doug Marshall eked out a split decision over Jaime Jara in the middleweight main event of PFC 13 “Validation” at The Tachi Palace Hotel and Casino.

Marshall and Jara, veterans of the WEC and ShoXC respectively, put on a three-round barn burner, but it was Marshall’s striking that out-pointed Jara’s grappling and clinch domination.

The fight lingered almost entirely in the clinch, with Jara hunting unsuccessfully for a takedown. Marshall, a former WEC champion, attempted to create distance and swing for the fences.

Although the crowd seemed to rally behind the bloodied and beaten Jara at the bout’s conclusion, a winded and exhausted Marshall thanked the crowd, then called out local favorite Phil Collins. Marshall bested Collins via second-round TKO at PFC 9 last July.

In the co-main event, undefeated Kyle Pimental took the PFC welterweight crown from champion Olaf Alfonso in his first title defense with a third-round doctor’s stoppage.

Pimental and the always tough Alfonso put on the fight of the night, as the pair went for broke from the opening bell. However, Alfonso proved to be no real threat for his challenger. Pimental dominated the bout from start to finish, and came close to victory in the second round. Alfonso’s resilience kept him alive until the third.

Pimental worked effective ground-and-pound until referee Cecil Peoples stepped in so the doctor could check a cut on Alfonso’s nose. The bout was stopped at 2:48.

Eddie Yagin shocked the crowd by making short work of local hero Casey Olson, flooring The Pit protégé with an overhand right en route to a guillotine choke submission at 1:16 into the first round. 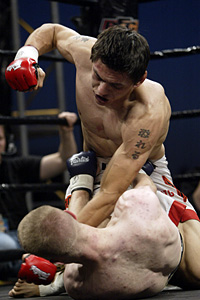 WEC veteran Carlo Prater defeated Dominique Robinson for the vacant 155-pound strap. Prater earned scores of 49-46 on all three cards in a five-round bout that saw neither fighter take much damage.

Prater thanked the crowd and offered Robinson an immediate rematch.

The first round ended in controversy, with MacDonald tapping to an armbar at the bell. Referee Jason McCoy did not see the tap, and the fight continued into the second round. It hardly mattered. Escovedo dominated the second set, finishing MacDonald with punches from the mount at 2:25.

Pat Runez became the PFC’s 125-pound champion in impressive fashion, as he had little trouble with the tough but overmatched Anthony Perales.

Runez controlled the first round, both standing and on the mat, before locking in the belt-winning rear-naked choke at 2:28 of the second round. Runez improves to a perfect 6-0, and has contender Raamba Somdet in his sights.

“Raamba, if you’re coming back… I want that fight,” Runez told the crowd.

Bryan Travers cemented his place as a contender in the PFC’s lightweight division, taking every round on the judges cards’ over much more experienced IFL veteran John Gunderson.

The victory marked Travers’ 155-pound debut; he had previously held the PFC’s welterweight strap before giving it up to make a run in the lighter division.

Erin Toughill used superior striking and an effective push kick to earn a unanimous decision win over an outmatched Emily Thompson. Thompson was game, but could not get any offense going against the American Gladiators’ star.

Gabe Ruediger, notorious for his weight-cutting issues and love of chocolate cake on Spike TV’s “ The Ultimate Fighter,” wowed the crowd, needing only 1:03 to submit hometown fighter Darren Crisp with a guillotine choke. Reudiger looks to be a new force in the PFC’s 155 ranks.

Scott McAfee and Bill Theofanopoulos came out swinging for the fences, and McAfee ended the bout with a ferocious left hook just 43 seconds into the second round.