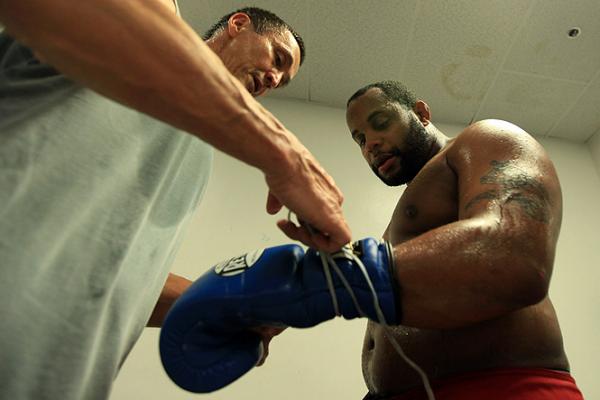 And to think, some had urged Daniel Cormier to consider a move to 205 pounds.

Cormier cemented his place as one of the sport’s elite big men with a one-sided shellacking of former UFC champion Josh Barnett in the Strikeforce heavyweight grand prix final on Saturday at the HP Pavilion in San Jose, Calif. The latest in a long line of gems spawned by the American Kickboxing Academy, he carried the scorecards by 50-45, 50-45 and 49-46 counts on the strength of heavy power punches and kicks, well-timed takedowns and punishing ground-and-pound.

By the end of the 25-minute encounter, Barnett had cuts all over his face, and MMA had been introduced to a brand new heavyweight star.

A late bloomer at 33, Cormier’s next outing figures to come inside the hallowed Octagon of the Ultimate Fighting Championship. Though the timeline for such a move revolves around the health of his surgically repaired hand, the UFC figures to throw Cormier right into the fire. With Alistair Overeem shelved, Brock Lesnar retired and Junior dos Santos looking the part of a dominant champion, the heavyweight division could certainly use a fresh face.

Shane Carwin, provided he can return from back surgery, would serve as a difficult first UFC hurdle for Cormier. While he lacks the speed, athleticism and technique of those atop the heavyweight division, the hulking Coloradan wields as much raw punching power as anyone in the sport. Plus, he has proven he can absorb as much punishment as he doles out. From Cormier’s standpoint, a convincing victory over Carwin could send him to the front of a short line of title contenders.

In wake of Strikeforce “Barnett vs. Cormier,” here are four other matches we want to see made:

Josh Barnett vs. Fabricio Werdum: Despite his checkered past, Barnett belongs in the UFC. The 34-year-old put up an admirable fight against Cormier, even though he was outgunned on the feet and on the ground. There can be a no more hopeless position for a mixed martial artist, yet Barnett battled through the pain and inevitability that accompanies such a defeat. He remains one of the sport’s finest heavyweights and can add depth, quality and personality to a division needs all three. Fabricio Werdum will collide with Mike Russow at UFC 147 next month in Brazil. Win or lose, “Vai Cavalo” seems an ideal dance partner for Barnett’s first UFC bout in a decade.

Gilbert Melendez vs. Pat Healy: Melendez has scaled every mountain Strikeforce has to offer, from Mitsuhiro Ishida and Jorge Masvidal to Shinya Aoki and Tatsuya Kawajiri. The 30-year-old Californian likely closed the book on his memorable rivalry with Josh Thomson, as he defended the lightweight crown and walked away from their rubber match with a split decision. Melendez has now won seven fights in a row and, after besting Thomson for a second time, sounded very much like a man who has grown bored with his surroundings. If Melendez remains under Strikeforce employ through the end of 2012, matchmakers will have a difficult time selling anyone as a legitimate threat to his reign. Once viewed as little more than a tough-as-nails journeyman, Healy has had to have moved to the top of their list with consecutive wins over Lyle Beerbohm, Eric Wisely, Maximo Blanco and Caros Fodor.

Josh Thomson vs. Jorge Masvidal: Considering all the injuries Thomson has endured and overcome throughout his career, one has to wonder how much he has left to give. As talented as any lightweight in the world, the 33-year-old American Kickboxing Academy export put forth a valiant effort in pushing Melendez to his outermost limits. As long as he can keep himself active and healthy, Thomson will remain a valuable commodity. In a career that now spans more than a decade, he has been finished only once -- by the immortalized flying head kick from Yves Edwards at UFC 49 -- and has never lost back-to-back fights. Masvidal, a strong kickboxer with excellent takedown defense, went the distance with Melendez in a losing effort in December. That makes him an obvious candidate to face Thomson next.

Rafael Cavalcante vs. Gegard Mousasi: Cavalcante exacted some serious revenge on Mike Kyle, as he answered the American Kickboxing Academy’s second-round technical knockout in 2009 with a 33-second submission in their rematch. “Feijao” blasted Kyle with a knee, followed him into the cage, swarmed him with punches and cinched a fighting-ending guillotine choke when he attempted to stand on wobbly feet. It was over in a little more than half a minute. The Strikeforce light heavyweight championship has remained vacant since Dan Henderson departed for the UFC a year ago. Throw Cavalcante and the gifted but enigmatic Mousasi in the cage with one another, and let their fists decide who fills the vacancy.