With two rousing title bouts, Saturday’s Strikeforce “Diaz vs. Cyborg” event moved along some key storylines in the promotion.

When you’re the clearly-defined second banana in a market defined by a behemoth rival, fault tolerances are at a minimum. Big upsets in the UFC merely create new rivalries and plot lines; in Strikeforce and smaller promotions, they can imperil matchups vital to the health of the product.

Yet to its credit, Strikeforce continues to match fighters tough and make the most of out of what they have. Here’ s a closer look at five fights we’d like to see after tonight’s action.

In submitting Evangelista “Cyborg” Santos in the second round, Diaz defended his Strikeforce welterweight belt in classic fashion. The Stockton-based battler gave Cyborg the kind of fight the challenger needed, forcing confrontations, eating a ton of nasty leg kicks, and offering exchanges. In a thrilling opening round, it appeared that Diaz might be in for an unexpectedly tougher night, especially considering their skill sets. Cyborg, once a light-heavyweight, was landing some solid shots and giving the champ a tough scrap.

Then, suddenly, in what will rank as one of the worst tactical decisions of the year – along with Robbie Lawler’s decision to jump into Ronaldo “Jacare” Souza’s guard after stunning him earlier in the card -- Santos took Diaz down in the second, and was promptly armbarred. It may have been inevitable, as the pressure Diaz puts on opponents exerts a kind of bleed rate that runs them out of gas, and options, and Cyborg seemed to be tiling in that direction anyways.

That’s why Daley is a fascinating opponent for Diaz. The Briton is a destructive striker, possessing the kind of one-punch, concussive power that can scramble anyone’s senses.

Diaz’ willingness to stand with anyone, along with Daley’s ability to bang and resist takedowns (at least against less than elite wrestlers, which Diaz is not), makes this a natural matchup. Diaz has shown a gameness to force exchanges and let opponents unload and exhaust themselves in the intricate standup game; he looks like he’s getting beaten when really he’s just wearing you down. Against Daley, he’s have to absorb some nuclear-grade punches to implement that game plan. And knowing Diaz, he’d be willing to risk it.

Diaz probably has the best chin in the sport. Daley would certainly test it, and given Diaz’ wiring, it’d be a compelling tactical question for him if he got into trouble against Daley. Because in recent fights, Nick has shown little inclination to force fights to the ground early -- “Semtex” might force him to do just that. What makes Diaz so fun to watch is that he is amazing on the ground, yet is willing to trade punches to entertain fans. And he seems to enjoy breaking people making them slug with him.

Santos was surprisingly competitive with Diaz, and played the part of game challenger prior to his tactical Waterloo. Given Woodley’s blend of potential, and his performance against Tarec Saffiedine, Santos would be a perfect next opponent if he wants a title shot.

That’s because the talented Woodley, while gaining a decision of Saffiedine, largely negated Tarec’s skills while eeking out a takedown-based decision. Santos presented the allure of a threat against Diaz, and style-wise, Woodley would probably be able to handle him and look exciting while winning.

Woodley is exceptionally gifted and the next in line for a title shot against Diaz (Or Daley) and he’ll need a benchmark-style win to make such a bout marketable. Santos would oblige him, and Woodley would probably deliver the goods.

Style-wise, over five rounds, I’d probably lean toward Diaz right now. But give Woodley another fight and a few more months to round out his game, and that’s one heck of a welterweight title fight. This is the match to build it and help him progress on the necessary fronts. 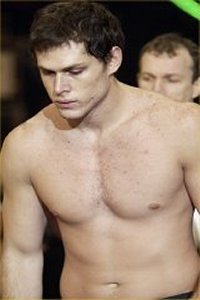 File Photo
Gracie is special on the ground.
Given Strikeforce’s shallow talent pool at light heavyweight, and Gracie’s masterful showing against Trevor Prangley, it is tempting to match Gracie against someone else. Perhaps Rhadi Ferguson (another grappling wizard turned MMA fighter). But realistically, the world’s best grappler (no-gi and submission circuit, thank you), looked fantastic in dominating the usually-durable Prangley.

With a mere four bouts under his belt, Gracie has defeated pretty solid competition, and with Dan Henderson and Rafael “Feijao” Cavalcante squaring off for the Strikeforce light 205-pound title in March, Gracie could benefit from more seasoning and exposure. Sobral is a name opponent and the perfect stylistic foil; at this point, Gracie’s ground game applies to MMA so well that the best template for beating him is a huge striker with great takedown defense, which Sobral isn’t. Keep him busy, keep him winning, and good things will happen.

Great grapplers have often had middling results transitioning into MMA. With Gracie as the world’s unquestioned best, “Jacare” is a close second. What makes him a different breed is, despite being Brazilian, he has solid takedowns and willing standup. Souza’s win over Robbie Lawler was a masterpiece of positional tenacity and resilience.

After getting wobbled in the opening round, Souza rebounded with his grappling brilliance, and dominated the second, threatening with a litany of submissions. Lawler, rarely put on his back, escaped a series of sub attempts with admirable tactical awareness; it became clear that the fight had dwindled down to Jacare’s submissions vs. Lawler’s big strikes.

In the third, Souza scored a takedown early, and Lawler expressed disgust once planted to the mat. It was the look of a man knowing his fate. Souza quickly secured the back, then a rear-naked choke, for the win.

Strikeforce’s middleweight ranks are thin, with Souza holding wins over both Kennedy and Miller. However, you have to make do with what you’ve got, and Souza could use the winner of Miller/Kennedy, scheduled for March 5. Either opponent would be a solid foil for him, as his win over the dangerous Lawler showed a resilience and grounding to his game.

Herschel Walker vs. Someone with A Recent Win

In KO’ing Scott Carson, Walker defeated an opponent who hadn’t won since June 2001.

Strikeforce faces a weird conundrum in matching Walker, milking his marketability versus derailing the gravy train too soon, and Carson was decidedly on the safe side of the risk factor. I’m not saying they should throw him in against a hardened veteran, but this kind of card appeal eventually forces a decision.

Maybe someone who has had a win recently and given someone a tough fight. Walker’s a great story. Let’s move it along, as his inclusion on further Strikeforce cards begs for tougher questions to be asked.