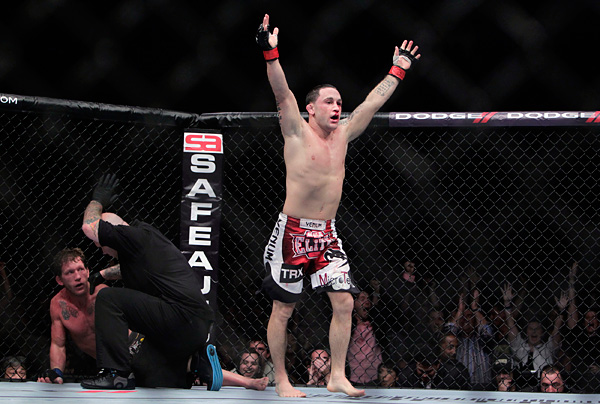 
For the second time in 10 months, Frankie Edgar brought Rocky Balboa to life in the cage.

Showcasing his astounding ability to absorb and recover from punishment, Edgar retained his lightweight championship with a scintillating fourth-round knockout against the previously unbeaten Gray Maynard in the UFC 136 headliner on Saturday at the Toyota Center in Houston. A series of brutal but exact punches -- a right uppercut, straight right, right hook and follow-up lefts on the ground -- brought a decisive conclusion to their lightweight trilogy 3:54 into round four.

Edgar (14-1-1, 9-1-1 UFC) had only once previously in the UFC finished a fight with strikes. Despite repeated calls for a move to 145 pounds by the few detractors who remain, the 29-year-old Toms River, N.J., native has solidified his hold on the lightweight throne and cemented his place among the game’s top pound-for-pound fighters. Now clear of the considerable hurdle Maynard represented, Edgar has almost limitless options at 155 pounds, especially with the eventual arrival of Strikeforce champion Gilbert Melendez.

Frankie Edgar vs. Clay Guida-Ben Henderson winner: Edgar will need time to mend from the beating he absorbed in the first round, where an encounter with a Maynard uppercut nearly turned out the lights and subsequent run-ins with the challenger’s hands and knees left him battered and bloodied. Still, he again called upon his amazing recuperative quality, found his rhythm and put together a beautiful striking sequence that wiped out Maynard in the fourth round. It seems safe to assume that Edgar will be favored against most anyone in the lightweight division moving forward. Guida and Henderson will do battle at UFC on Fox 1 on Nov. 12. The winner figures to be first in line for the next crack at the man they call “The Answer.”

Chael Sonnen vs. Anderson Silva: They are polar opposites in terms of style and approach. In August 2010, the first encounter between Silva and his would-be foil exposed the vulnerabilities in the Brazilian titleholder’s game, showcased his resilience and revealed the weaknesses that have kept Sonnen from becoming a champion at the highest level. The challenger dominated for four-plus rounds before he allowed himself to sink too low in Silva’s guard and found himself trapped in a submission from which he could not escape. Nothing that has happened in the 14 months since has quenched the thirst for a rematch, and Sonnen’s blowout of Brian Stann made it all but a certainty. 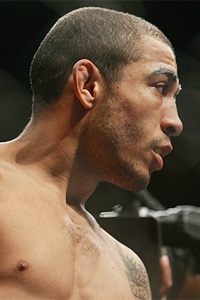 Jose Aldo File Photo
Aldo has considerable firepower.
Jose Aldo vs. Chad Mendes: Perhaps showing the toll of his weight cut to 145 pounds, Aldo has looked less than dynamic in two title fights against Mark Hominick and Kenny Florian. The unbeaten Mendes, though still raw, could test the Brazilian champion’s bottom game with his takedowns and top control, provided he can wade through Aldo’s considerable firepower on the feet.

Gray Maynard vs. Guida-Henderson loser: Though he will likely not see another title shot as long as Edgar reigns, Maynard will not fall far from the top of the lightweight division. A showdown with the loser of the Guida-Henderson matchup at UFC on Fox 1 next month seems apropos considering the current states of their respective careers.

Kenny Florian vs. Mark Hominick-Chan Sung Jung winner: Have we seen the last of Florian as a title contender? Perhaps. At 35, he has failed in three bids to secure UFC gold.

Nevertheless, he has plenty of meaningful fights ahead of him, so long as he wants to pursue them. Florian’s well-rounded skills can serve as a valuable litmus test for would-be contenders, and his propensity for finishing fights makes him a natural for the limelight. Hominick and Jung will slug it out at UFC 140 in December, with the winner surfacing in a pool of contenders at 145 pounds. Florian would provide a proper gauge of the victor’s viability.

Joe Lauzon vs. Gleison Tibau-Rafael dos Anjos winner: Lauzon’s chances against the wildly talented Melvin Guillard supposedly fell somewhere between slim and none. Yet, “The Ultimate Fighter” Season 5 alum beat Guillard at his own game, wounding him while the two stood before following him to the canvas to finish off the upset with a rear-naked choke in 47 seconds. With that, Guillard lost his seat at the lightweight contender’s table. Largely an afterthought in the wake of his losses to Sam Stout and George Sotiropolous, the 27-year-old Lauzon has made himself a player again at 155 pounds. American Top Team’s Tibau will collide with the surging Dos Anjos at UFC 139 on Nov. 19. Give Lauzon the winner.

Demian Maia vs. Alan Belcher: Few can match Maia on the mat. However, he left himself open to power punches in his win over former Sengoku Raiden Championship middleweight titleholder Jorge Santiago. A stouter striker -- Belcher fits the mold -- might have exposed those holes, much like Nate Marquardt did at UFC 102.

Anthony Pettis vs. Nate Diaz: Imagine the potential fireworks between these two. Pettis displayed another dimension in his growing game in outwrestling Jeremy Stephens. Diaz, who smashed former Pride Fighting Championships titleholder Takanori Gomi at UFC 135, is an emerging threat at 155 pounds and only knows one gear in the cage.

Brian Stann vs. Michael Bisping-Jason Miller loser: Stann’s stock figures to take a significant dive after being undressed by Sonnen. The former WEC champion had no answer for Sonnen’s takedowns or his top game, ultimately succumbing to a second-round arm-triangle choke. Stann has plenty of tools but needs more work if he plans on becoming a legitimate contender at 185 pounds. Bisping and Miller will lock horns at “The Ultimate Fighter 12” Finale in December following their coaching stint on the Spike TV reality series. The winner will move toward the top half of the UFC middleweight division. The loser might find Stann on the rebound.

Melvin Guillard vs. Dennis Siver-Donald Cerrone loser: No one lost more at UFC 136 than Guillard. Believed to be on the cusp of title contention, those hopes vanished in less than a minute. Such was the cost of his ill-fated encounter with Lauzon. With that said, Guillard’s physical ability remains undeniable, and, at 28, he has plenty of productive years ahead of him, though it remains to be seen what kind of psychological toll his latest defeat will take on him. His next assignment could arise from the Siver-Cerrone matchup at UFC 137 in a matter of weeks.

Nam Phan vs. Michihiro Omigawa-Jason Young winner: Victory was undoubtedly sweet for Phan, who righted one of last year’s most glaring wrongs with a unanimous decision over Leonard Garcia. His fast hands, experience and ability to take a punch make him a handful for almost any lower- to middle-tier UFC featherweight. Let him have a go at the survivor of the Omigawa-Young encounter at UFC 138 in November.