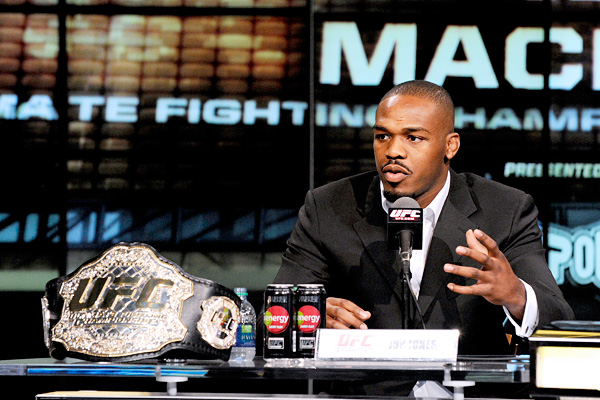 
Someday, mixed martial arts historians will look back on the 2011 campaign of UFC light heavyweight champion Jon Jones and marvel.

Jones retained his 205-pound gold in the UFC 140 headliner on Saturday at the Air Canada Centre in Toronto, as he choked former champion Lyoto Machida unconscious with a standing guillotine 4:26 into round two. In the last 10 months, Jones has become the youngest titleholder in Ultimate Fighting Championship history -- at 23 years, 242 days -- and finished four Top 10 opponents in succession, including three former UFC champions: Machida, Quinton “Rampage” Jackson and Mauricio “Shogun” Rua.

Machida was his latest victim, and though the karateka fared far better than all previous Jones foes, he still wound up unconscious on the canvas. Never before had the Brazilian jiu-jitsu black belt been submitted.

For now, Jones appears to be without peer in the light heavyweight division. However, a number of intriguing challenges lay ahead for the 24-year-old Rochester, N.Y., native, including potential bouts with a former two-division Pride Fighting Championships titleholder and a certain former Jackson’s Mixed Martial Arts teammate.

In wake of UFC 140 “Jones vs. Machida,” here are half a dozen fights we want to see made:

Jon Jones vs. Rashad Evans or Dan Henderson: No matter who faces Jones in the next six to 12 months, he figures to be heavily favored. He carries with him unmatched physical tools, confidence that seems to grow with each outing and the frightening idea that he will likely improve. Evans, who once teamed with Jones at Jackson’s MMA in New Mexico, will lock horns with 2008 NCAA wrestling champion Phil Davis at UFC on Fox 2 on Jan. 28. Should Evans pass that test, he would emerge as the clear No. 1 contender while also providing the promotion a heated rivalry with which to work. If Evans falters, Henderson waits in the wings. The 41-year-old two-time Olympian returned to the UFC on Nov. 19 and outdueled Rua in a leading contender for “Fight of the Year.” His nuclear right hand gives him a chance against anyone, Jones included.

Lyoto Machida vs. Phil Davis: Machida did well against Jones for five-plus minutes, but he wound up on his back in the second round, ate a vicious elbow that sliced open his forehead and found himself trapped in a standing guillotine choke. Though he has tasted defeat three times in his past four bouts, “The Dragon” clearly remains entrenched among the top fighters in the world at 205 pounds. If the unbeaten Davis stumbles against Evans next month, as many suspect he might, a showdown with Machida might prove worthwhile and beneficial for both men. Former champion Forrest Griffin, on the sidelines since UFC 134, also looms as a possible opponent.

Frank Mir vs. Josh Barnett-Daniel Cormier winner: When Mir looks back on his career, he may point to his two victories over Antonio Rodrigo Nogueira as especially significant. In 2008, he became the first man to finish the beloved Brazilian. In their rematch, he went down in history as the first to submit him. No need to rehash the gory details here. Those who witnessed Nogueira’s shoulder come flying off its hinges will never forget it. The UFC could go any number of ways with Mir, who, despite his faults, has pieced together one of the more impressive heavyweight resumes. A matchup with the winner of the Strikeforce heavyweight grand prix -- Barnett and Cormier will meet in the final in 2012 -- could yield a valuable new title contender for recently crowned champion Junior dos Santos, once he recovers from knee surgery and answers potential threats from Brock Lesnar or Alistair Overeem. 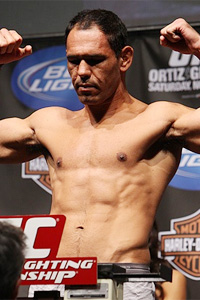 Antonio Rogerio Nogueira
Minotoro bounced back with a win.
Antonio Rogerio Nogueira vs. Alexander Gustafsson-Vladimir Matyushenko winner: Nogueira proved he still has plenty left to offer the 205-pound division, as he battered former champion Tito Ortiz with heavy ground-and-pound to the body en route to a first-round technical knockout. The victory snapped the first two-fight losing streak of the Brazilian’s career. Nogueira’s potent mix of crisp boxing and submission savvy make him a tough out for any light heavyweight lurking in the middle tier. The wily Matyushenko and the surging Gustafsson will go toe-to-toe at UFC 141, with the winner emerging as a sensible foe for Nogueira.

Matyushenko and Nogueira have already faced one another twice before, with each man claiming a win. There is nothing wrong with the idea of a rubber match.

Brian Ebersole vs. Rory MacDonald: He may tilt a little towards the strange side with his chest hair artwork and cartwheel kicks, but no one can deny Ebersole’s ability and experience in the cage.

He put those tools to use in positing arguably the most significant win of his career, as he halted Claude Patrick’s 13-fight winning streak with a hard-fought split decision. An Australia-based American, Ebersole has now won 10 consecutive fights, and, at 31, his best days may still lay ahead of him. Ebersole was originally booked to face MacDonald at UFC 140, but their bout was nixed and Patrick inserted when the highly touted Canadian prospect withdrew with an injury. A matchup between them appears even more appropriate now.

Chan Sung Jung vs. Erik Koch-Dustin Poirier winner: Jung steamrolled former UFC featherweight title contender Mark Hominick in seven seconds, stunning the partisan Toronto crowd in the process. The 24-year-old affords the UFC some flexibility at 145 pounds and gives the promotion a young South Korean star it can get behind. Jung has done nothing short of dazzle since entering the UFC, as he preceded his triumph over Hominick with the first twister-induced submission in the promotion’s long history in his rematch with Leonard Garcia at UFC Fight Night 24. When Koch and Poirier throw down in a showdown between two of the top young featherweights in the sport at UFC 143 on Feb. 4, they may do so with a potential bout with Jung awaiting the winner.