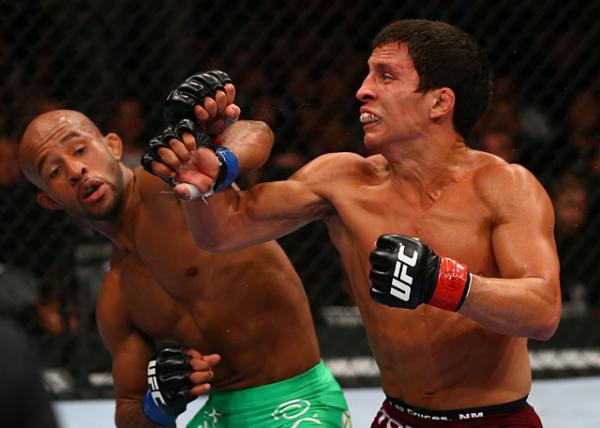 
Joseph Benavidez was hailed by many as the uncrowned champion at 125 pounds. Demetrious Johnson had other plans.

A blinding and breathtaking blend of speed, agility and technique, Johnson captured a split decision from the Team Alpha Male mainstay and became the first flyweight titleholder in Ultimate Fighting Championship history in the UFC 152 “Jones vs. Belfort” co-main event on Saturday at the Air Canada Centre in Toronto. “Mighty Mouse” earned 48-47 and 49-46 marks from judges Jeff Blatnick and Doug Crosby, enough to overcome a 48-47 Richard Bertrand ruling in Benavidez’s favor.

With the mountain that was a four-man flyweight tournament scaled, Johnson must now turn his attention to the real work of a champion: defending the gold. The 26-year-old Kentucky native survived a controversial draw with Ian McCall, won the rematch between the two and then executed a brilliant tactical fight against the favored Benavidez to earn his place atop the 125-pound heap.

Johnson figures to face significant challenges immediately, the first of which will likely come from the winner of the John Dodson-Jussier da Silva showdown at UFC on FX 5 in Minneapolis on Oct. 5.

Dodson finds himself on a career-best four-fight winning streak. One of the sport’s most gifted offensive fighters, the 27-year-old last appeared at UFC on Fox 3 in May, when he earned a unanimous decision over Tim Elliot at the Izod Center in East Rutherford, N.J. Dodson, who won Season 14 of “The Ultimate Fighter” reality series, has never been finished as a professional.

An accomplished submission fighter and devastating positional grappler, da Silva will enter his promotional debut on a string of five straight wins. Once ranked No. 1 in the world at 125 pounds, the once-beaten 27-year-old Brazilian has secured seven of his 14 professional victories by tapout.

In the wake of UFC 152 “Jones vs. Belfort,” here are five other matchups that need to be made:

Dave Mandel/Sherdog.com
Henderson will get a crack at Jones.
Jon Jones vs. Dan Henderson: Everything about how the ensuing months take shape depends upon the severity of Jones’ arm injury. He may have the exited the cage with his belt in tow, but Belfort made sure he gave Jones something by which to remember him. Preliminary reports surfaced about potential nerve damage in the champion’s biceps. That could be a game-changer if true. Outside of injuring his knee, Henderson did nothing to squander the title shot that was promised him. The 42-year-old Olympian and former two-division Pride Fighting Championships kingpin has posted four wins in a row -- equaling the second longest streak of his storied career -- and seven of his past eight, with victories over Mauricio “Shogun” Rua, Fedor Emelianenko, Renato “Babalu” Sobral, Michael Bisping, Rich Franklin and Rousimar “Toquinho” Palhares.

Michael Bisping vs. Chris Weidman-Tim Boetsch winner: Some will call for Bisping to challenge Anderson Silva for the middleweight crown next, and, considering the consistency with which the Brit has performed, it would be hard to mount a legitimate argument against such a bout. However, there are others within the division who can lay claim to the top contender’s slot at 185 pounds. The undefeated Weidman locks horns with Boetsch in a high-stakes middleweight showdown at UFC 155 on Dec. 29, with the winner, like Bisping, putting himself in prime position to vie for promotional gold.

Vitor Belfort vs. Hector Lombard-Rousimar Palhares winner: Belfort accepted a fight against a transcendent champion in a higher weight class on short notice. Win or lose, his stock was not going to take a hit. Belfort figures to return to more realistic middleweight waters in his next outing, and the potential matchups there seem virtually endless and include a long-awaited and recently postponed rematch with longtime rival Wanderlei Silva. Perhaps he should aim higher. Lombard, the former Bellator Fighting Championships titleholder, and Palhares, the leg lock connoisseur, will duke it out at UFC on FX 6 in December, providing yet another option for “The Phenom.”

Joseph Benavidez vs. Ian McCall: Benavidez came up short in his second crack at a divisional championship under the Zuffa banner and now heads back to the drawing board. A rematch with Johnson seems all but inevitable at some point, as the two flyweight dynamos have separated themselves in the 125-pound hierarchy. McCall can certainly feel Benavidez’s pain. After battling “Mighty Mouse” to a controversial draw in March, McCall was victimized by Johnson’s head-spinning skills in their rematch three months later. Both Benavidez and “Uncle Creepy” undoubtedly want another crack at the newly minted champion.

Cub Swanson vs. Dennis Siver-Eddie Yagin winner: Swanson has enjoyed nothing short of a career renaissance since he crossed over from World Extreme Cagefighting. The talented but oft-injured Jackson’s Mixed Martial Arts export was a bit of a forgotten man at 145 pounds after he went a mediocre 4-4 in eight appearances between December 2007 and November 2011. Three consecutive jaw-dropping finishes against George Roop, “The Ultimate Fighter” Season 9 winner Ross Pearson and Brazilian prospect Charles Oliveira have rekindled interest in the 28-year-old and made him a real factor within the division. Siver and Yagin will toe the line against one another in what figures to be a high-impact slugfest at UFC on Fox 5 on Dec. 8 in Seattle. A former lightweight, Siver has won nine of his past 11 fights.