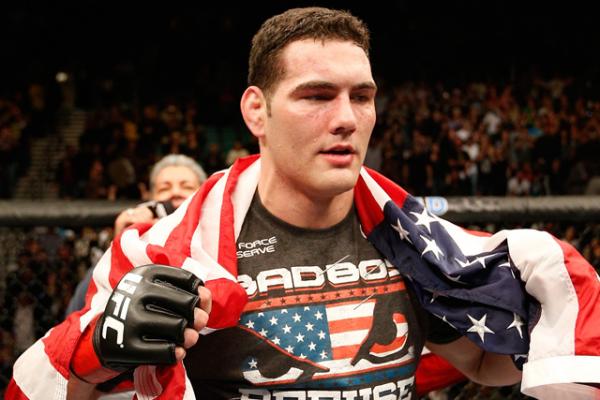 
They had to carry the great Anderson Silva out of the Octagon on a stretcher. No one could have envisioned such a scene.

Silva’s bid to recapture the Ultimate Fighting Championship middleweight crown was brought to an immediate and perhaps career-ending halt, as Chris Weidman retained his title with a second-round technical knockout in the UFC 168 main event on Saturday at the MGM Grand Garden Arena in Las Vegas. Silva fell to the canvas 1:16 into the second round of the highly anticipated rematch, his left leg having been broken above the ankle when the champion checked his kick.

Most believe Silva, who turns 39 in April, has fought his last fight. The unbeaten Weidman, who dethroned “The Spider” in their first encounter at UFC 162 in July, had the Brazilian reeling inside the first five minutes. He landed a clubbing right hand to the side of Silva’s head in close quarters, pursued him to the mat and smashed away with ground-and-pound. Silva managed to withstand the onslaught to see round two. The fate that awaited him there was beyond horrific.

Weidman met an inside leg kick from “The Spider” with knee-to-shin contact, snapping the future hall of famer’s lower leg upon impact. The audible crack left Silva writhing in pain on the ground, brought an unsettling hush over the sold-out crown and left Weidman in charge of the UFC’s middleweight division.

A showdown with a resurgent Vitor Belfort now looms for the 29-year-old champion. “The Phenom” has rattled off three straight victories, all of them finishes, against Michael Bisping, Luke Rockhold and Dan Henderson. In November, he became the first man to ever stop Henderson with strikes, as he put away the former two-division Pride Fighting Championships titleholder with a violent first-round head kick. The 36-year-old Belfort remains a lightning rod for controversy over his use of testosterone replacement therapy, but he has nevertheless emerged as the clear No. 1 contender at 185 pounds.

In the wake of UFC 168, here are six other matchups that ought to be made:

Ronda Rousey vs. Sara McMann: The sweat on Rousey’s armbar-induced submission victory over archrival Miesha Tate had barely dried before Zuffa officials announced she would defend her women’s bantamweight title against a fellow Olympian in McMann in the UFC 170 headliner on Feb. 22. The unbeaten McMann, who won a silver medal in freestyle wrestling at the 2004 Summer Olympics, made her Octagon debut at UFC 159 in April, when she dispatched Sheila Gaff with first-round punches in Newark, N.J. She also owns wins over Shayna Baszler and Hitomi Akano.

Travis Browne vs. Fabricio Werdum: No fighter did more to improve his position at UFC 169 than Browne, who wiped out former champion Josh Barnett with a series of damaging standing elbows 60 seconds into their heavyweight showcase. Now on a short list of legitimate title contenders, Browne will likely have to topple two-time Abu Dhabi Combat Club Submission Wrestling World Championships gold medalist Fabricio Werdum in order to secure his desired crack at heavyweight boss Cain Velasquez. The 31-year-old Velasquez recently underwent shoulder surgery and does not expect to return until late 2014.

Miesha Tate vs. Sarah Kaufman: Having failed in her attempt to upset and unseat Rousey, Tate becomes just another face in a growing crowd at 135 pounds. While she may no longer be in position to contend for UFC gold, Tate remains a formidable stumbling block for others hoping to ascend to the top of the bantamweight division. A former Strikeforce champion, Kaufman saw her promotional debut spoiled in a split decision loss to Jessica Eye at UFC 166 in October. The Canadian striker already has a victory over Tate on her resume, as she recorded a unanimous decision over “Cupcake” at a Strikeforce event in May 2009.

Josh Barnett vs. Gabriel Gonzaga-Stipe Miocic loser: Barnett’s dreams of reclaiming the UFC heavyweight championship were put on hold, perhaps permanently, in a 60-second knockout loss to Browne. The defeat snapped a modest two-fight winning streak for “The Warmaster” and marked the first time he had been finished since he submitted to punches from Mirko Filipovic in the 2006 Pride Fighting Championships open weight grand prix final. Gonzaga and Miocic will duke it out at UFC on Fox 10 in January.

Jim Miller vs. Michael Johnson: A mainstay in the lightweight division since he touched down in the UFC in October 2008, Miller submitted Fabricio Camoes with an armbar 3:42 into their encounter. The 30-year-old AMA Fight Club representative has compiled a 12-3 record inside the Octagon, losing only to Gray Maynard, Benson Henderson and Nate Diaz, all three of whom have either held or fought for UFC gold at 155 pounds. Johnson, meanwhile, won for the fifth time in his last seven outings, as he stopped American Top Team brute Gleison Tibau on second-round punches.

Dustin Poirier vs. Darren Elkins-Jeremy Stephens winner: Poirier was spectacular in dismantling the overweight Diego Brandao, as he dismissed “The Ultimate Fighter” Season 14 winner with punches 4:54 into the first round of their featherweight scrap. Now 7-2 inside the Octagon, the promising 24-year-old Poirier has rebounded well from losses to Chan Sung Jung and Cub Swanson. Elkins and Stephens will collide at UFC on Fox 10 on Jan. 25 in Chicago.