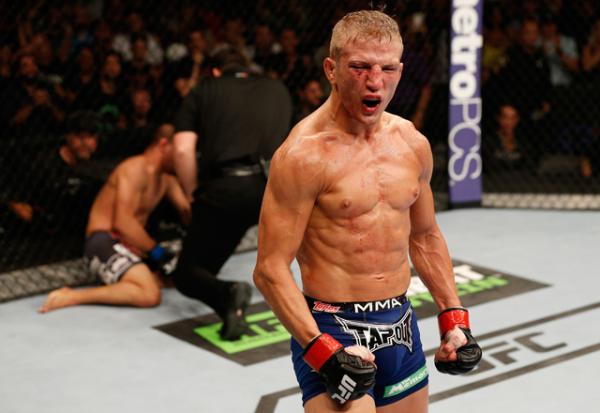 The Team Alpha Male ace turned away Joe Soto with a head kick and follow-up punches, as he strengthened his hold on the Ultimate Fighting Championship’s bantamweight throne in the UFC 177 “Dillashaw vs. Soto” main event on Saturday at the Sleep Train Arena in Sacramento, Calif. Dillashaw sawed through the former Bellator MMA champion 2:20 into round five.

Soto was far more competitive than many had predicted. A last-minute replacement for Renan Barao, he was originally scheduled to meet Anthony Birchak on the undercard. However, the 27-year-old kept his nose in the fight as a heavy underdog under less-than-ideal circumstances, leaning heavily on his ability to counter the champion. Even so, Soto could not keep pace with the UFC’s reigning 135-pound king, who created angles with his footwork and overwhelmed the challenger with volume punching before scoring the late finish.

In wake of UFC 177, here are six matchups that ought to be considered:

T.J. Dillashaw vs. Dominick Cruz-Takeya Mizugaki winner: Dillashaw deftly switched gears when the aforementioned Barao pulled out of their rematch after a weight cut gone wrong. Though his victory over Soto as a prohibitive favorite will likely do little to satisfy his doubters, the confident 28-year-old improved to 7-2 inside the Octagon and further distanced himself from losses to Raphael Assuncao and John Dodson. In short, Dillashaw continues to show measurable gains with each outing. Cruz, a former champion who was forced to vacate the 135-pound title because of injury, will return to the cage for the first time in nearly three years when he locks horns with the resurgent Mizugaki at UFC 178 on Sept. 27.

Tony Ferguson vs. Jorge Masvidal: Non-stop activity on his feet and from his back was the name of the game for Ferguson, who eked out a split decision over Danny Castillo in the co-main event. “The Ultimate Fighter” Season 13 winner threatened Castillo with a brabo choke in the first round, attacked effectively with elbows from bottom position in the second and weathered an attempted arm-triangle choke in the third, as he posted his ninth win in his past 10 appearances. Now 6-1 since arriving in the UFC, Ferguson seems to be a prime candidate for advancement in the 155-pound division. Masvidal would be a logical next step, should he get past James Krause at UFC 178 in Las Vegas.

Danny Castillo vs. Myles Jury-Takanori Gomi loser: Castillo and his stifling top game controlled long stretches of his co-headliner against Ferguson, but his inability to exact a physical toll on “El Cucuy” cost him on the scorecards. The Team Alpha Male mainstay was visibly flustered and frustrated in the aftermath of the split decision setback, as he failed to build on the momentum he attained in a sensational one-punch knockout on Charlie Brenneman at UFC 172. At 35, Castillo’s bid to move beyond the middle tier at 155 pounds may have run its course. Jury and Gomi will do battle at a UFC Fight Night event on Sept. 20 in Japan.

Joe Soto vs. George Roop: Soto stands to gain plenty in defeat, as he introduced himself to the UFC fanbase with an admirable attempt to dethrone Dillashaw in the main event. Though he fell short, the David Terrell protégé proved he belonged in the organization and figures to catch a more manageable opportunity his next time out. A semifinalist on Season 8 of “The Ultimate Fighter,” Roop last appeared at UFC 175 in July, when he was victimized by newcomer Rob Font at the Mandalay Bay Events Center in Las Vegas.

Derek Brunson vs. Uriah Hall: A three-time All-American wrestler at the University of North Carolina at Pembroke, Brunson utilized his base skills in capturing a unanimous decision over Lorenz Larkin and improving to 3-1 within the UFC’s middleweight division. The 30-year-old grounded Larkin repeatedly over the course of their 15-minute encounter, neutralizing the California kickboxer’s stout and creative standup game with overbearing top control. Hall, a former Ring of Combat champion and “Ultimate Fighter” finalist, fought through a grotesque toe injury to defeat Tata Fight Team’s Thiago Santos at UFC 175 in July. He has rattled off back-to-back wins since suffering consecutive split decision losses to Kelvin Gastelum and John Howard.

Carlos Diego Ferreira vs. James Vick: Ferreira in two appearances has made himself a person of interest in the lightweight division. The former Legacy Fighting Championship titleholder dispatched Ramsey Nijem with second-round punches at UFC 177 to keep his perfect professional record intact and strengthen his position on the Ultimate Fighting Championship roster. Ferreira, 29, made his promotional debut at a UFC Fight Night show in June, when he needed a little more than half a minute to submit “The Ultimate Fighter” Season 16 winner Colton Smith with a rear-naked choke. Vick, meanwhile, improved to 6-0 with a unanimous decision victory against Nova Uniao’s Valmir Lazaro on Aug. 23.