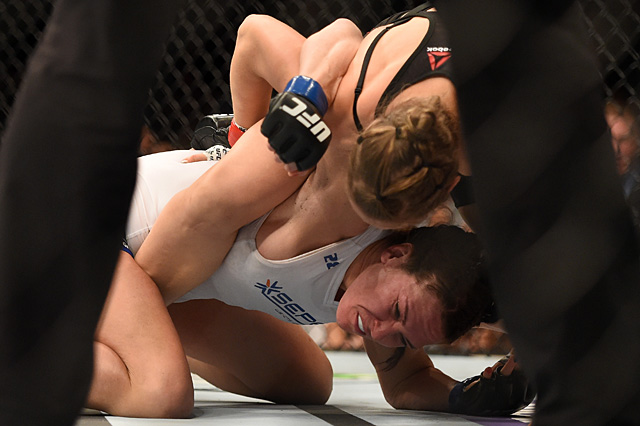 Rousey retained her 135-pound championship with a spectacular first-round submission against the previously unbeaten Cat Zingano in the UFC 184 main event on Saturday at the Staples Center in Los Angeles. She executed a straight armbar on Zingano, finishing the former two-division Ring of Fire titleholder in a cool 14 seconds.

Outside of a much-discussed super fight with reigning Invicta Fighting Championships featherweight queen Cristiane Justino, there are precious few hurdles left for Rousey to clear in MMA. The 28-year-old judoka has turned away her last three challengers -- Zingano, Alexis Davis and Sara McMann -- in a combined 96 seconds. Rousey’s utter dominance has left UFC matchmakers in a bind, tasked with convincing the public to buy into anyone other than “Cyborg” as a legitimate threat to her reign. Good luck.

In wake of UFC 184 “Rousey vs. Zingano,” here are six matchups that ought to be considered:


Ronda Rousey vs. Bethe Correia: Rousey simply operates on another level from every other woman in the UFC. The Olympic bronze medalist has finished all 11 of her opponents as a professional, seven of them in less than a minute; and except for a brief hiccup against Liz Carmouche in her Octagon debut, she has looked all but unbeatable since arriving in the UFC a little more than two years ago. With the aforementioned Justino still trying to prove she can cut to 135 pounds, few viable options remain for Rousey in terms of challengers on the current UFC roster. Correia can at least supply a storyline. The undefeated Brazilian has taken out two of Rousey’s “Four Horsewomen” stablemates: Shayna Baszler and Jessamyn Duke.

Holly Holm vs. Jessica Eye: Perhaps no one could have lived up to the hype that greeted Holm as she entered the cage under the UFC banner for the first time. The Jackson-Wink MMA standout walked away with a split decision over the gritty and determined Raquel Pennington in the co-main event, though for many, her performance left a lot to be desired. Holm never had Pennington in danger and seemed content to chip away with punches and body kicks from the outside, lobbing in the occasional head kick from time to time. She improved to 8-0 in the process but showed she requires further seasoning before vying for the title. Eye last appeared at UFC 180 in November, when she blew up Leslie Smith’s ear and forced a second-round stoppage.

Jake Ellenberger vs. Demian Maia-Ryan LaFlare winner: Ellenberger kept his neck off the chopping block and put an end to his career-worst three-fight losing streak by submitting Josh Koscheck with a north-south choke in the second round of their welterweight showcase. The 29-year-old Reign MMA-trained Nebraskan caught Koscheck in a figure-four guillotine along the fence before transitioning to the fight-clinching choke on the ground. It was Ellenberger’s first submission victory since he tapped Kenneth Allen with an armbar inside the International Fighting Championship organization in March 2006; Allen’s career record stands at 1-37. Maia will lock horns with the undefeated LaFlare under the UFC Fight Night marquee on March 21 in Brazil.

Tony Ferguson vs. Al Iaquinta-Jorge Masvidal winner: Ferguson has become impossible to ignore at 155 pounds. “The Ultimate Fighter” Season 13 winner recorded his fifth straight victory, as he submitted American Top Team’s Gleison Tibau with a first-round rear-naked choke. Since dropping a decision to Michael Johnson in May 2012, Ferguson has rattled off successive wins over Tibau, Abel Trujillo, Danny Castillo, Katsunori Kikuno and Mike Rio; only Castillo managed to go the distance with him. “El Cucuy” now owns an excellent 8-1 record in the UFC. Iaquinta and Masvidal will square off at UFC Fight Night “Mendes vs. Lamas” on April 4 in Virginia.

Tim Means vs. Alan Jouban: A former King of the Cage champion, Means blitzed “The Ultimate Fighter” Season 19 finalist Dhiego Lima with punches, standing elbows and various other close-quarters strikes en route to a first-round technical knockout on the UFC 184 undercard. “The Dirty Bird” has won five of his past six bouts, losing only to the red-hot Neil Magny in that stretch, and seems to have settled in since abandoning a move to 155 pounds in favor of a return to the welterweight division. An undeniably gifted offensive fighter, Means now sports 19 finishes among his 23 pro victories. Jouban, meanwhile, wiped out Richard Walsh with a standing elbow strike and follow-up punches on the main card. He is 10-2 over his last 12 appearances.

Cat Zingano vs. Sara McMann: The what-ifs might just drive Zingano mad. The 32-year-old went right after Rousey, uncorked a flying knee and scored with an ill-advised throw, tossing the champion to the ground. Once they hit the canvas, Rousey transitioned immediately to the challenger’s back and secured the straight armbar for the submission. The fight ran its course in 14 seconds, left no room for an immediate rematch and instead sent Zingano back into circulation at 135 pounds. McMann knows how she feels. Victimized by a knee strike to the body during her brief 66-second encounter with Rousey a year ago, the Olympic silver medalist last competed at UFC 183 in January, when she wound up on the wrong side of a majority decision against Miesha Tate.